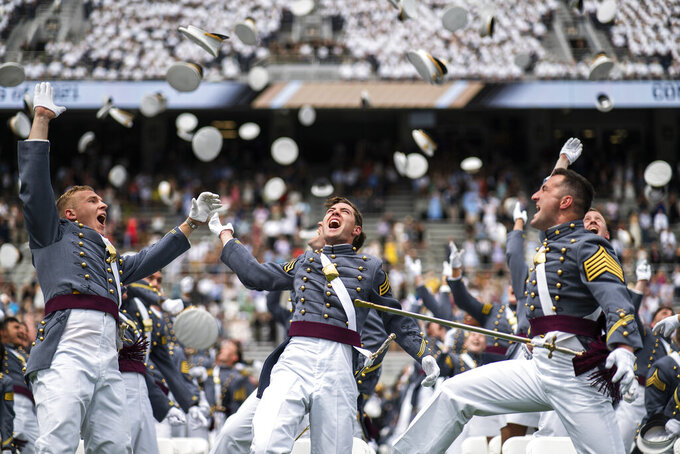 United States Military Academy graduating cadets celebrate at the end of their graduation ceremony of the U.S. Military Academy class of 2021 at Michie Stadium on Saturday, May 22, 2021, in West Point, N.Y. (AP Photo/Eduardo Munoz Alvarez)

Austin spoke to about 1,000 cadets becoming U.S. Army second lieutenants in a ceremony held with pandemic precautions at West Point’s football stadium. Austin, a 1975 graduate of West Point, recalled his own years at the academy as he told graduates their West Point training will keep them on course.

“You’re watching as America’s longest war winds down. And you’re seeing technology change the character of war itself. And even as big and rising powers jostle and compete, you’re seeing new threats from pandemics to terrorism to cyber weapons. And you’re seeing those threats race across borders like a gale,” said Austin, the nation's first Black defense secretary.

“I might, I just might, have a bit of insight into what you’re facing: a democracy under strain, economic fallout, painful issues of racism and discrimination, social tensions and the end of a long and controversial war,” said Austin. “Well, that all sounds pretty familiar to those of us from the Class of 1975.”

West Point's graduation ceremony returned to Michie Stadium a year after the pandemic prompted a change in venue. Last year, then-President Donald Trump spoke to graduates sitting spaced out on the academy’s nearby parade field.

Trump's appearance was criticized as a political move that put the graduates at risk, though the Army said the cadets had to return to campus anyway for final medical checks, equipment and training.

All guests at the ceremony this year were required to provide either a negative COVID-19 test result or proof of vaccination.

Graduating cadets were spaced 3 feet (1 meter) apart on the field. Each graduate was provided with six tickets, instead of 10, which allowed spacing between different families in the stands of the stadium.

“Looking out at all of you, I see the vanguard of a generation. I see patriotic, committed young people coming of age at a hinge in history, who grew up never knowing anything other than a nation at war,” Austin said.

The modified ceremony capped an unusual year at West Point in which COVID-19 forced changes in how the military trained and educated more than 4,000 cadets. West Point also endured fallout from a cheating scandal in which dozens of freshmen were accused of cheating on an online calculus exam in May 2020.

“Probably the biggest challenge that I faced that is unique to this year was leading through COVID," said Cadet Reilly McGinnis, first captain of Corps of Cadets, days before commencement.

As the highest ranking cadet, McGinnis had to explain to her classmates the reasons behind pandemic-related rules, such as why seniors' weekend passes to leave West Point were temporarily restricted.

“There were definitely some negatives in that. But also it opened up the opportunity for us to really come closer as a Corps and spend a lot of time together building cohesive teams we always talk about," McGinnis said earlier this week. "Just getting to know our classmates, spending time with them on the weekends instead of scattering all across the country, going on pass.”