Defining moments that make the Masters unlike other majors 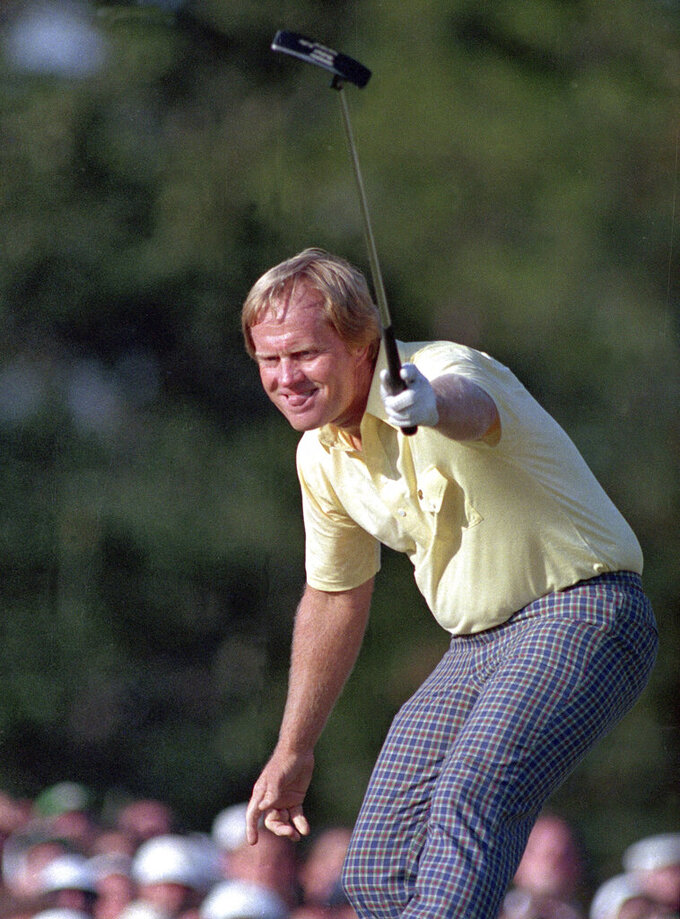 FILE - In this April 13, 1986, file photo, Jack Nicklaus watches his shot go for a birdie, giving him the lead and the title on the 17th hole at the Masters golf tournament in Augusta, Ga. There is no Masters this year because of the COVID-19 pandemic, the first time there is no golf at Augusta National the first full week in April since the end of World War II in 1945. (AP Photo/Joe Benton, File) 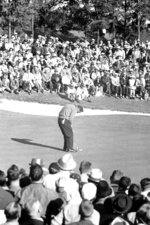 Gene Sarazen hit the shot that put the Masters on the map.

Jack Nicklaus made the ground shake with a charge that gave meaning to the Masters not really starting until the back nine on Sunday. Arnold Palmer had his army. Sam Snead slipped on the first green jacket.

There is no Masters this week because of the COVID-19 pandemic, the first time there is no golf at Augusta National the first full week in April since the end of World War II in 1945.

There is no shortage of memories, the moments that define this major unlike any other.

“Gary Woodland at the U.S. Open, hit pitch shot on the 71st hole will last forever. But I don't remember many more shots,” Fred Couples said. “You start talking about Augusta over and over and over ... so many magical things happen.”

THE SHOT HEARD 'ROUND THE WORLD

The Masters wasn't even the Masters in 1935. It was the Augusta National Invitation Tournament, the second edition. Craig Wood was the presumed winner, in the clubhouse at 282, until one shot changed everything.

From the fairway on the par-5 15th, 235 yards away, Sarazen hit 4-wood that bounced just short of the green, hopped on and rolled into the cup for an albatross 2. That tied him for the lead, and he beat Wood in a 36-hole playoff the next day.

Reports vary how many people actually witnessed the shot. In later years, Sarazen joked that 22 people saw it, and 22,000 said they did. One spectator was club co-founder Bobby Jones, who later said the swing was so perfect “one knew immediately it was a gorgeous shot.”

It was the shot that sent the Masters on its way. And it was the start of so many more.

Nicklaus was at his most dominant when he set the scoring record in 1965 and beat Palmer and Gary Player by nine shots. He was at his best in 1975 when he outlasted Tom Weiskopf and Johnny Miller, which Nicklaus said this week was “the most fun from a competitive standpoint.”

But it was the sixth victory, in 1986, that remains the most popular.

Nicklaus played the final 10 holes in 7 under — a 30 on the back nine — to become the oldest Masters champion at 46. The birdie putt on the 17th gave Nicklaus the lead. But it was the 5-iron to 4 feet on the par-3 16th that was vintage Nicklaus. “Be good,” his son, Jackie, said as the shot was in flight. Nicklaus stooped to pick up the tee and replied, “It is.”

Palmer's power and charisma arrived about the same time as television, making him golf's most beloved figure and the Masters' must-see TV. It was the perfect marriage, especially when he birdied the last two holes, hitting 6-iron to 6 feet on the 18th, to win in 1960.

The year after his first victory, in 1958, soldiers from Fort Gordon announced the arrival of “Arnie's Army.” The army expanded across the world over the next half-century, but it took root at Augusta. And it was a big part of golf's first boom in popularity.

Twenty-two years after Lee Elder became the first black player in the Masters, Woods became the future of the game. His power was so great he was hitting pitching wedge into a par 5. He broke 20 records in 1997 when he became the youngest champion at age 21. That launched “Tigermania,” an era that led to big TV contracts and record prize money.

For the next two decades, the Sunday red shirt got nearly as much attention as a green jacket.

Augusta National members began wearing green jackets in 1937 so the patrons would know who to ask if they had any questions about the tournament. It wasn't until 1949 that the Masters champion — Sam Snead — was presented one.

It now is the most famous piece of clothing in golf. Only the Masters champion can take it home with him for the year.

Nicklaus won it six times. But it wasn't until 1998 that Nicklaus had a jacket of his own. The club keeps several jacket sizes available for the winner. For reasons unknown, Nicklaus didn't have his own when he returned from his first victory in 1963. He wore the jacket belonging to former New York Gov. Tom Dewey. He eventually had his own clothing company make one.

Nicklaus finally got his own jacket from Augusta National 12 years after winning his last Masters.

Weiskopf holds the Masters record for most runner-up finishes (4) without ever having won. But no other player embodies heartache at Augusta National more than Greg Norman.

Larry Mize chipped in from 140 feet to beat him in a playoff in 1987. The year before, Norman sent a 4-iron into the gallery and made bogey on the last hole to finish one behind Nicklaus.

His legacy at Augusta was cemented in 1996, however, when he blew a six-shot lead to Nick Faldo. It remains the only time a player lost a six-shot lead in the final round of a major.

Herbert Warren Wind gave the 11th, 12th and 13th holes at the Masters the nickname. At the heart of Amen Corner is Rae’s Creek in front of the 12th green. The list of players who made it perhaps the most famous hole in golf is long.

Fred Couples had a shot hang up on the bank to win in 1992. Norman, Jordan Spieth and Francesco Molinari were among those who saw the Masters slip away when their shots did not.

Woods' first Masters was a watershed moment. His fifth green jacket last year was the most emotional. The most significant was in 2001, when he became the only player to hold the four professional majors at the same time.

He was grilled about that historic chance for seven months. And then he beat Phil Mickelson and David Duval on the back nine to capture all four majors in a span of 294 days.

Mickelson had 22 wins on the PGA Tour without a major, and it took his best to shed the label as the best player without one. He birdied five of his last seven holes in 2004, none more memorable than his 18-footer on the 18th that swirled around the cup. Mickelson leaped in the air with his legs apart, arms raised, a mixture of joy and disbelief on his face.

The Masters now is the only major to use sudden death for a playoff. Fuzzy Zoeller in 1979 was the first winner with a birdie on the 11th hole. Sergio Garcia was the most recent in 2017 on the 18th. Faldo did it twice, both times on the 11th hole. The most memorable was Bubba Watson, who hooked a gap-wedge 40 yards out of the trees.