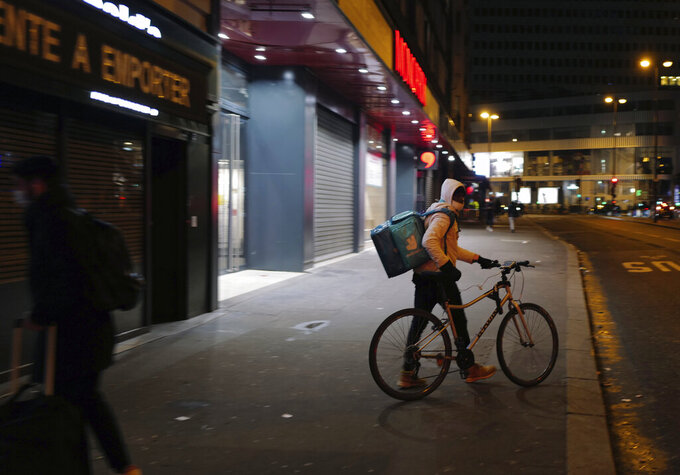 FILE - In this file photo dated Monday Feb. 15, 2021, a Deliveroo food delivery worker pushes his bike in front of restaurant in Paris. Shares in the app-based meal delivery service Deliveroo tumbled by as much as a third in their U.K. stock market debut on Wednesday March 31, 2021. (AP Photo/Francois Mori, FILE)

LONDON (AP) — Shares of app-based meal delivery service Deliveroo, which saw its business boosted by pandemic lockdowns, tumbled by as much as a third in their U.K. stock market debut on Wednesday.

The London-based company's shares slid even after they were priced at the bottom of the potential range, reflecting investor wariness about whether Deliveroo could turn a profit and broader market turbulence for tech-related stocks.

The slump also reflects a growing backlash against “gig economy" companies, with half a dozen leading U.K. fund managers abstaining from the IPO amid concerns about working conditions for Deliveroo's delivery riders, and its shareholder structure.

Shares in Deliveroo Holdings, which competes with Uber Eats and whose backers include Amazon, ended the day down 26% from their offer price of 390 pence, after falling as much as a third in early trading.

Deliveroo's initial public offering was one of Europe's biggest and most hotly anticipated this year. The company raised 1 billion pounds ($1.4 billion) from selling new shares, while existing shareholders sold another 500 million pounds worth of shares, in a stock market listing that values the company at 7.6 billion pounds.

Founded by CEO Will Shu, an American ex-banker, Deliveroo operates in a dozen countries in Europe and Asia. Every month more than 6 million customers order food from restaurants and shops through the Deliveroo app, according to its prospectus.

Bicycle and scooter riders lugging insulated bags in the company’s signature robin’s egg blue are ubiquitous on the streets of London.

“In this next phase of our journey as a public company we will continue to invest in the innovations that help restaurants and grocers to grow their businesses, to bring customers more choice than ever before, and to provide riders with more work,” Shu said in a statement.

Deliveroo has never turned a profit since it was founded in 2013 though it benefited last year from the coronavirus pandemic, which helped narrow its annual loss to $309 million. Lockdown restrictions sent demand for takeout food soaring and increased its overall transactions, but analysts wonder if the lift will last.

“The pandemic has offered a structural growth opportunity, but it’s worth asking if lockdowns mean things are as good as they will ever be for a takeaway service," Sophie Lund-Yates, an equity analyst at Hargreaves Lansdown, said in a research note. "The longer-term outlook depends on how demand holds up in a post-pandemic world, and if that road to profitability looks any clearer.”

Wave Roberts, a Deliveroo motorcycle rider in Reading, England, said any pandemic revenue bump “came out of our pocket as couriers,” because the company has been cutting its fees.

Deliveroo pays up to 3.30 pounds for a delivery up to 1 mile from a restaurant, down from 5.10 pounds three years ago, said Roberts, who's also vice chair of a couriers' union. After deducting expenses including fuel, insurance and taxes, Roberts takes home about 7 pounds an hour, less than the U.K. minimum wage.

As part of the IPO, Deliveroo promised longtime riders bonuses of up to 10,000 pounds. Roberts, who didn't get anything, dismissed it as a public relations exercise by the company “to make them look ethical and friendly."

Some of the U.K.’s biggest fund managers lost their appetite for investing over similar concerns. One fund manager, M&G, said Deliveroo's reliance on gig workers presented a risk to “the sustainability of its business model."

Having a flexible workforce has been key to the company's success, but the threat of tighter regulation looms. The U.K.'s top court recently ruled that Uber drivers should be classed as “workers" and not self-employed, entitling them to benefits such as minimum wage and pensions.