Demand for delivery boosts UPS revenue, but costs rise too 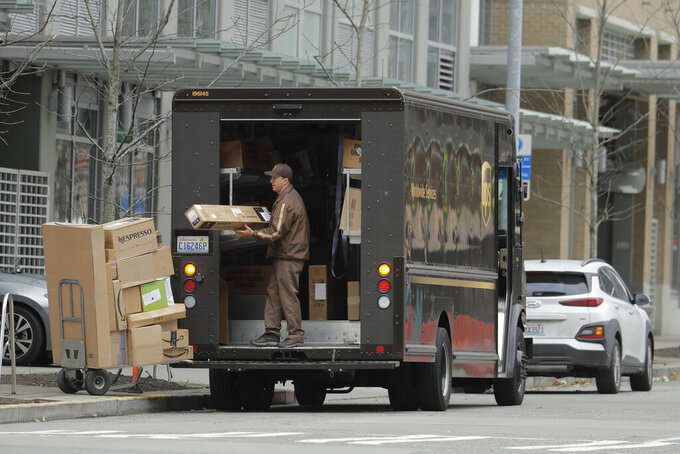 Profit and revenue are rising at UPS, whose brown delivery trucks have become omnipresent on neighborhood streets during the pandemic, but so are costs.

The company reported Wednesday that third-quarter profit rose 12% to $1.96 billion. With higher volume of packages to deliver, revenue climbed 16% to $21.24 billion. Both figures beat expectations.

However, operating profit in the company’s key U.S. package business was nearly 10% less profitable than a year ago because of higher costs as UPS hired workers and expanded service.

With so many people getting what they need delivered to the front door, drivers for United Parcel Service Inc. are staying busy. The company's consolidated average daily volume jumped 13.5%.

Prices were roughly constant, with the average price per piece rising for U.S. ground shipments and slipping slightly for express deliveries like next-day air.

Unlike the domestic package business, profit rose in the company's international package and freight units.

New CEO Carol Tome said the results were led by strong demand for shipments leaving Asia and growth among small and medium-sized businesses. She said the higher profit indicates that the company's “better, not bigger” strategy is working.

Tome said the company is ready for the crucial dash from around Thanksgiving until Christmas, when daily volumes spike.

“We have been operating in a peak-like environment globally for many months, which is helping us prepare for the elevated demand ahead,” she told analysts.

The analysts, however, were concerned about rising costs.

Colin Scarola, an analyst at CFRA Research, said he was disappointed to see operating profit in the U.S. domestic package business fall 9% even as revenue rose 15% — and thinks the problem may be temporary.

“We think UPS is seeing rapid cost increases amid surging demand, but over time we see margins expanding significantly in this segment as it adjusts to much greater volume,” he said in a note to clients.

Matt Arnold, an analyst for Edward Jones, said rising volumes are challenging the company, but he thinks investment in automating UPS facilities will help boost profitability.

UPS and rival FedEx are benefitting from high demand for shipping and less competition in airfreight, as the number of passenger planes carrying cargo in their bellies has declined. The boom, however, has put pressure on their networks, a major concern heading into the peak holiday shipping season.

Atlanta-based UPS said that profit, adjusted to exclude non-repeating items, was $2.28 per share. That was 42 cents more per share than Wall Street expected, according to a survey by Zacks Investment Service.

UPS, like many other companies, is no longer giving financial forecasts because of uncertainty around its business during the pandemic.

UPS shares have nearly doubled since May, reflecting the pickup in the delivery business. Despite Wednesday's sell-off, which left the shares at $155.78, they are up 33% since the beginning of the year, compared to a 1% gain in the S&P 500 index.