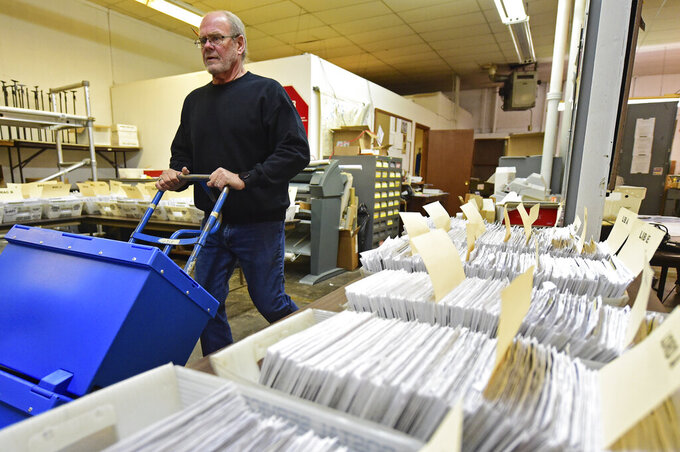 “In a state that has set the bar for extreme anti-voter laws, this proposal actively takes steps to put Ohio further back in the fight for access to the voting booth," Ohio Democratic Chair Liz Walters said in a statement. “By limiting Ohioans’ ability to vote and by sowing confusion, statehouse Republicans are once again attacking the fundamental right to vote in this state.”

Walters called the bill, whose details were released late Thursday, worse for voters than an overhaul of voting protocols that Georgia undertook after former President Donald Trump's repeated, baseless claims of election fraud.

Republican state Rep. Bill Seitz, a Cincinnati Republican who is sponsoring the Ohio bill, told The Associated Press earlier this week that he's been working on the legislation for months. He said it is not intended to suppress voters but to incorporate changes sought by Democrats, Republicans, election officials and voter advocates.

“Happily for Ohio, the reforms we have already implemented helped to ensure that there were only minimal complaints about the Ohio election results in 2020,” a co-sponsorship request he circulated Thursday to fellow lawmakers said. "But there is always room for improvement in safeguarding the integrity of election processes.”

The bill would “automate” voter registration in the state by allowing Ohioans to opt in while they're doing business at the Bureau of Motor Vehicles, but Walters said that should not be confused with “automatic” voter registration, which entails the government registering all eligible citizens without them having to take additional steps.

It also would create an online system for requesting absentee, or mail-in, ballots — as Republican Secretary of State Frank LaRose and voting rights advocates have long sought. However, the web form would entail two-step identity authentication with two separate forms of acceptable identification, up from the one form required now to request such a ballot by mail.

Walters pushed back against that as a voter suppression tactic. Her party also criticized two provisions of the bill for which bipartisan state or local election officials have lobbied: eliminating early voting on the Monday before the election, which presents logistical processing difficulties; and moving back the deadline for requesting an absentee ballot from three days to 10 days before the election.

During the 2020 pandemic-affected election, support grew for that latter change amid concern that it would be impossible to guarantee both an absentee application and a return ballot could get through the U.S. mail in such a short time.

Seitz’s legislation also would prioritize the order of forms of identification that voters can present, so that they may not use the last four digits of the social security number many have committed to memory if they have been issued an Ohio driver’s license or state ID card. For those without the other forms of ID, a provision says they can use electronic versions of their bank statements or utility bills rather than hard copies.

Perhaps most irritating to the Ohio Democratic Party is Seitz's decision to include in the bill a permanent prohibition on placing ballot drop boxes at various spots around a county, rather than only at the county board of elections.

The party fought a long legal battle last year against LaRose's one-per-county location limit on drop boxes, which surged in use and popularity in Ohio and nationally as a convenience during the pandemic. While that court fight upheld LaRose's right to establish the rule, it also established legally that there was nothing preventing him from allowing multiple drop box locations, say, at post offices or libraries.

Seitz's bill would explicitly prohibit that, answering LaRose's call for legislative clarity on the issue — though with a different result than the elections chief had said he supported. The legislation will, however, allow the drop box practice that Ohio began solely as a result of COVID-19 to continue into the future with at least three receptacles on county election board property.