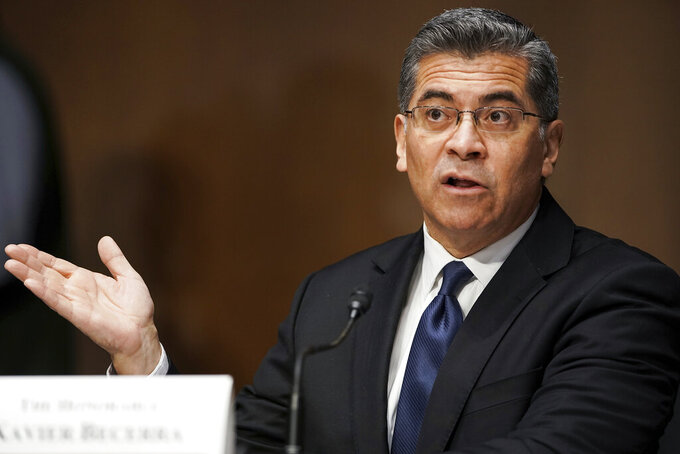 In this feb. 24, 2021, photo, Xavier Becerra testifies during a Senate Finance Committee hearing on his nomination to be secretary of Health and Human Services on Capitol Hill in Washington. President Joe Biden’s pick for health secretary is taking heat for his defense of abortion rights from a tag team of Republicans looking to define him —and the new administration— as out of the mainstream. (Greg Nash/Pool via AP)

The Senate Finance Committee split along party lines, 14-14, earlier this month on the nomination of Xavier Becerra. While a tie vote in the past has often stalled a nomination, it proved to be more of a speed bump for Democrats than a stop sign under the Senate's new rules.

Senate Majority Leader Chuck Schumer, D-N.Y., forced a vote to discharge Becerra's nomination Thursday that succeeded 51-48. The vote clears the way for floor debate on confirming him to the position.

“I’m perplexed that none of my Republican colleagues would vote for him,” Schumer said before the vote. “He’s a capable man. He’s worked hard to make sure that people get health care.”

“There’s a reason Mr. Becerra could not get one single Republican vote to move out of committee,” McConnell said. “It’s because he’s such a thoroughly partisan actor with so little subject matter expertise.”

The action puts Biden one step closer to filling the top position at the Department of Health and Human Services, a department that is playing a key role in the federal response to the COVID-19 pandemic. Sen. Susan Collins, R-Maine, was the lone Republican to vote for advancing Becerra's nomination.

Becerra now serves as California’s attorney general and previously represented the Los Angeles area for more than 20 years in the U.S. House. As attorney general, he specialized in trying to block Trump administration actions, filing nine lawsuits alone on Trump’s final full day in office and taking the Trump administration to court more than 120 times in four years.

Sen. Ron Wyden, the Democratic chairman of the Senate Finance Committee, cited Becerra’s experience as a lawmaker on the House Ways and Means Committee and as attorney general while urging the Senate to support Schumer’s discharge motion. He said that Becerra has been in charge of a $1 billion budget and more than 4,000 employees.

“This is the work of somebody who really knows how to run a mammoth government agency,” Wyden said.

“A number of President Biden’s nominees have been qualified, mainstream candidates,” Thune said. “Xavier Becerra is not a mainstream candidate. He’s an extremist who has used the offices he has held to advance an aggressively pro-abortion agenda and to target religious liberty and freedom of conscience.”

Becerra, 63, was a reliable Democratic vote for abortion rights during his tenure in the House. But he wasn’t a leading voice. His issues were immigration, access to health care and education.

Perceptions changed after Becerra was appointed California attorney general in 2017. He sued the Trump administration over its restrictions on abortion, though his office says that only four of the 124 lawsuits Becerra filed against the previous administration dealt with abortion, birth control or conscience rights — key issues for religious conservatives.

Becerra went all the way to the U.S. Supreme Court to defend a California law that required crisis pregnancy centers to provide information about abortion — and lost.