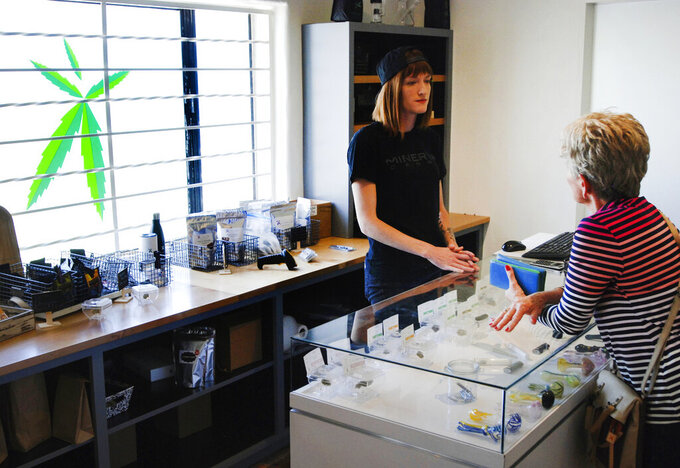 FILE - In this June 11, 2019, file photo, store manager Ruby Amsden, left, attends to medical marijuana customer and retired nurse Jan Stewart, who uses cannabis to relieve pain associated with her recovery from bone cancer and help with sleeping, at the Minerva medical cannabis dispensary in Santa Fe, N.M. Legislation to legalize cannabis in New Mexico advanced Thursday, March 18, 2021, toward a decisive Senate floor vote under a framework that emphasizes government oversight of pricing and supplies and social services for communities where the criminalization of pot led to aggressive policing. (AP Photo/Morgan Lee, File)

SANTA FE, N.M. (AP) — A proposal to legalize recreational marijuana in New Mexico confronted its last last major hurdle in Senate deliberations on Friday, as legislators pushed to send the bill to a supportive governor.

The state Senate scheduled a vote on a House-approved bill that legalizes cannabis sales and consumption for anyone 21 and older, levies a new 12% tax on cannabis and emphasizes support for communities where the criminalization of pot led to aggressive policing.

Gov. Michelle Lujan Grisham has pushed for the broad legalization of marijuana in efforts to spur employment and economic recovery from the pandemic and is expected to sign the legislation if given the chance. That would make New Mexico the 16th U.S. state to authorize recreational marijuana sales.

The bill includes close government oversight of cannabis production levels and pricing. It emerged from months of infighting among advocates, as legislators discarded a Republican-sponsored bill that that emphasized low taxes in an effort to stamp out illicit weed.

New Mexico flirted with cannabis legalization in the 1990s, when then-Gov. Gary Johnson challenged taboos against decriminalization in defiance of Republican allies. A medical marijuana program founded in 2007 has since attracted more than 100,000 patients.

But the Democrat-dominated Legislature has been reticent to legalize recreational sales and use— until now. Several hardline opponents of legalization in the state Senate were voted out of office by Democrats in 2020 primary elections, in a shift that paved the way for Friday’s historic vote in the Senate.

In the November election, neighboring Arizona was among four states to approve recreational marijuana by ballot initiative.

New Mexico's Constitution doesn't allow direct voter approval of statutes, leaving lawmakers to follow in the footsteps of Illinois and Vermont by legalizing through the legislative process.

The bill opens opportunities for small craft-marijuana producers to maintain 200 plants under a micro-license system that combines cultivation, manufacturing of pot products, sales and lounges for social consumption of cannabis.

Medical marijuana would become tax-free, with provisions for subsidized cannabis for poor patients. And past drug convictions of any kind would not preclude people from securing an industry license.

Democratic Sen. Joseph Cervantes fears the proposed regulatory framework will create a powerful, government-protected monopoly with unforeseeable consequences. He warned against the creation of a new breed of business cartel like liquor license holders that have closely guarded their access to the marketplace.

Republicans including state party chairman and former Congressman Steve Pearce say legalization only complicates the state’s struggle with high rates of poverty and opioid addiction. But several Republican state legislators have openly advocated for legalization with safeguards for roadway and workplace safety.