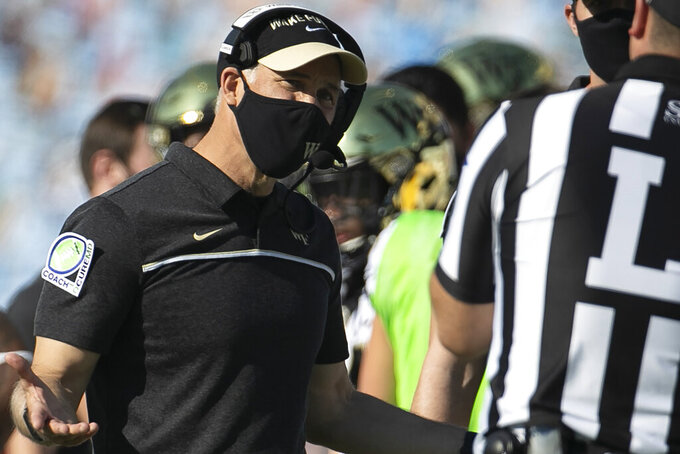 Wake Forest and Florida State both waited nearly a month to play a game amid pauses and schedule changes due to the coronavirus pandemic.

At least they're getting one last chance at a normal gameweek routine.

The Demon Deacons host the Seminoles on Saturday in a late addition to the schedule as the Atlantic Coast Conference juggled postponements and make-up games. The teams weren’t scheduled to meet when the ACC released its 10-game league schedule in late July.

Both teams played last weekend in their first action since Nov. 14. FSU (3-6, 2-6 ACC) beat Duke while Wake Forest (4-4, 3-4) lost at Louisville, struggling in its return after losing nearly two weeks of practices amid a pause on team activities.

“Sunday practice, it’s been a while since we did that,” safety Keegan Good said. "Then obviously a Tuesday practice, just getting back in the routine of being in a game week. I think it’s better for the guys.”

In the weeks since that mid-November loss at North Carolina, Wake Forest saw games against Duke, Miami and No. 2 Notre Dame fall off the schedule.

Meanwhile, FSU had matchups against No. 4 Clemson (Nov. 21) and Virginia (Nov. 28) called off the day of the games due to coronavirus concerns. The ACC eventually swapped FSU's Dec. 5 trip to Duke for last weekend's home game with the Blue Devils and added added this trip to Wake Forest.

The Seminoles are trying to win consecutive games for the first time this year.

“We're such a young team that being able to handle success and winning a game and the mindset of what you bring in your preparation, it all has to get better,” FSU first-year coach Mike Norvell said.

Some things to know about Saturday's FSU-Wake Forest game:

The reshuffled schedule ensures that the Demon Deacons and Seminoles will have played every year since FSU joined the ACC for the 1992 season, with the Seminoles winning 23 of 28 in that span. The Demon Deacons won last year's meeting 22-20, snapping a seven-game series skid.

It's unclear whether Wake Forest will have defensive end and NFL prospect Carlos “Boogie” Basham Jr.

Basham didn't play last week and tweeted that he was recovering from COVID-19. Clawson said the decision to play is "really going to be his call.”

“We're going to be very, very cautious and careful with him,” Clawson said. “That guy has done everything right in our program. ... And we're not going to do anything to jeopardize his football future if he doesn't feel that he's 100%.”

FSU finished with a season-high 324 yards in the 56-35 win against Duke and scored six rushing TDs against an ACC opponent for only the second time. Its 522 total yards marked its best output since amassing 432 yards in the upset of then-No. 5 North Carolina on Oct. 17, which had marked FSU's last win before beating the Blue Devils.

Florida State is shorthanded at receiver and had running backs account for 10 of 14 receptions in the Duke win, including true freshman tailback Ja’Khi Douglas tallying two touchdown catches.

Tamorrion Terry, a 1,000-yard receiver in 2019, opted out midseason. Ontaria Wilson, the team’s top receiver with 30 catches for 382 yards, was injured in the first half against Duke and is uncertain for Saturday.

The NCAA has waived bowl-eligibility requirements to allow as many teams as possible to reach the postseason. Asked if FSU would accept a bid, Norvell deflected by saying the Seminoles were “excited to be able to play this game, this week.”

“There’s just this theme of we didn’t do all this work to only play seven or eight games,” he said, adding: “We're going to play as many games as they’ll let us. If they let us play in two bowl games, we’ll try to find a way to do that.”