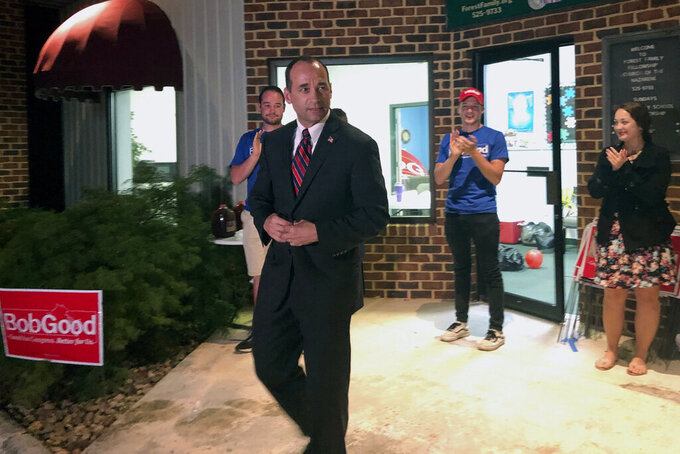 CHARLOTTESVILLE, Va. (AP) — In a rustic Virginia district that bounced its Republican congressman after he officiated a same-sex wedding, the battle to replace him pits a self-described “biblical conservative” backed by President Donald Trump against a Black doctor who worked in Barack Obama’s White House.

The district, which stretches from Washington’s far suburbs to the North Carolina line, has elected just one Democrat for a single two-year term this century. Trump carried it by 11 percentage points in 2016. Yet Democrats are spending money to go after it.

The contest between Republican Bob Good and Democrat Cameron Webb will answer whether a Black candidate with an expertise in health care can prevail in a traditionally conservative area during a pandemic and a time of racial reckoning. It’s also an example of how both parties are pursuing a handful of districts that might seem a reach.

Democrats are contesting over a dozen seats from New York's Long Island to Alaska where Trump won by at least 10 percentage points, usually a daunting margin. Republicans have fewer viable targets but are spending serious money in places like South Florida and central California where Trump lost badly four years ago.

Marking the efforts' seriousness, at least one side’s outside groups are spending $1 million or more in most of these races. The expenditures come during an election when the question isn’t whether Democrats will keep their House majority but how large it will be.

Democrats have more opportunities because of the suburbs' continuing flight from Trump, GOP retirements and primaries that produced some weaker candidates, and a fundraising edge that lets them spend amply.

“The political environment is tough, so it’s forcing us to shore up key defensive seats,” said Dan Conston, president of the Congressional Leadership Fund, a big-spending political committee aligned with House GOP leaders. But he said strong candidate recruitment "has created great pick-up opportunities for us to win back seats in surprising places.”

The paramount factor is Trump, whose unpopularity is wounding numerous GOP congressional contenders. Trump compounded his problems recently with his fuming debate performance against Democratic rival Joe Biden, his COVID-19 diagnosis and his scoffing at the perils of a virus that's killed over 216,000 Americans.

“Strategists on both sides see a very real potential for a total blood bath on Election Day for Republicans, for the president,” said Brendan Buck, who advised former House Speaker Paul Ryan, R-Wis., explaining Democrats' spending. “If there's a wave, you don't want to leave any opportunity behind."

“We're on offense this cycle, and we didn't get here by accident,” said Lucinda Guinn, executive director of the Democratic Congressional Campaign Committee, the party's House political arm.

In Virginia, Good snatched the GOP nomination from Rep. Denver Riggleman last spring, winning a drive-through convention at a church forced by the pandemic and giving Democrats an opening. Riggleman, a mainstream conservative, had angered some voters by officiating at the wedding of two male aides.

Democrats consider Good, a born-again Christian and former athletics official at nearby evangelical Liberty University, too conservative for the area. One political committee that backs scientist candidates is on track to spend $2 million for ads supporting Webb, according to the ad-tracking firm Kantar/CMAG. House Democrats' campaign organization may spend another $1 million and has produced a spot attacking him.

Webb, 37, also has a law degree and worked on health and criminal justice policy as a White House fellow under Obama and Trump. He's cast himself as a pragmatist, saying in an interview, “My view on any issue is rooted in, what does the data tell us?”

Good, 54, has made religion his campaign centerpiece. Ads by him and the Congressional Leadership Fund accuse Webb of favoring defunding the police, which Webb has said he opposes. The leadership fund has mapped spending $750,000 for Good, while the House GOP political committee has spent over $300,000.

On a recent afternoon in Charlottesville, a liberal enclave where a young counter-protester was killed during a 2017 white nationalists’ rally, self-described Republican Marcie Siegel, 64, said she'd voted for Webb because of his moderate stances. “The party doesn’t represent me now at all,” she said.

Farmer and convenience store owner Charlie Mitchell praised Good’s support for gun rights and his lengthy marriage. He said Democrats favor “getting rid of the police," adding, “I don’t see how any sensible person could vote for one of them.”

House Democrats' political arm has spent over $800,000 in a Trump-friendly western Colorado district after restaurant owner Lauren Boebert upset Rep. Scott Tipton in a GOP primary. Boebert has voiced support for QAnon conspiracy theories, though she's since backtracked. The conservative Club for Growth Action committee has spent $1.3 million in a seat Republicans hadn't anticipated being contested.

“Trump has created the environment, and I think Democrats have capitalized on that,” said Molly Murphy, a Democratic strategist.

In both races, each side's outside groups are spending millions.