Dent in the pipeline: NHL draft-eligible players take a hit 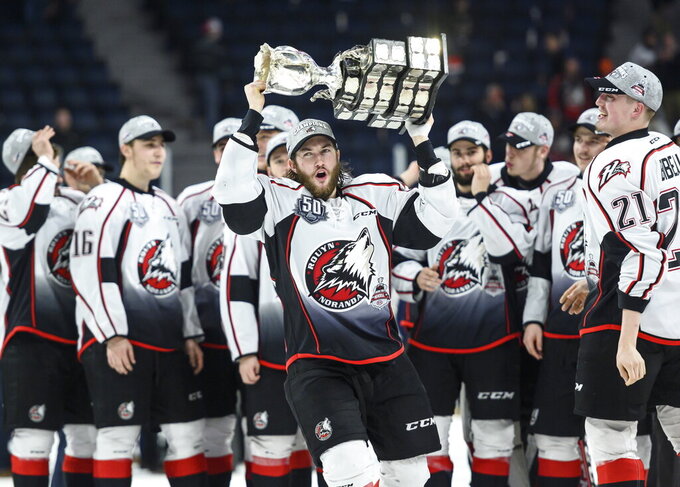 FILE - In this May 26, 2019, file photo, Rouyn-Noranda Huskies' William Cyr, center, celebrates with teammates after a win over the Halifax Mooseheads to win the Memorial Cup hockey championship in Halifax, Nova Scotia. The Memorial Cup championship for the Canadian Hockey League was canceled for a second consecutive year because of the pandemic. The Ontario Hockey League on Tuesday, April 20, 2021, abandoned its plans to hold a season, a move that complicates the evaluation of many players eligible for the 2021 NHL draft. (Darren Calabrese/The Canadian Press via AP, File)

A few years from now, Brandt Clarke might be able to brag he took the Auston Matthews path to the NHL by playing in Europe during his draft year.

“He kind of went over voluntarily,” Clarke said. “I went over out of desperation.”

Clarke and other 2021 draft-eligible prospects were forced to different paths this season when their leagues couldn't stage a season because of the pandemic. Clarke was supposed to play for Barrie in the Ontario Hockey League, which on Tuesday abandoned plans to play this season, a move that plunged countless young players into uncertainty during a year that has put a dent in hockey's developmental pipeline.

“There’s a lot of my friends in my age group that didn’t play this season, and, yeah, that sucks,” said Clarke, who is 18. “Some of them have grown a lot as players and could have taken huge steps in their draft years and whatnot. It’s hard to base your draft off a 16-year-old's season, and now that’s what a lot of them are getting based off of.”

Players in the U.S. college system and Europe got through mostly full seasons and the Western Hockey League and Quebec Major Junior Hockey League got back on the ice. In Ontario, where OHL Commissioner David Branch believes his league is the best in the world at producing professional players, Canadian provincial restrictions forced many to go in another direction.

Clarke, a 6-foot-1 defenseman expected to go in the top five in the July draft, played 26 games in Slovakia. Francesco Pinelli joined the Alps Hockey League in Central Europe. They and fellow projected first-round pick Corson Ceulemans will get to play in front of scouts at the under-18 world championships this month in Texas, but that showcase won't include many draft-eligible players.

“That’s just the cream of the crop,” Columbus general manager Jarmo Kekalainen said. “There’s going to be some players that, had they had the chance to show us this year what their development might be, they probably could have gotten into the top and now people are going to be relying on their underage reports and knowledge that you had before.”

Players know that. GMs and scouting directors know it, too. And the U18s are just one chance to see (some) players before a draft in which more than 200 will be selected.

“You’re going to have a year of missed opportunity to view, to see where they’re at and how they’ve progressed, and you’re going to make your evaluations based on a year earlier,” Washington Capitals GM Brian MacLellan said. “We’ve been trying to do as many things as we can video-wise, so there’s probably a sense of frustration — probably a sense of frustration on the players that they don’t get to show where they’re at.”

Ceulemans is thankful for his eight games with Brooks of the Alberta Junior Hockey League this season, which got underway before a three-month pause. During the break, the 17-year-old defenseman shot pucks in his garage, worked out when possible and attempted not to check in too much on his draft stock.

“It’s hard not to look,” he said. “But just not reading too much into it because it’s just such a weird year and not everybody’s had a chance to play.”

U.S. college players — including projected No. 1 pick Owen Power of Michigan — in Europe and in other Canadian junior leagues got more of a chance than those in Ontario.

NHL scouts will check the video and do their best to figure out how some players would have progressed this season. Most teams felt fortunate to be able to find places for their top prospects to play, whether in Europe or the American Hockey League.

That doesn't make this year's draft any easier.

“It’s much like last year’s draft: You don't have a combine, you don't have a lot of different things and it’s different, but this whole world is different,” San Jose GM Doug Wilson said. “The whole hockey world, the business of our society is different and you can’t worry about those things you can’t control. You’ve got to just say: ‘OK, I’m not going to make excuses. I’ve got to go find an answer and a solution to it.'”

That's how Clarke, Ceulemans, Mason McTavish and other top prospects are coping.

“Roll with the punches,” Clarke said. “I wish I could have played in Barrie and been with my friends and been with my Barrie Colts team, but I’m still really happy I got to play hockey this year and in a cool environment. ... I think I made the best out of my situation.”

With that in mind, team executives aren't wasting any time feeling sorry for themselves because they couldn't scout players in person or get the full picture of what they can do on the ice.

“I’m mostly thinking of those kids, that it’s their draft year, they haven’t gotten a chance to put their best foot forward," Tampa Bay GM Julien BriseBoise said. "They haven’t got a chance to showcase themselves at such an important juncture in their career. In the grand scheme of things, this isn’t making or breaking their career, but I know it means a lot to those kids from an emotional standpoint, so I mostly feel for them.”

Goaltender Carey Price is probably the Canadiens' best bet to carry them far in the playoffs. He is out for at least the next week because of concussion protocols after a collision with Edmonton's Alex Chiasson on Monday night. Montreal will lean on Jake Allen between the pipes to try to hold on to fourth place in the North Division.

First place in the East Division will be at stake when the Washington Capitals visit the New York Islanders for games Thursday and Saturday on Long Island. They meet again in the District of Columbia on Tuesday.