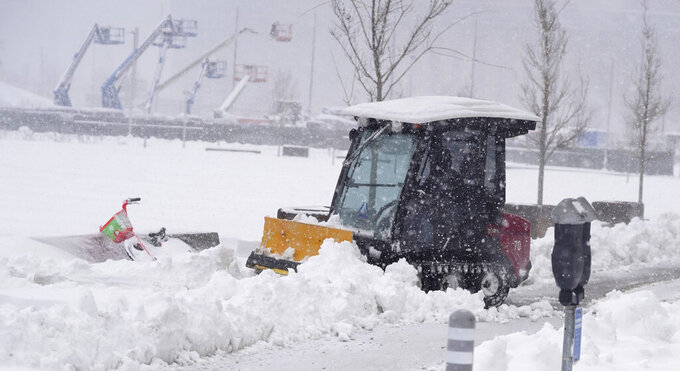 A maintenance worker uses a plow as a snowstorm rips across the intermountain West Sunday, March 14, 2021, in Denver. Forecasters are calling for the storm to leave at least another six inches of snow during the day before moving out on to the eastern plains. (AP Photo/David Zalubowski)

DENVER (AP) — Denver's airport reopened Monday after a powerful late winter snowstorm dumped over 3 feet of heavy, wet snow on parts of Colorado and Wyoming, shutting down roads, closing state legislatures in both states and interfering with COVID-19 vaccinations.

The 27 inches (68 centimeters) that had fallen by the end of Sunday at Denver International Airport on the plains east of downtown made it the fourth biggest snowfall in the city’s history, according to the National Weather Service in Boulder.

The storm system, fueled by moisture from the Gulf of Mexico, had moved out of the region and into northeastern Nebraska by Monday, said Evan Direnzo, a meteorologist for the weather service in Boulder.

"It’s definitely behind us,” he said of the storm's snow and wind.

There was still plenty of digging out to do. Denver's airport runways were closed just before noon on Sunday due to blowing snow and poor visibilities and some stranded passengers spent the night at the airport. With the sun shining Monday, over 200 plows worked to clear the snow and ice and reopen four of the airport's six runways, enough to meet demand following a number of flight cancellations, airport spokesperson Emily Williams said.

In Wyoming, the National Weather Service warned that driving would remain dangerous for the next several days there because of slick and snow covered roads.

Some trucks and other travelers were stranded in eastern Wyoming where several major roads remained closed Monday, including routes in and out of the cities of Cheyenne and Casper. Large portions of Interstate 70 had been closed across eastern Colorado but reopened in the afternoon. The Colorado State Patrol told drivers of cars that had to be abandoned along roadways and then towed to look for their vehicles in the nearest large parking lot near the exit where it was left.

The U.S. Postal Service said many post offices would be closed in Colorado on Monday and mail delivery in many locations would be severely curtailed or suspended.

Federal officials shut down vaccine shipments to the region as the storm neared so the vials packed in dry ice wouldn’t spoil during mail delays, Wyoming Department of Health spokeswoman Kim Deti said.

“We think they’ll be at least a couple days,” Deti said. “Nobody is quite sure when things will be cleared and reopened.”

The storm also was keeping many people from getting to vaccine locations, Deti noted.

In the Denver metro area, all bus routes were suspended but limited train service was operating, including from downtown’s Union Station to the airport.

The Colorado Avalanche Information Center warned of “dangerous” avalanche conditions in many areas of the state, including the mountains along the Front Range. It urged backcountry users to avoid areas of new snowfall prone to wind drifts that could help trigger large snowslides on what has been a particularly unstable snowpack this season. Colorado has reported 11 avalanche deaths this winter.

The blizzard was a double-edged sword for ranchers — bringing moisture that will green up spring pastures after months of dry weather but hitting as cows give birth to calves or care for their newborns, said Jim Magagna, executive vice president of the Wyoming Stock Growers Association.

“I certainly have some concerns about those who are in calving and don’t have indoor shelter to put those cows in,” Magagna said Monday. “I’m sure they’re all out there doing the best they can to save calves right now.”