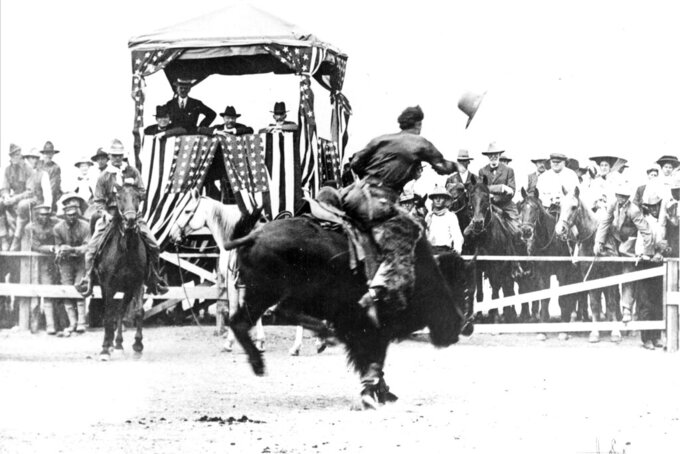 This photo provided by the Wyoming State Archives shows former president Theodore Roosevelt, seated at center on the stand, watching the Cheyenne Frontier Days rodeo in Cheyenne, Wyoming. Cheyenne Frontier Days has been held for 123 straight years. The organizers are holding out hope the event scheduled for July won't be interrupted by the coronavirus pandemic. (Wyoming State Archives via AP)

Billed as the “Daddy of ‘em all,” Cheyenne Frontier Days has been held for 123 straight years. But the clock on the festival’s website ticking toward the launch of the 10-day jubilee in July serves as a constant reminder that concerns are mingled with the hopes for this year's event.

Concern: The coronavirus pandemic could interrupt the festival that drew more than 262,000 people and raked in nearly $28 million for the county in 2019 with a mix of rodeo events, musical acts, food and carnival rides.

Hope: There's still time to carry on a streak that began in 1897.

“Through all the wars, through the Depression, we've never missed a year,” said CEO Tom Hirsig, whose event is scheduled from July 17-26. “We've put ourselves in a position where it certainly wouldn't be the end of Cheyenne Frontier Days, but it could change the face of it to miss a year.

The numbers from 2019 illustrate the importance of the event to Wyoming's capital city: The ticketed attendance for rodeos, concerts and other events was 262,466. That added up to visitors spending $5.3 million for restaurants and bars; $10.8 million in shopping, gas and other retail; and $7.6 million for entertainment/recreation.

The festival also creates more than 300 full- and part-time jobs.

What's more, it's a chance for heads of businesses from around the state — from around the country, really — to see the city teeming with activity and to talk shop. In recent years, a Microsoft data center opened in Cheyenne, along with a gun parts manufacturer and cryptocurrency operations.

“It’s a good PR tool for us and has been for a long, long time," said Dale Steenbergen, president and CEO of the Greater Cheyenne Chamber of Commerce. “You can go way back — people came to Cheyenne and wanted to be part of its Western nostalgia."

Hirsig was born and raised around Cheyenne. He said his great- great-uncle happened to be one of the founders of Frontier Days.

Naturally, he's versed in Frontier Days history: Sometime around 1897, a Union Pacific railroad executive saw a group of cowboys loading a wild horse on a rail car. The executive was amazed at their talent.

The idea was formed to start a festival that tested a cowboy's skills in bronco busting and steer roping.

Only, it got too dark to complete. So the next year it was expanded to two days.

Eventually, the event blossomed to 10 days.

The festival has become famous around the world and Cheyenne has inspired many a song mention (Garth Brooks: “The Beaches of Cheyenne,” George Strait: “ I Can Still Make Cheyenne ”).

“It's the Kentucky Derby, a place where people want to go,” Hirsig said.

Now, Frontier Days plays the waiting game with concerts and festivals on pause around the globe to counteract the spread of COVID-19.

This year's installment could see around 1,800 cowboys/cowgirls — along with 2,000 animals — competing in everything from barrel racing to bull riding. The musical lineup includes country artists Eric Church, Thomas Rhett and Shelton.

There are parades, rides, games and even a free pancake breakfast, which will serve around 100,000 flapjacks.

“I hope we get to provide everything we've provided in the past,” Hirsig said. "But there are a lot of things we can't control besides the coronavirus. What happens to our night-show acts? Do some of them cancel their tours? We're hearing positive things.

"They're glad we're being positive."

Growing up, Hirsig's family was among the regulars at Frontier Days. They would close their ranch and venture to the festival. His earliest recollection was watching the cast of "Gunsmoke" perform at the event. He doesn't even recall a stage, just them riding their horses up and down the track and playing to the crowd.

Now, the seating capacity for the nightly concerts is more than 20,000.

All the big names have shown up — from country singers (Johnny Cash, Reba McEntire, Strait, Brooks) to rock legends (Aerosmith, Bon Jovi). Last summer, the event brought in Post Malone to attract a younger crowd. It worked; the rapper's show sold out in four days — a record for the festival.

In this setting, the rodeo takes center stage. The riders compete in what's billed as the “world’s largest outdoor rodeo arena,” with a seating capacity of 15,000. The “Daddy of ’em all” moniker was coined around 1919 with Cheyenne gaining the reputation as one of the top rodeos.

It remains revered by cowboys and one of the most lucrative stops on the rodeo circuit.

“It's no different than Fenway Park or Madison Square Garden," said Sage Kimzey, the reigning six-time Professional Rodeo Cowboys Association bull-riding world champion. “It’s just one of those on the top of the list.”

Jim Hearne is one of the more than 2,500 volunteers who helps. He's been involved since 1976 and in an array of roles, including the art show. Although he spends his winters in Florida these days, he always returns.

“You get to meet great people, work side-by-side to put on a great celebration," said Hearne, who was born in Hanna, Wyoming, and grew up in Laramie.

“Time is still on our side,” Hirsig said. "Just not a lot of time.”