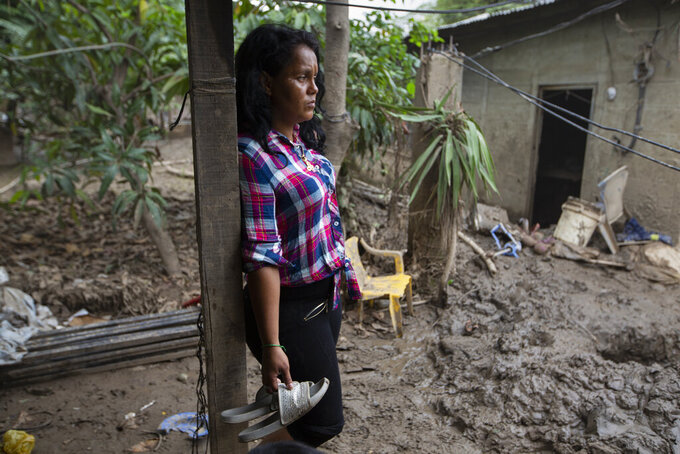 Nory Yamileth Hernandez stands at the property where she lived with 11 others, including her three teenage children, before it was flooded by last year's hurricanes Eta and Iota in San Pedro Sula, Honduras, Tuesday, Jan. 12, 2021. Hernández, 34, said she had joined the first big migrant caravan hoping to reach the U.S. in October 2018 but didn’t make it to Mexico before turning back, and is sure she will try again soon. (AP Photo/Moises Castillo)

SAN PEDRO SULA, Honduras (AP) — Nory Yamileth Hernández and her three teenage children have been living in a battered tent under a bridge on the outskirts of San Pedro Sula since Hurricane Eta flooded their home in November.

They were there in the dust under the rumbling traffic, surrounded by other storm refugees, when Hurricane Iota hit barely two weeks later. And when the first migrant caravan of the year shuffled by in January, only fear and empty pockets kept them from joining Honduras’ growing exodus.

“I cried because I don’t want to be here anymore,” the 34-year-old Hernández said. She had joined the first big caravan in October 2018, but didn’t make it to Mexico before turning back. She’s sure she will try again soon. “There’s a lot of suffering.”

In San Pedro Sula, Honduras’ economic engine and the departure gate for thousands of Honduran migrants in recent years, families like Hernández’s are caught in a cycle of migration. Poverty and gang violence push them out and increasingly aggressive measures to stop them, driven by the United States government, scuttle their efforts and send them back.

The economic damage of the COVID-19 pandemic and the devastation wrought by November's hurricanes have only added to those driving forces. Word of a new administration in the U.S. with a softer approach to migrants has raised hopes, too.

After her failed attempt to migrate in 2018, Hernández returned to scraping out a living in San Pedro Sula. Last year, she sold lingerie door-to-door in one of the country’s most dangerous neighborhoods. But the storms wiped out her inventory and her customers had limited ability to pay her for items they bought on credit.

“I couldn’t charge people because we all lost,” Hernández said. “We all have needs, but you have to be sensitive. They don’t have anything to pay with and why go to collect?”

Chamelecon is a neighborhood of low, tin-roofed houses and small shops with barred windows on the outskirts of the city. Only two of its streets are paved, including one that is the dividing line between the rival gangs Mara Salvatrucha and Barrio 18.

At the bridge where Hernández’s tent is pitched, tattooed youths smoke marijuana and residents slop around in rubber boots. The violence continues, with newspapers talking about finding bodies wrapped in plastic.

In December, Hernández got sick with fever, nausea and, she said, her brain hurt. She went to a hospital, but was never tested for COVID-19. In January, her eldest son writhed in their tent with fever.

The father of her youngest son lives in Los Angeles and encouraged her to get money together for another trip. “He told me that this year is going to be good because they had gotten rid of Trump and the new president was going to help migrants,” Hernández said.

Hernández recently found work cleaning flooded streets, but she still hasn’t been able to tackle the house where she once lived with 11 others. It’s still filled with several inches of mud and foul water.

The assembly plants that surround San Pedro Sula and power its economy are still not back to pre-hurricane capacity amid the pandemic.

The Sula Valley, Honduras’ most agriculturally productive, was so heavily damaged that international organizations have warned of a food crisis. The World Food Program says 3 million Hondurans face food insecurity, six times higher than before. The dual hurricanes affected an estimated 4 million of Honduras’ 10 million people. The area is also Honduras' hardest-hit by COVID-19 infections.

“It’s a vicious cycle," said Dana Graber Ladek, head of the International Organization for Migration office in Mexico. “They’re suffering poverty, violence, the hurricanes, unemployment, domestic violence, and with that dream of a new (U.S.) administration, of new opportunities, they’re going to try (to migrate) again and again.”

The last several attempted caravans have been foiled, first in Mexico and later in Guatemala, but the daily flow of migrants moved by smugglers continues and has shown signs of increasing. The hope and misinformation associated with the new U.S. administration helps that business too.

“The traffickers are using this opportunity of desperation, of political changes in the United States to spread rumors and false information,” Graber Ladek said.

In January, San Pedro Sula was abuzz with plans to migrate.

Gabriela, 29, feeling like she had nothing to lose, went north just days before a few thousand Hondurans headed out of San Pedro Sula on Jan. 15. She had lost her cleaning job in the pandemic and the rest of her life to the hurricanes. She asked that her full name be withheld because she had made it to southern Mexico and feared being targeted.

Gabriela paid a smuggler, paid off authorities along her route and walked through jungle as part of her journey north.

She had lived in La Lima, a suburb of San Pedro Sula. Small businesses there have begun to reopen, but in outlying neighborhoods, the streets are still full of debris, dead animals, snakes and burning mattresses.

“Everyone wanted to leave,” said Juan Antonio Ramírez, an elderly resident. His children and grandchildren were among some 30 people who spent six days stranded on a corrugated metal roof surrounded by floodwaters in November. “A lot of people went from here, but they all came back. The problem is there’s a barrier and they send them back from Guatemala.”

After the 2018 caravans and rising number of migrants at the U.S. border in early 2019, the U.S. government pressured Mexico and Central American countries to do more to slow migration across their territories. Numbers fell in the latter half of 2019 and Mexico and Guatemala effectively stopped caravans in 2020. In December, a caravan leaving San Pedro Sula didn’t even make it out of Honduras.

But the U.S. has reported a rising number of encounters at the border, showing that beyond the caravans, the migration flow is increasing again.

In September, Lisethe Contreras’ husband made it to Miami. The La Lima resident said it took him three months and $12,000 paid to smugglers. She’s thinking of going too, but for the moment has her small business selling necessities.

Biden has promised investment in Central America to get at the root causes of immigration, but no one expects to see any change soon. Honduras’ primary elections are scheduled for March and nongovernmental organizations worry any aid will come with political strings attached.

Hernández admits confusion and disillusion. “I don’t know. ... They all promise and then don’t follow through,” she said. “I don’t see a good future here.”

Gabriela, already halfway to her goal of reaching the U.S., has no thoughts of turning back, even after 19 people, believed to be mostly Guatemalan migrants, were found shot and burned in northern Mexico just across from Texas.

“I only go back to Honduras if Immigration sends me back,” she said. “And if that happens I’ll try again with my son.”