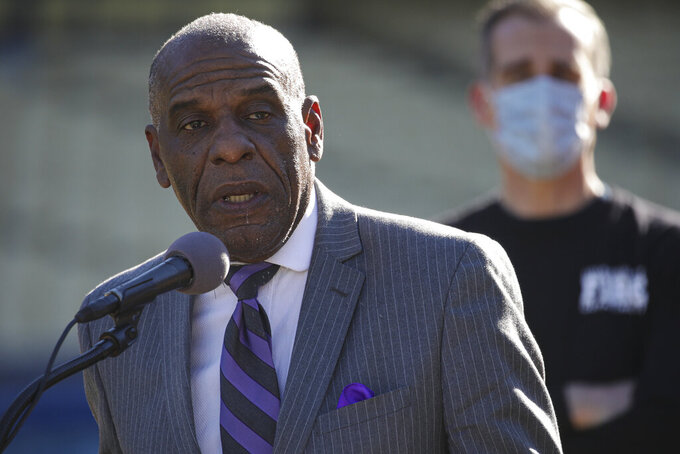 FILE - In this Jan. 15, 2021, file photo, state Sen. Steven Bradford, D-Gardena, addresses a press conference at Dodger Stadium in Los Angeles. While some cities are moving ahead, the efforts have largely stalled in the states. Bradford, who will serve on the state's reparations task force, said the effort succeeded because of the commitment from the bill's author, now-Secretary of State Shirley Weber, support from the Legislative Black Caucus and the state's governor, Democrat Gavin Newsom. (Irfan Khan/Los Angeles Times via AP, Pool, File)

LOUISVILLE, Ky (AP) — During last summer’s reckoning over racial injustice, decades-long debates about whether to offer reparations to the descendants of slaves in the U.S. finally seemed to be gaining momentum.

State lawmakers in California, Maryland, New Jersey, New York and Oregon — where Democrats control the legislatures — introduced or hoped to revive proposals to study the possibility. It turns out the wait for reparations will continue.

The state efforts have mostly stalled, raising questions about whether they can win enough support to succeed on a wide scale. California is the only state to approve a commission to study reparations statewide and how they might work.

“We need a federal reparations bill, but I don’t know when we’ll get there," said Maryland state Del. Wanika Fisher, a Democrat who introduced legislation there to create a reparations task force. "Hopefully we will ... but I think states should be accountable.”

Her bill received a committee hearing but never made it any further during this year's legislative session, which ended earlier this month. It's similar in the other states. Bills that would study the possibility of statewide reparations in New Jersey, New York and Oregon have been parked in legislative committees.

That mirrors the outlook in Congress. A committee in the U.S. House, which is controlled by Democrats, advanced a decades-old bill that would establish a reparations commission, but its prospects appear dim in the evenly divided Senate where it's unlikely to generate enough support to overcome a filibuster.

“A lot of our legislation and the things we work on are all Band-Aids on the issue of institutional racism, class inequality and the host of other issues that stem from that,” said Fisher, who plans to reintroduce her bill next year. “But we’ve never fully tackled what’s at the heart, what’s the cancer, what’s the disease?”

The lack of progress reflects the nation's conflicting views on whether reparations to atone for slavery are necessary. A 2019 Associated Press-NORC Center for Public Affairs Research poll found that the vast majority of Black Americans — 74% — favored reparations, but less than a fifth of white Americans did.

Maryland resident Lynda Davis believes a lack of education on the subject keeps many white Americans from supporting the effort. Davis, who is white, belongs to Coming to the Table, a national organization made up of descendants of those who were enslaved and slaveholders.

“I think getting people to make that leap is sometimes a challenge," said Davis, who submitted written testimony in support of the state reparations effort. ”It’s trying to help people see the ongoing harms, like this summer. I think more white people are getting it now, which is hard because it seems like people should have gotten it before now.”

Davis points to local efforts as an example of what grassroots activism around the issue can achieve.

In March, Evanston, Illinois, became one of the first U.S. cities to offer Black residents reparations. The city council in Asheville, North Carolina, voted unanimously last July in favor of reparations for Black residents that would take the form of helping businesses and providing housing and health care. Other local governments, including in Amherst, Massachusetts, Providence, Rhode Island, and Iowa City, Iowa, are considering whether or how to grant some form of reparations.

Frederick introduced a measure that would create a task force and issue cash payments to Black Oregonians who can document they are descendants of slaves. He plans on reintroducing it if it doesn't succeed this year.

“It’s going to take a lot of states saying that this is something we have to do before we actually get something done at the national level,” he said.

Though Oregon wasn’t a slave state, its constitution explicitly barred Black settlers, a provision that wasn't repealed until 1927. Many of the state’s Black residents had to contend with discriminatory housing and employment practices well into the 20th century.

The nation’s racial reckoning amid the COVID-19 pandemic and police killings of Black Americans have only intensified the need for reparations, Frederick said. Earlier this month, he sponsored a successful resolution urging Congress to create a reparations commission.

“It was so obvious,” he said of his legislation. “The reparations bill is basically to say, ‘OK, now we’ve talked about it, now we see it, now it’s no longer seen as something that’s fantasy.'"

California state Sen. Steven Bradford, who will serve on the state's reparations task force, said the effort succeeded because of the commitment from the bill's author, now-Secretary of State Shirley Weber, support from the Legislative Black Caucus and the state's governor, Democrat Gavin Newsom.

He said other states, whether led by Democrats or Republicans, have yet to come to terms with the extent of systemic racism in the country.

“I think it’s a sad state of affairs, but it’s a reality of who we are as a nation,” Bradford said.

While valuable, the ongoing debates at the state and local level should not take away from the need for a federal reparations program, said Duke University economist William Darity, who partnered with his wife, A. Kirsten Mullen, on a study that outlines how cash payments could fix the racial wealth gap.

They said the consequences of slavery are national in scope, not merely localized.

"The federal government is the one that created these policies, and in some instances ignored its own policies, and that is who should pay this debt,” Mullen said.

Black lawmakers and other supporters say federal action also is needed because so few of the state and local discussions about reparations are happening in the South, where the majority of descendants of slavery live.

Without a federal program, Black Americans such as Lisa Hicks-Gilbert, are unlikely to benefit.

Hicks-Gilbert, of Elaine, Arkansas, is a descendant of survivors of the 1919 Elaine massacre, one of many episodes of racial violence against African Americans in the early 20th century. When Black sharecroppers in the town joined together to negotiate for fairer terms and wages, they were attacked by white mobs. More than 200 Black men, women and children were killed.

She doesn't believe that federal reparations will happen in her lifetime. But through her work as an advocate for descendants of the massacre, Hicks-Gilbert is pushing for legislation that would have the state officially recognize the killings and set up educational opportunities.

While she acknowledges it will take time to get there, the promise is enough to keep her going, even in moments of doubt.

“That’s what’s in my heart to do — to continue and finish what they started,” she said.