Digital and drive-in, film festivals try to salvage a season 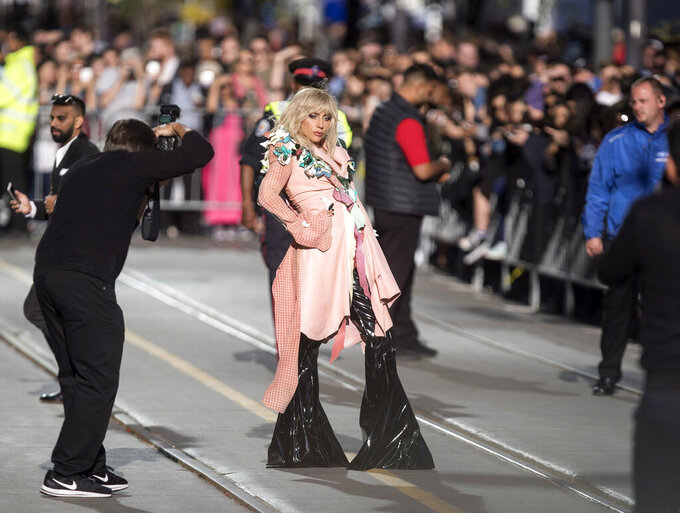 FILE - Lady Gaga is surrounded by press and security as she walks down Toronto's King Street for the screening of "Gaga: Five Foot Two" at the Toronto International Film Festival in Toronto on Sept. 8, 2017. This year, three of the four major fall film festivals, including TIFF are going forward despite the pandemic. Those at the Venice Films Festival acknowledge it hasn’t been anywhere near the same. Masked moviegoers in set-apart seats. A barrier walls off the red carpet to discourage crowds of onlookers. Greetings are kiss-less. TIFF opens on Thursday. (Chris Young/The Canadian Press via AP, File)

NEW YORK (AP) — This is normally the time of year when flashy premieres march down red carpets and proclamations of Oscar buzz circle the globe. An avalanche of new films topples onto screens. The movie houses of Venice, Telluride, Toronto and New York shake with applause. The movies, more than ever, feel alive.

This year, three of the four major fall film festivals – all but Telluride, which had to cancel – are going forward despite the pandemic. But the movies are a sliver of what they normally are. Most premieres in North America will be held digitally or at drive-ins. For a season predicated on badge-wearing throngs and marquee movies, it’s meant rethinking what a film festival is. Or maybe just doubling down on a mission.

“A situation like this forces you to assess what is fundamental,” says Dennis Lim, director of programming for the New York Film Festival. “What do you really need for a festival to happen? You need films and you need audiences. It’s our job to select the films and put them in front of audiences in a meaningful way. If we can’t do that in a cinema, what can we do?”

The answers, for the programmers of the New York Film Festival and the Toronto International Film Festival, will begin unspooling later this week. TIFF opens on Thursday with the premiere of Spike Lee's David Byrne documentary “American Utopia.” New York follows Sept. 17 with Steve McQueen's “Lovers Rock.” Venice, the world’s oldest festival, has been running since last week.

Those in Italy acknowledge Venice hasn’t been anywhere near normal. Masked moviegoers sit in set-apart seats. A barrier walls off the red carpet to discourage crowds of onlookers. Greetings are kiss-less. A little bit of the romance of movies has gone out.

But not all of it. Jury head Cate Blanchett said it was kind of “miraculous” that the festival was happening at all. Pedro Almodovar compared months of lockdown to a prison. “The antidote to all this is the cinema,” he said.

Unlike the canceled Cannes Film Festival in May or the improvised virtual edition of SXSW, Venice has managed to host an in-person festival, albeit at a much reduced scale. Toronto and New York are aiming for hybrid festivals. New York has partnered with Rooftop Films to hold drive-ins in Brooklyn and Queens far removed from the festival’s home at Lincoln Center.

Toronto is doing likewise but also with indoor screenings (of just 50 people) at his downtown hub, the TIFF Bell Lightbox. The festival is currently mandating mask-wearing only when moving around a theater, not during the show. Even days before opening night, indoor screenings aren't completely off the table for New York, should the state’s theaters be reopened.

Both New York and TIFF have, with the same provider, launched digital platforms to host virtual screenings. A limited number of tickets will be available, but the festivals’ reaches will actually expand. Anyone in Canada will be able to buy tickets to TIFF screenings, and New York Film Festival films will be briefly available nationwide.

Still, the major studios aren’t sending any films, nor is Netflix. The postponement of the Academy Awards to late April hasn’t helped. The normal calculus of Oscar season, in which buzz is often built first at the festivals, is on a different timetable this year.

Tom Bernard, co-president of Sony Pictures Classics, believes the race may have changed but the importance of festivals in it remains. The specialty label has several films heading to the festivals including the hit Sundance documentary “The Truffle Hunters” and “The Father,” with Anthony Hopkins and Olivia Colman.

“We’ve got movies that we’re certainty trying to put into the Oscar race. The festivals certainly do that because that’s been the brand of the festivals for a long time. That hasn’t changed," said Bernard. "It gives our movies the distinction that rises them above anything that’s streaming and positions them for the theatrical experience, which will be coming back in the future."

But it’s also unlikely the festivals — used to having the spotlight for a week or two — will attract the same attention in a year when many have far more pressing concerns than sneak peaks of upcoming films.

“We feel that even though there’s a very harsh reality right now, stories are more important than ever,” said Joana Vicente, executive director and co-head of TIFF. “We also need to think about all of the artists who have been affected who need festivals to really give them a platform. This will ensure that the culture stays alive.”

Many filmmakers don’t want to simply sit out the pandemic. They want to reach audiences however they can, and join conversations like those that have followed the death of George Floyd. McQueen, who has three films from his Small Axe anthology at the festival, called Lim a week after Floyd’s death.

“There was a reason they wanted to get this film out now,” said Lim who heads NYFF with festival director Eugene Hernandez. “He had dedicated the films to George Floyd and he wanted us to take a look.”

Tommy Oliver’s “40 Years a Prisoner,” about the face-off between Philadelphia police and the Black liberation group MOVE that led to a violent raid in 1978, had been planned for release next year but will instead debut at TIFF ahead of airing on HBO in December. Through Michael Africa Jr., the grown son of two incarcerated MOVE members, the film captures the long scars left on families and communities by police abuse. Helping audiences understand the history of today’s tragedies, Oliver feels, is vital.

“The thing that was the hardest was that Mike and his family wouldn’t get the experience of having an audience watch it at a festival. I’ve had it before and it’s an incredible thing,” says Oliver. “But Toronto is an incredible platform. Most of the time, we don’t get to do things exactly as we envision them. It’s about figuring out how to adapt and move with whatever comes up. Is this ideal? No. Will it work? Yes.”

The lineups at these festivals are still more than you might expect. TIFF boasts new work from Chloe Zhao, Spike Lee, Werner Herzog and Frederick Wiseman. New York has some of those, too, along with films from Sofia Coppola, Christian Petzold, Jia Zhangke, and Garrett Bradley’s acclaimed Sundance entry “Time.”

A common thread, festival leaders say, is that filmmakers want to help sustain this vibrant ecosystem of film culture — which on a normal festival night is seen in the teeming festivalgoers outside the Princess of Wales Theatre in Toronto or heard in the hum of chatter throughout Alice Tully Hall in New York. Typically, Vincente and her fellow co-head Cameron Bailey would be fighting traffic to hop from venue to venue to introduce films. This year, aside from a daily drive-in, they’re recording them.

“The funny thing is, we feel like the festival started last week or the week before,” said Vincente. “We’re prerecording so much.”