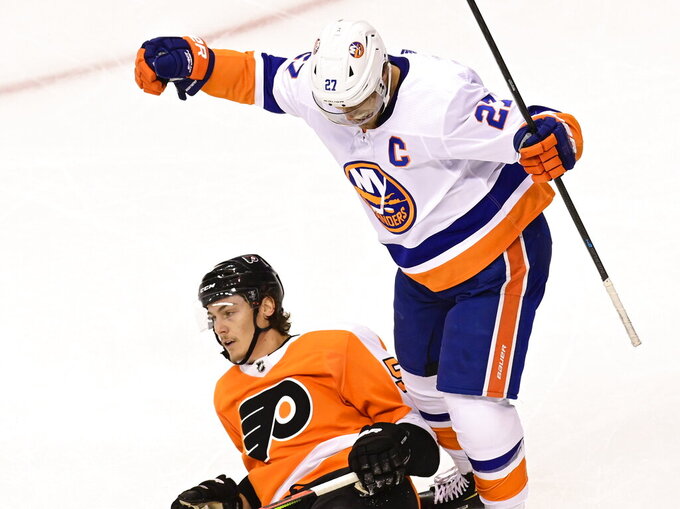 Long after being the hottest team in the NHL and resembling a Stanley Cup contender in February and March, Philadelphia won its first four games when hockey resumed as if it hadn't missed a beat.

The Flyers earned the top seed in the Eastern Conference and made it through a tough first-round opponent in Montreal. Then the power went out of the power play, a goal against in Game 7 sank their morale and they were eliminated in the second round by the New York Islanders, leaving more questions than answers about a season that showed promise months and even weeks ago.

“We were playing great hockey there at the start,” goaltender Carter Hart said. “We came in the bubble hot. Playoff hockey is a different animal. You got to bring it every night. You can’t have off nights. Bounces just didn’t go our way.”

Philadelphia won its first playoff series since 2012 and came back from a 3-1 deficit against New York to force a seventh game. All that despite scoring just four power-play goals in 52 chances in the postseason and going 0 for 13 in the Islanders series.

Center Sean Couturier, who sprained the medial collateral ligament in his right knee in a collision with Mathew Barzal in Game 5, missed Game 6 and played through it in Game 7, said if the Flyers knew what was wrong with the power play, they could've fixed it.

On the surface, the power outage was stunning for a team with Couturier, Claude Giroux, Jakub Voracek, Travis Konecny and Ivan Provorov usually able to fill the net.

“Our power play wasn’t there this series,” Giroux said. “Could have gotten us a couple big goals this series, but power play didn’t get the job done."

Couturier injured the same knee he played on injured in the playoffs two years ago, and it's unclear how many other players weren't fully healthy.

The Flyers did get an emotional boost when Oskar Lindblom returned to the lineup for Game 6, just two months after completing treatments for a rare form of bone cancer, but they weren't able to play long enough for him to help try to end the franchise's title drought that dates to 1975.

This season ended after the Flyers allowed an Islanders goal midway through the first period and could never muster a response. That seemed to trouble coach Alain Vigneault after his team fought so hard to get back in the series.

“After they scored that first goal, we just never had that same bounce or the same pop,” Vigneault said. "We were down, we gave ourselves a chance and on a night we needed to be good, we weren’t good enough.”

Despite not being good enough to reach the Eastern Conference final, the playoff experience should benefit Hart, who showed he could be the goalie the organization has been looking for. While turning 23 in the bubble, Hart put up a 2.23 goals-against average and .926 save percentage in his first NHL playoff action.

But for all that hope about Hart comes questions about what general manager Chuck Fletcher will do to shore up some weaknesses and solve some problems. Forward James van Riemsdyk and defensemen Shayne Gostisbehere, each signed for three more seasons, are trade candidates with younger, cheaper players ready to take their places.

With some but not a lot of changes coming, Vigneault and the players weren't ready to put a happy face on their playoff exit, especially not knowing what the future will bring.

"It’s too early to take any positives out of anything," Couturier said. "Every year is a new year. Doesn’t matter what we did this year. We’re all going to start back to zero, to a scratch record. It’s going to be to do it all over again next year. I don’t know if you can take positives or negatives. Just got to go home, recharge the mind and get ready for next year, I guess."