'Disappointing' week of divorce talks between EU and Britain 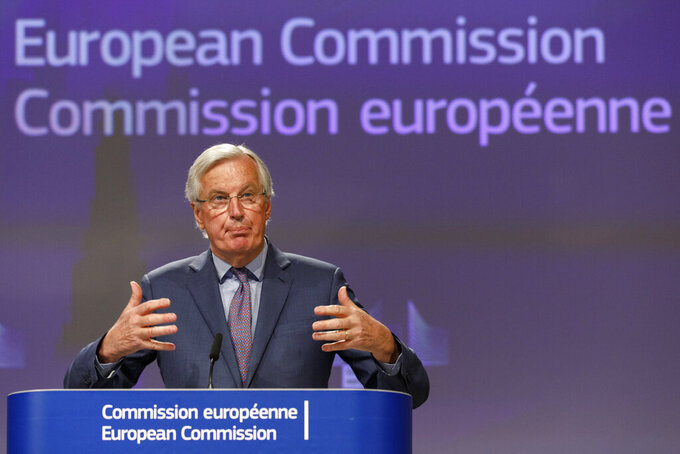 The European Commission's Head of Task Force for Relations with the United Kingdom Michel Barnier gestures as he speaks during a media conference at EU headquarters in Brussels Friday April 24, 2020. (AP Photo/Olivier Matthys)

BRUSSELS (AP) — Key players and the economies on both sides of the Brexit divide have been hammered by the corona crisis. Yet, even this common enemy is not enough to bring the European Union and Britain closer together in talks about their post-Brexit relationship.

After another week of deeply frustrating talks via video linkup, a chaotic and costly breakup at the end of the year was looming ever larger Friday.

Britain left the EU on Jan. 31, but remains closely aligned with the 27-nation bloc until the end of the year. If no deal on their future relationship is agreed by then, a cliff-edge economic departure would loom again for Britain, with uncertainly over customs rules, airline slots, financial regulation and other standards.

EU chief negotiator Michel Barnier, who survived a coronavirus infection earlier this year, said Britain refused to allow any leeway to extend a transition period beyond Dec. 31, despite the massive economic problems that the pandemic has thrown up.

“I am worried,” Barnier said after what he described as another week of “disappointing” video negotiations between both sides. The EU has indicated the 27-nation bloc would be willing to extend the transition by up to two years, certainly considering the economic impact of the ongoing health crisis.

Barnier did take time to directly address Prime Minister Boris Johnson, who spent several days in an intensive care unit and is still recovering from COVID-19. “All the best in your recovery, Prime Minister," he said.

The economic recovery will take longer. According to the International Monetary Fund, the EU's GDP is set to shrink by 7.1 % over the next year, while the UK is to be hit by a slump of 6.5 %. Bad as it already is, a separation with no deal would only compound the malaise.

Ever since the UK voted to leave the EU in June 2016, it has been haggling ever more bitterly with the EU over departure terms. Those simmering sentiments seem to extend now into the negotiations on a new partnership.

In a tight time frame imposed by the UK, both sides now have only months to strike a deal. Similar negotiations between the EU and external trading partners have taken years. And, thanks to the coronavirus, they have do so using video conferencing, which both sides acknowledge is clunky.

“I have to say, objectively, that it is not the same thing," Barnier said.

Division, though, was easy to pick up in Barnier's comments after the week of talks.

“I regret the UK refused to engage seriously on a number of fundamental issues," Barnier said. The UK government said in a statement that “there are significant differences of principle" in several areas.

If Britain is looking for a deal among sovereign equals, Barnier pointed out demographics, the UK's 66 million versus some 450 million from the 27-nation bloc.

If the EU complained about the UK's unwillingness to yield on fisheries in what were once common waters, the British government speaks of “the reality that the UK will have the right to control access to its waters at the end of this year."

Similar disagreements extend to issues ranging from state aid rules to environmental protection and the authority of each other's courts.