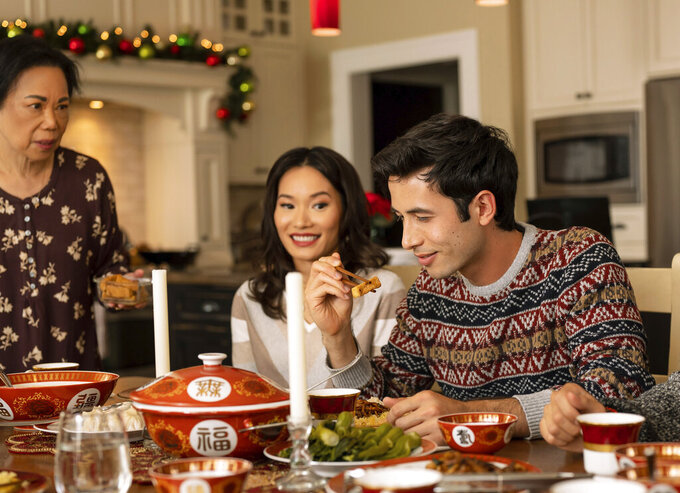 In one scene from the Lifetime TV movie, “A Sugar & Spice Holiday,” a co-worker says to Suzy, an Asian American architect in Los Angeles: “I didn't know if Christmas was a big deal where you're from.”

A lot of viewers of a cozy Christmas film might just shrug off the insinuation that Suzy is somehow not American. But for an Asian audience, that brief exchange is a knowing reminder that microaggressions don't take a holiday. They especially haven't in the wake of the pandemic, which has triggered anti-Asian racism and terms like “Chinese virus” and “kung flu.”

“I think it’s great timing for us for this movie to be coming out now during the pandemic with the perception of the Asian culture and the ‘flu’ and all,” Canadian actor Jacky Lai, who plays Suzy, told The Associated Press. “I really do hope that this (movie) — with our faces — is able to hopefully be welcomed by people into their homes and see us as just your American/Canadian friends.”

“A Sugar & Spice Holiday,” premiering Sunday, may be the first feel-good TV Christmas flick to feature a mostly Asian ensemble. It's one of several projects where cable channels are demonstrating a desire for inclusion this yuletide season. The shift comes a year after the Hallmark Channel dropped an ad that included a same-sex couple. The fallout pointed to an overall diversity problem in the genre with not just the LGBTQ community, but communities of color. Recent months of racial unrest only added to the conversation within the entertainment industry about representation.

Tia Maggini, vice president of Lifetime Original Movies, says it was a coincidence that screenwriter Eirene Donohue, who is Asian American and had worked with the network before, came to them with the story pitch.

“It was exciting to be presented with this particular point of view that has been long overdue for the Christmas movie genre,” Maggini said in a statement. Most important: The movie itself was actually funny and “full of Christmas heart.”

Indeed, the rom-com has all the warm, familiar holiday movie tropes. Suzy returns to the small town where she grew up for Christmas, is persuaded to revive her baking skills for a local gingerbread house competition and is assisted by her former high school crush (Tony Giroux).

Her father is played by veteran actor Tzi Ma. Despite a year filled with high profile film roles in “The Farewell" and “Mulan," Ma didn't hesitate to join a Lifetime movie.

“It was the first time a Chinese American family was featured on a Christmas story,” Ma said in an email. “Lifetime has a tremendous Asian American following. It’s a way to say thank you to them.”

In Hollywood, it can often feel like studios only cast Asians in narratives where there's some kind of hardship or East-meets-West struggle. And with TV holiday movies, they're almost nonexistent. Meanwhile, there are white actors who have made a baker's dozen of them. Like any other group, Giroux says, Asians deserve to see themselves in lighthearted fare regularly.

“I think it’s so important to have all sorts of stories with any culture — for them to have exposure to the stories of struggle but it's such a delight to see something lighter, to see aspects of culture that aren’t surrounded with times of difficulty,” Giroux says.

Giroux, who is Canadian, is also looking forward to queuing up a movie where his grandparents can see themselves.

“I'm really excited for them to see a story that covers part of their story. My grandparents immigrated here from China in the ‘50s,” Giroux says. “That’s why being part of this project is telling a story that I'm really a part of.”

“You hear people say there hasn’t been a movie like this in 25 years. You hear those things. But it’s not until I sat in the theater and watched someone who looked like me on screen who wasn’t a ninja or a nerd but someone just like me. I remember the way it felt,” Lai says. ”I am so excited that there’s another movie like that and hopefully we bring joy and open some minds with this movie and more opportunities."

The movie is lovingly sprinkled with Chinese American nuances on script and screen. These include a photo of Suzy's deceased grandma flanked by incense sticks and the entire family eating with chopsticks. And it is definitely the only Christmas movie to feature both gingerbread and stinky tofu, a beloved Chinese dish known for its pungent smell.

“I love that we were able to kind of include a lot of nice details. ... It’s really a romantic comedy where the characters happen to be Asian American,” says Jennifer Liao, the director. “It’s nice to make an Asian American movie that’s not necessarily completely frontloaded with having to carry the weight of cultural identity issues and things like that.”

“Sugar & Spice” is not the only holiday movie expanding the definition of who can lead these kinds of flicks. A handful of networks, including Lifetime and Hallmark, have a Christmas-themed movie on their slate featuring a same-sex pairing. Tony winner Ali Stroker, who uses a wheelchair, stars in Lifetime's “Christmas Ever After.”

Does Liao feel pressure as “the first” even on such an innocuous project to bring in a sizable audience? “I feel like the pressure is more to deliver something that I and everybody else (who) worked on (this) can be proud of. That was really No. 1,” Liao says.

Lai doesn't see the point of getting caught up in things like ratings.

“I think that it is really, really nice to hear when someone says ‘I got to see someone who looks like me on screen.’ That will never get old," Lai says. “We get more responses like that — for me, the movie did its purpose.”

Terry Tang reported from Phoenix and is a member of The Associated Press’ Race and Ethnicity team. Follow her on Twitter at https://twitter.com/ttangAP