At divided time, Ohio unites behind statue of John Glenn 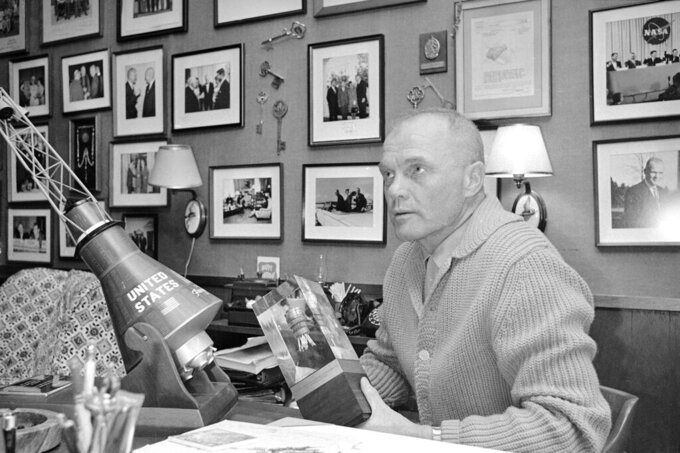 In this Feb. 13, 1967, file photo, astronaut John Glenn sits among mementos of his career at his home in Houston. Fans of the late astronaut are working to bring a statue of his likeness to the Ohio Statehouse to mark major future milestones, such as his birthday and the anniversary of his famous space flight. Thursday marks 58 years since Glenn became the first American to orbit the Earth, making him an instant national hero in 1962.(AP Photo) 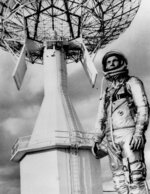 COLUMBUS, Ohio (AP) — Political divisions these days may be deep, but Ohioans never cease to agree on John Glenn.

Both Republicans and Democrats on a state panel heaped praise on the late astronaut and U.S. senator on Thursday, as they voted unanimously to put a 7-foot (2-meter), 600-pound (272-kilogram) bronze statue of him on temporary display at the Ohio Statehouse for the next year.

The period beginning next month will include Glenn's 100th birthday this July, as well as the 60th anniversary of his famous flight as the first American to orbit Earth next February. The vote was delayed about a year due to the coronavirus pandemic.

“We really felt now is the time to seek any way to build unity that we can,” state Rep. Adam Holmes, a Zanesville Republican spearheading the project, said after the vote. “And this was one of them, someone we can all agree on. He was such a role model.”

Holmes represents a rural Ohio district that includes the towns where Glenn, a Democrat, was born and grew up and said he tries to emulate him.

Rules governing permanent placement of a statue on Statehouse grounds say the person depicted must have been dead at least 25 years beforehand. Glenn died in 2016 at age 95.

Holmes and Laura Battocletti, the oversight board's executive director, said the statue could be placed as soon as next week. The sculpture was crafted by Alan Cottrill, who was born and raised in Zanesville, a short drive from New Concord, where Glenn and his late wife, Annie, met and grew up. Annie Glenn died in June of COVID-19. She was 100.

Even as unity around Glenn abounded, signs of the nation’s political tensions were peppered throughout the board’s meeting.

The group discussed whether bulletproof glass should be installed on the Statehouse’s first floor to avoid the type of damage experienced during racial injustice protests this summer, budget increases for added security amid worries following the January insurrection at the U.S. Capitol, and new proposed rules for the removal of historical statues deemed racially or culturally offensive.

State Rep. Erica Crawley, a Columbus Democrat who is Black, lauded Glenn and voted yes on placing his likeness, even as she strongly questioned and voted no on advancing the proposed statue removal rules, which include a minimum five-year waiting period.

Battocletti recommended tweaking Holmes’ proposal to place the Glenn statue outdoors, partly for fear it would be vandalized by demonstrators, who have arisen from both ends of the political spectrum over the past year to stage large Statehouse protests.

“With the unpreditability of our social climate, I can't guarantee the safety of the statue, particularly from graffiti," she said. ”We've seen that for the last 10 months."

Battocletti said placing the statue indoors, near an existing Great Ohioans exhibit, would also allow it to be used for educational purposes and keep from setting a new precedent for temporary placements, Glenn’s being the first.

A resolution urging Congress to award the Glenns a joint Congressional Gold Medal was reintroduced in the Ohio Legislature last week, after lawmakers failed to act on it last session.