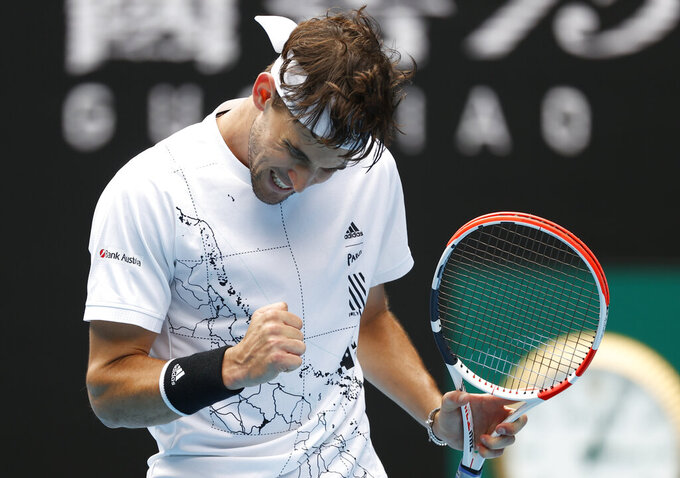 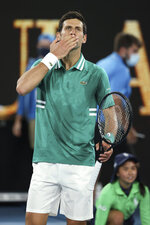 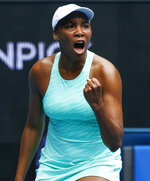 MELBOURNE, Australia (AP) — It's been so long since he had a sizeable crowd to play for, the showman in Novak Djokovic just had to come out.

Top-ranked Djokovic began his Australian Open title defense with a clinical, 6-3, 6-1, 6-2 victory over Jeremy Chardy in the closing act of the day 1 program on Rod Laver Arena.

“Makes my heart full to see the crowd in the stadium again," Djokovic said in post-match interview at the 15,000-seat arena, which was about one-third full. “This is the most people I’ve seen on the tennis court in 12 months. I really ... I really, really appreciate your support in coming out tonight."

He bristled at the suggestion that he'd been frustrated during quarantine, focusing again on the fans.

The total crowd Monday at Melbourne Park was 17,922, including day and night sessions in three zones separated to enhance social-distancing measures. It was well down on the 64,387 fans that crammed onto the grounds on Day 1 of last year's Australian Open, but way more than any other major since then.

After an austere year for tennis during the COVID-19 pandemic, there was a unanimous refrain from players across the day, starting with Naomi Osaka in the opening match on Rod Laver, to Serena and Venus Williams, and to mercurial local favorite Nick Kyrgios, who closed the day on the so-called Peoples' court: Thanks for coming.

While Djokovic spoke of his “love affair" with the main show court, where he has won eight Australian titles, Kyrgios was closing the day's program out on the third arena stadium — where polite applause is always secondary to whoops and whistles — with a 6-4, 6-4, 6-4 win over Frederico Silva.

After his first Grand Slam match in a year, Kyrgios told the crowd “it felt normal, to be honest, you guys were going nuts. It was good to see. Let’s hope we can continue it.”

There's no love lost between Djokovic and Kyrgios, who have been trading verbal barbs for months and added to them this week.

Since losing to Rafael Nadal in the quarterfinals of last year's French Open, Sinner has collected his first two ATP titles — the second of those was the Great Ocean Road Open on Sunday.

The state government is allowing up to 30,000 people per day into Melbourne Park, about 50% of capacity. There were no fans allowed at the U.S. Open, only about 1,000 per day were allowed at Roland Garros and Wimbledon was canceled.

But with the Australian Open starting three weeks later than usual — now it's outside the summer holidays — and some people still nervous about going out in crowds following a harsh Melbourne lockdown last year, it was a predictably cautious start.

That wasn't the case at all for Serena Williams, who arrived ready to race to start her bid for a record-equaling 24th Grand Slam singles title.

“Vintage ’Rena,” she said of her performance. There were no signs of the right shoulder issue that led her to withdraw from the semifinals of a tuneup tournament last week.

Speed was of the essence also for No. 2-ranked Simona Halep and No. 3 Osaka, who each only dropped three games.

Joining them in the second round were No. 7 Aryna Sabalenka, two-time Wimbledon champion Petra Kvitova, French Open winner Iga Swiatek and 2019 U.S. Open champion Bianca Andreescu, returning from 15 months on the sidelines.

Venus Williams, a seven-time major winner, won a Grand Slam match for the first time since 2019.

Playing in her 21st Australian Open, the elder Williams beat Kirsten Flipkens 7-5, 6-2. At 40, Venus is the oldest woman in this year’s draw and just the sixth player in her 40s to compete at the Australian Open.

Williams’ inspiration was clear when she started her match.

Griffith Joyner was a sprinting and fashion icon in the 1980s, setting world records that still stand for the women’s 100- and 200-meter sprints. She died in 1998, the same year Serena Williams contested her first Australian Open.

“Yeah, I was inspired by Flo-Jo, who was a wonderful track athlete, amazing athlete when I was growing up,” Williams said. “Well, watching her fashion, just always changing, her outfits were always amazing.

“This year we thought of what can we do to keep elevating the Serena Williams on the court.”