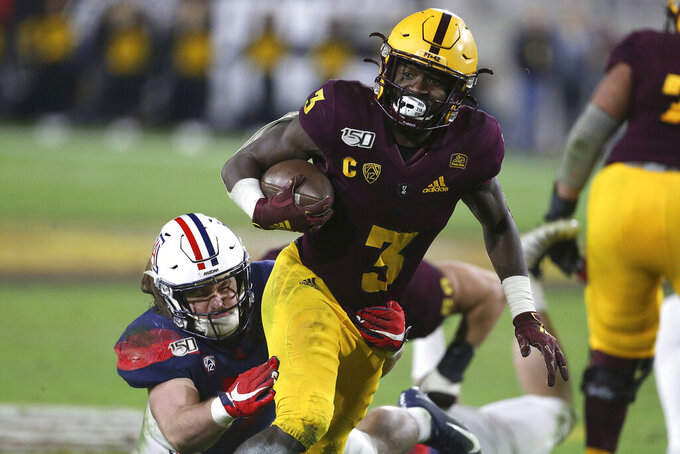 FILE - In this Nov. 30, 2019, file photo, Arizona State's Eno Benjamin (3) slips the tackle of Arizona's Colin Schooler (7) during the second half of an NCAA college football game in Tempe, Ariz. Five NFL prospects, including Benjamin, are being featured in a Panini docu-series that chronicles their paths to the NFL. With the coronavirus outbreak, teams were not allowed to visit with prospects. These five players get to tell their stories, giving them an advantage over the rest of the field. (AP Photo/Darryl Webb, File)

NFL prospects hoping to dazzle scouts at pro timing days or win over general managers and coaches during team visits in advance of the draft were forced to rely on videoconferencing because of the coronavirus pandemic.

Teams were unable to poke and prod them or perform the usual deep dives into the prospects' backgrounds to help them build their draft boards.

So teams are relying more on college game tape than ever before.

A fortunate few, however, are sharing their stories through slick social media presentations thanks to a connection with Panini America, the trading card partner of the NFL, NFLPA and Collegiate.

What began as a documentary series following five NFL draft hopefuls through their journey from college to the pros took on greater importance when the COVID-19 outbreak torpedoed the usual evaluations that take place between the scouting combine in late February and the NFL draft later this week.

“Being able to have them get my name out there and share my story — knowing not many have the same opportunity — is a great feeling,” said Arizona State running back Eno Benjamin. “I’m grateful for that relationship.”

“We’ve had to audible quite a bit,” said Jason Howarth, vice president of marketing for Panini America. He said the original plan was to chronicle the five prospects’ journeys from the combine to draft night and arrival in the NFL, followed by the NFLPA Rookie Premier, the company’s annual photo shoot in May, which also has been canceled.

“But our goal all along was to really tell the stories of five players in a compelling and meaningful way that showed and spotlighted who these players were,” Howarth said.

Each of their first episodes morphed from their combine experience into something much more, Howarth said.

“We chose these five players because of the unique stories they have to tell and how their journey has shaped them,” Howarth said. “While the coronavirus pandemic has now changed that journey and was not part of the initial plan, we know how important it is for these players to share who they are beyond just their game tape and we hope this series helps convey that.”

The “Road to Rated Rookie” documentary series gives a behind-the-scenes look into how NFL hopefuls dealt with the uncertainty caused by the coronavirus outbreak.

“These guys all had plans to work out with guys, prep together like all these other players have done in the past, planned to have a college quarterback throwing them balls to hone in on their routes and they’ve had to audible the whole entire way. And we’ve been there to witness some of it, the training on the fields that they just managed to find to get in the work.

“So, it’s been very fortuitous in that the content that’s coming out now is their only content.”

“Many players could just post videos of themselves working out, but the way we’re doing it here with Panini, the way the edits are in the background, it’s kind of just ‘popping’ a little bit more,” Benjamin said.

Episode 2 was originally going to chronicle the players’ draft experience and the third and final episode would track their adjustment to their new NFL team.

“Our plan was going to be the next morning after the draft, go on a plane with them and be with them when they landed in their NFL city,” Howarth said. “Now, their first meeting with that NFL team after they’re picked is going to be probably a Zoom call, right? Changes the dynamic, changes a bit of the storytelling. So, it’s all very fluid."

“I don’t think anyone was predicting, even at the combine, that Commissioner Roger Goodell would be announcing picks from his basement.”