Documents show US investigation of 2 Kuwaitis in FIFA case 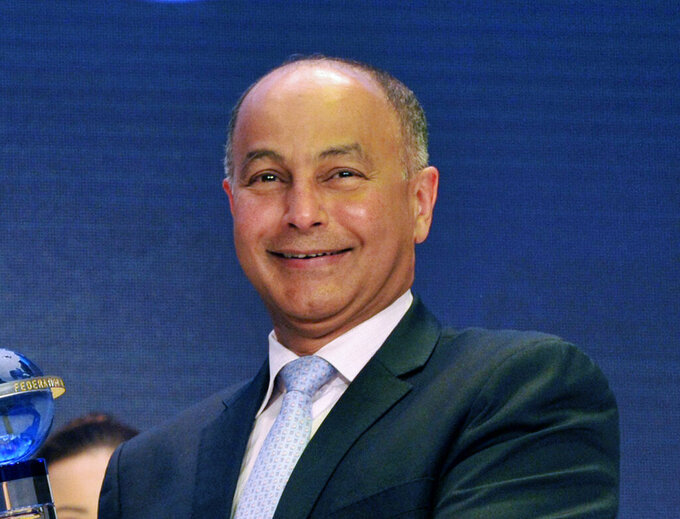 FILE - In this file photo dated Sunday, Jan. 31, 2016, First Vice President of the International Swimming Federation, FINA, Husain Al Musallam, during the FINA World Aquatics Gala in Budapest, Hungary. Documents obtained by The Associated Press show two senior Olympic officials from Kuwait have been targeted by the U.S. Department of Justice for suspected racketeering and bribery related to FIFA and international soccer politics. Sheikh Ahmad Al-Fahad Al-Ahmed Al-Sabah is reputed to be the “kingmaker” of IOC elections. Husain al-Musallam is president of swimming’s international governing body. The documents include details of the DOJ investigation and a formal request to Kuwaiti authorities in 2017 for help to secure evidence. (Attila Kovacs/MTI via AP, File)

GENEVA (AP) — Two senior Olympic officials from Kuwait, one reputed to be the “kingmaker” of IOC elections and another who is president of swimming’s international governing body, have been targeted by the U.S. Department of Justice for suspected racketeering and bribery related to FIFA and international soccer politics, according to documents obtained by The Associated Press.

The U.S. embassy in Kuwait made a formal request to local authorities in 2017 for assistance to secure evidence including records of multiple bank accounts held in the Gulf state, according to one document.

The documents confirm that Sheikh Ahmad is under investigation and provide insight into the U.S. government’s probe of high-level foreign officials as part of the broad FIFA investigation that began more than a decade ago.

The sheikh is an influential powerbroker in Olympic circles who was a key ally behind Thomas Bach’s successful run to the IOC presidency in 2013. The long-time IOC member is president of the group of national Olympic bodies known as ANOC and a former member of the FIFA executive committee.

“I asked Kuwait to give them everything,” Sheikh Ahmad told the AP this week about the American request. “I have nothing to hide.”

Al-Musallam, a close ally of the sheikh, took over as president of swimming governing body FINA in June and for the last 16 years has been the Olympic Council of Asia’s director general. Sheikh Ahmad has been president of the OCA since 1991.

At the Tokyo Olympics in July, al-Musallam told the AP he had done nothing wrong and was never questioned about the case by American authorities.

FINA did not immediately comment on the case on Thursday while the IOC declined to do so.

Sheikh Ahmad is also currently standing trial in Geneva on an unconnected matter in a dispute between political factions in Kuwait’s royal family. He has denied wrongdoing and said that case is politically motivated.

The 58-year-old sheikh has been seen as a potential future Emir of the oil-rich kingdom, a status that fueled rivalry.

After the indictment in Geneva was revealed three years ago, Sheikh Ahmad agreed to step aside temporarily from the IOC and presidency of ANOC. He continues to lead the OCA and have influence in Asian soccer elections.

The DOJ document seen by the AP details payments totaling about $1 million from Kuwait — wired from personal accounts held by three of the men and Olympic organizations run by the sheikh — to a FIFA official from Guam. That man, U.S. citizen Richard Lai, admitted to financial conspiracy charges in federal court in April 2017 and agreed to pay $1.1 million in penalties. He has yet to be sentenced.

The sheikh and al-Musallam could be identified as co-conspirators in 2017 from federal court documents in that case. Lai admitted to taking bribes from a Kuwaiti faction that wanted to buy influence and votes in Asian and world soccer.

Since 2013, Sheikh Ahmad and his allies have run the Asian Football Confederation. They control most of the soccer body’s 46 votes at FIFA’s annual meeting of 211 members, and can place people on FIFA committees.

Sheikh Ahmad and al-Musallam have denied wrongdoing in the FIFA case, were never indicted and continued their Olympic work despite being implicated in paying bribes. U.S. authorities made no further comment and it has been unclear how active the investigation was.

“As a matter of policy, the Justice Department does not publicly comment on mutual legal assistance requests to and from our partner countries, including confirming or denying the very existence of such requests,” Justice Department spokesperson Nicole Navas Oxman said in a statement to the AP.

Last week, the DOJ restated its commitment to its wider FIFA investigation when it announced paying tens of millions of dollars in money forfeited and seized from corrupt soccer officials back into FIFA’s control as restitution.

“Our work isn’t finished,” Michael J. Driscoll of the FBI’s New York Field Office said in a statement last week, “and our promise to those who love the game — we won’t give up until everyone sees justice for what they’ve done.”

The documents seen by the AP show that within weeks of Lai’s guilty pleas, the DOJ drafted a formal approach to the “Central Authority of the State of Kuwait” to help get potential evidence.

It stated federal prosecutors in New York are investigating if the named men and others “have violated United States criminal laws by making, accepting, and/or facilitating bribes, kickbacks and other types of illicit payments to (FIFA officials) and laundering such bribe payments and proceeds, conduct which also constitutes racketeering.”

It reveals that an ANOC account, at the Alahli Bank, was used to wire two payments of $50,000 each in 2015. Lai had said in court he received money from personal accounts and the OCA.

The DOJ document was to be presented to Kuwaiti authorities by the U.S. Embassy in the country.

The formal request for legal assistance from the embassy, dated Sept. 27, 2017, and also seen by the AP, was to be sent to Kuwait’s ministry of foreign affairs for passing on to the attorney general.

American prosecutors told their Kuwaiti counterparts they wanted to establish if the suspects made other payments to Lai, or if their accounts were used to wire possible bribe payments to other soccer officials.

They requested documents dating from 2009, including details of accounts, safe deposit boxes, wire transfers, due diligence reports, currency transactions, emails and internal bank communications “concerning media reports discussing any of the above accountholders.”

American prosecutors said copies should be authenticated by “appropriate custodians” from the banks knowing that false statements “would subject the maker to criminal penalties under the laws of Kuwait.”

The two other men identified in the documents, Kardany and Charim, who are both Iranian, were assistants to al-Musallam at the Kuwait-based Olympic Council of Asia.

Kardany later joined the governing body of Asian soccer, the Malaysia-based AFC, where he is now deputy general secretary.