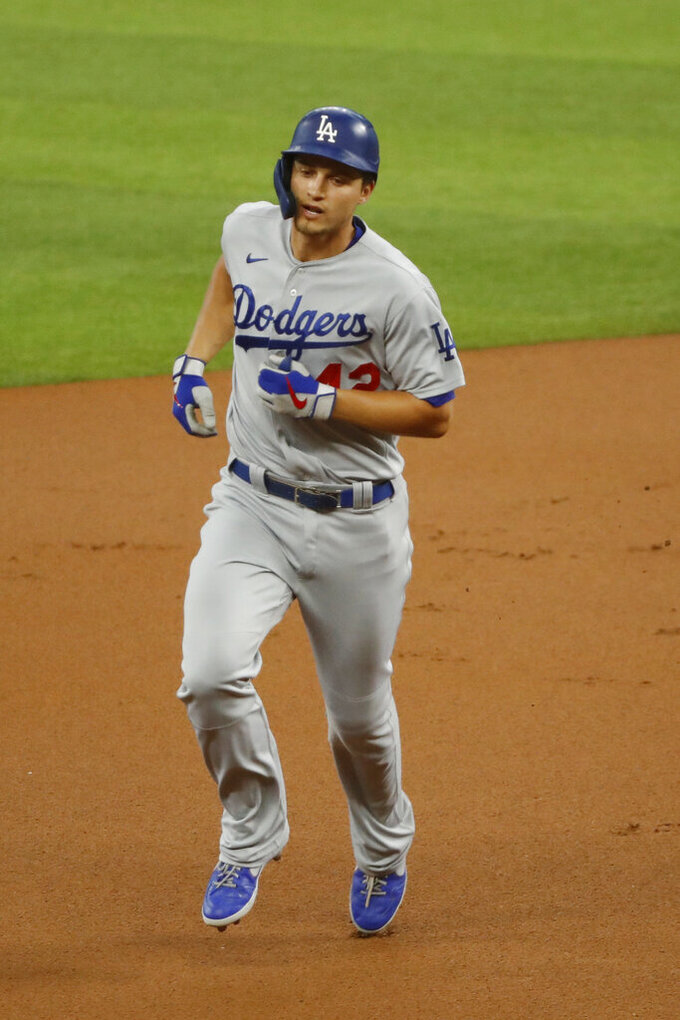 Los Angeles Dodgers' Corey Seager rounds the bases after a home run in the first inning of a baseball game against the Texas Rangers in Arlington, Texas, Sunday, Aug. 30, 2020. (AP Photo/Roger Steinman) 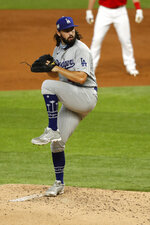 ARLINGTON, Texas (AP) — Cody Bellinger and the Los Angeles Dodgers set the National League record for home runs in a month. And they still haven't lost a series all season.

Bellinger's two-run homer gave the Dodgers 57 long balls in August after solo shots from Corey Seager and Will Smith, and LA beat the Texas Rangers 7-2 on Sunday.

The 10th home run of the season for Bellinger topped Atlanta's previous mark of 56 home runs in June 2019. The record came in the third inning of LA's final game of August. The club is off Monday.

Manager Dave Roberts didn't seem interested in an asterisk for the record because the NL is using the designated hitter for the first time in the pandemic-shortened season.

“It’s still a record,” Roberts said. “It’s just a byproduct of swinging at good pitches. I don’t know how well the ball is carrying compared to the last couple of years, but it’s amazing to see the talent that we have in our lineup.”

The Dodgers, who have the best record in the majors, bounced back from a series-opening loss to the fading Rangers with consecutive wins. They now have 12 series without a loss to start the season — tied for the fifth-best season-opening run since 1969.

The 1990 Cincinnati Reds went unbeaten in 17 series before losing one. LA is among three teams next at 14, a mark the Dodgers reached in 1977 to match the 1970 Minnesota Twins. Baltimore made it a trio in 1997.

“Regardless of if you lose the first game of a series, we're trying to win every game and there’s no panic in the clubhouse,” Roberts said. “So the goal is to keep winning series, and do that indefinitely.”

LA starter Tony Gonsolin surrendered his first run after beginning the season with 16 2/3 scoreless innings, but the right-hander still doesn't have a win to show for his 0.51 ERA. Gonsolin came out after three innings, the third time in four starts he was pulled without going five.

Leody Taveras scored on a wild pitch to end the scoreless streak with no outs in the third. Gonsolin reloaded the bases with his third walk before getting three consecutive outs, capping his outing with his fifth strikeout on the 11th pitch to Todd Frazier.

“I probably felt the best out of the whole outing in that one at-bat,” Gonsolin said. “Just kind of battling up there, and kind of the adrenaline and the compete kind of took over.”

Seager's ninth homer went into the Texas bullpen in right-center in the first, while Smith's fourth was a 439-foot shot into the second deck in left field off Kyle Gibson (1-4) in the second. The Texas right-hander gave up five runs in five innings with eight strikeouts.

“It has been a little frustrating because I just looked, my last three starts I have given up six homers, I’ve gotten 19 ground balls, six flyball outs and six homers,” Gibson said. “Half of your flyballs are not supposed to leave the yard.”

Seager and Mookie Betts had two hits and two RBIs each, while Smith scored three runs.

Rookie Víctor González was eligible for his third win in as many appearances after the left-hander replaced Gonsolin and gave up a run in 1 1/3 innings. But the victory was awarded to Scott Alexander (2-0) after the lefty retired all four batters he faced. Alexander and Dennis Santana combined to finish the game with 3 1/3 hitless innings.

The Rangers and Astros are finally supposed to get their Texas rivalry started Tuesday in Houston. The lingering issue, though, is the postponement of Sunday's game between visiting Oakland and the Astros.

The A's had a person in their traveling party test positive for COVID-19, forcing the postponement. Oakland went to Houston after playing a four-game series at the Rangers.

“It’s definitely on our radar,” Texas manager Chris Woodward said. “The good thing is we have an off day and we weren't going to leave until tomorrow anyway. So we have a little bit of time to sort through it and talk with MLB and see what the latest is.”

Dodgers: Roberts said the best-case scenario for Justin Turner's return from a left hamstring strain would be Tuesday as the DH. The Dodgers are off Monday. Turner exited Friday's game with the injury.

Rangers: Woodward said SS Elvis Andrus (lower back strain) would probably be activated from the injured list after Sunday's game. ... 2B Rougned Odor missed his sixth straight game with a right eye infection.

Dodgers: LHP Alex Young (1-1, 4.70) ERA is scheduled for Tuesday's opener of a three-game series against Arizona at home.

Rangers: RHP Jordan Lyles (1-3, 9.25) is set for Tuesday's opener of the three-game series at Houston.

This story has been corrected to show the Dodgers are unbeaten in 12 series to start the season, but they have not won all 12.