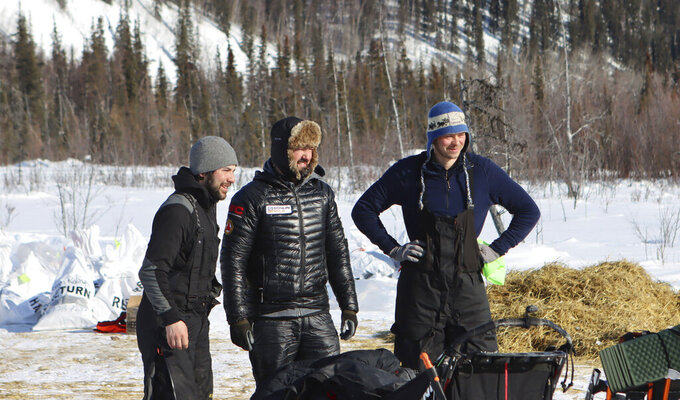 Past Iditarod champions Joar Ulsom, right, and Pete Kaiser pose for a photo with Richie Diehl, left, in the Ophir, Alaska, during the Iditarod Trail Sled Dog Race on Friday, March 12, 2021. The three are close friends and have been traveling close together for sections of the race. (Zachariah Hughes/Anchorage Daily News via AP, Pool)

ANCHORAGE, Alaska (AP) — One of four former champions in this year’s Iditarod quit the race Saturday, saying it was in the best interest of his dog team which had picked up an illness.

Pete Kaiser, who in 2019 became the fifth Alaska Native and first Yupik musher to win the Iditarod Trail Sled Dog Race, scratched at the McGrath checkpoint. He had 10 dogs in harness after starting the race with 14 on his team.

Kaiser’s dogs picked up a bug earlier in the race, and by the time they reached McGrath, they were not doing well. The Bethel musher said he could have completed the race, but didn’t consider his team to be competitive, the Anchorage Daily News reported.

The coronavirus pandemic didn’t stop the world’s most famous sled dog dog race from starting March 7 with 46 mushers. During the race, mushers have bypassed most rural Alaska villages that normally serve as checkpoints as a safety precaution, leaving the competitors to sleep in tent camps outside towns or under the stars in temperatures that have reached minus 55 degrees (minus 48 C).

Since then, seven have scratched including, including fan favorite Aliy Zirkle, who was injured in a fall. Another musher, Gunnar Johnson, was withdrawn after he tested for positive for COVID-19.

That leaves 38 teams on the trail. Aaron Burmeister, a native of Nome, who works in the construction field, was the first musher to leave the checkpoint at Nikolai, about 247 miles (398 kilometers) from the finish.

The winner is expected to arrive in Willow early this week. Fans are being encouraged not to attend and instead watch the event on live statewide television.