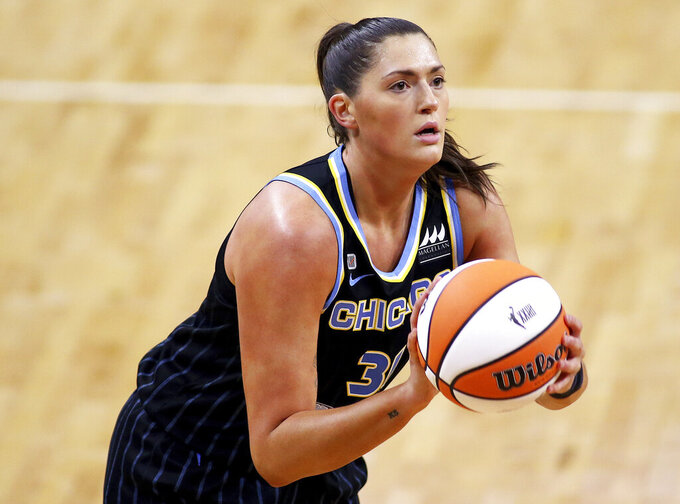 FILE - In this May 15, 2021, file photo, Chicago Sky center Stefanie Dolson controls the ball during a WNBA basketball game against the Connecticut Mystics in Washington. Sky star Dolson is checking in periodically from the Olympics. She is part of the U.S. 3x3 team that will take part in the inaugural competition in that event at the Tokyo Games. (AP Photo/Daniel Kucin Jr.)

LAS VEGAS (AP) — Wow, it’s been an awesome week of training in Las Vegas getting ready for my first Olympics.

USA Basketball has done a great job of making practices feel like a 3-on-3 tournament. There’s music playing, which is just like the real thing. It’s definitely fun playing those tournament games and having a really fun atmosphere.

It was really cool that when we got there, they had giant banners with our faces on them. It was a special moment for me. At times it’s hard to believe that this is really happening, and I’m going to the Olympics!

Obviously, the coronavirus is still a big deal, and we’re taking every precaution we can. With only four of us on the team, if one of us tests positive that would be really bad. So, we don’t really spend much time together off the court, basically just going back to our hotel rooms after practice.

We are still testing every day and know how important this is. Even when we do get together for breakfast and lunch as a team we sit at a big table socially distanced.

Dinners have been a lot of Uber eats and getting food to go and eating in our rooms.

There’s been a lot of time in my room watching TV, and I’m always open for new shows if anyone has suggestions.

Obviously been watching a lot of basketball with the NBA Finals and all the USA men’s and women’s games have been televised so I can watch them. Big shoutout to my Chicago Sky teammate Allie Quigley for winning the 3-point title again! I was yelling at the TV from my room.

Also, way to go Jonquel for representing the bigs!

Besides watching TV, I’ve also had some time to reflect on the upcoming Tokyo Games. It’s really special to be part of the first 3-on-3 event in Olympic history. It’s humbling, exciting, nerve-wracking all wrapped up in one.

It’s exciting to say that I am going to be part of history.

I can’t wait to get to Japan and experience it. I’ll be documenting the entire thing.

Now onto the long plane ride. I will talk to you soon from Tokyo.

Chicago Sky star Stefanie Dolson is checking in periodically from the Olympics. She's part of the U.S. 3-on-3 team that will take part in the inaugural competition in that event at the Tokyo Games.