Donations pour in to rebuild Newman's camp for sick kids 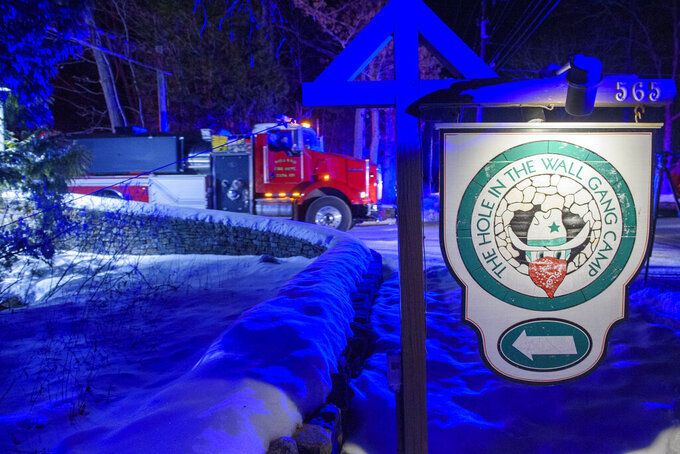 Less than a week after a fire tore through Hole in the Wall Gang camp for seriously ill children in Connecticut, almost $3 million has been raised to help rebuild the facility that was founded by the late actor Paul Newman.

That includes pledges of $1 million from the Newman's Own Foundation and a promise by Travelers and the Travelers Championship PGA golf tournament to match up to $1 million in other donations.

Jimmy Canton, the camp's chief executive officer said Friday that just over $900,000 has come in from other sources, including charitable foundations, individuals including celebrities such as golfer Bubba Watson, and even the families of campers.

“It's just been so inspiring,” Canton said.

Carly Demartino, 16, of Granby has been attending camp since 2016 after she was diagnosed with a cancerous brain tumor. Being able to do things such as scale the camp's climbing tower and zip line to the bottom gave her a feeling of accomplishment and normalcy, she said.

Canton said insurance will cover much of the rebuilding costs, but the plan is to construct a better, much larger and safer single-level complex that is more accessible to children with a wide variety of physical needs.

The camp was built in 1988 to accommodate about 300 children each summer, he said. The charity now serves about 20,000 kids a year on site and through community and hospital-based programing.

Canton said they plan to build the new buildings out of something more durable than wood, will include sprinkler systems and large underground cisterns.

Fire departments used tankers and water from the camp's pond to put out the Feb. 12 blaze, which destroyed buildings housing the camp’s woodshop, arts and crafts, cooking, creative writing program and camp store. The fire remains under investigation, but authorities have said they have not found any evidence of arson.

Camp director Alan Pender was the only person at the camp when the fire broke out, Canton said. He and fire officials were alerted to the blaze by an automated alarm.

Because of COVID-19 and the need for social distancing, plans already had been made to move outdoors or into tents much of the programming that would have taken place inside the buildings that burned, he said.

Canton said they hope to begin construction in September and have it completed in time for the summer of 2022.