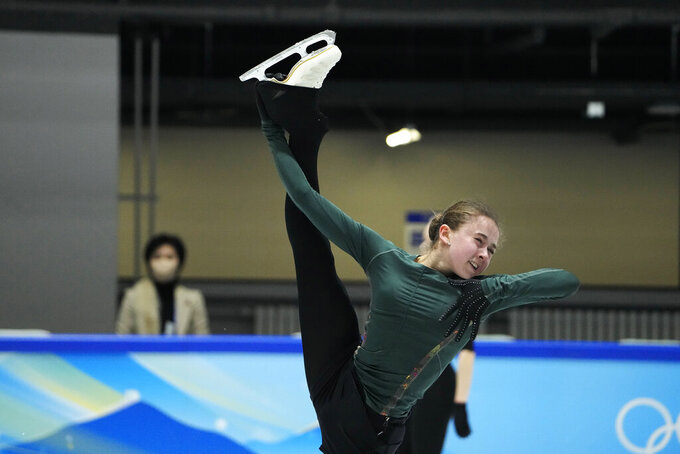 BEIJING (AP) — Russian figure skater Kamila Valieva’s right to compete in the women’s event at the Beijing Olympics will be decided at an urgent hearing at the Court of Arbitration for Sport.

Both the World Anti-Doping Agency and the International Testing Agency — on behalf of the IOC — said Friday they would fight the decision by Russia’s anti-doping agency to allow the 15-year-old Valieva to skate. The Russian agency provisionally banned Valieva on Tuesday because she failed a doping test in December. After an appeal, the agency lifted the ban Wednesday.

Valieva is the heavy favorite in her event, which begins Tuesday. She set world record scores this season and landed the first quad jump by a woman at an Olympics as the Russian athletes competing as ROC, short for Russian Olympic Committee, won the team event. The ROC said it will fight to keep that gold medal, and Valieva has passionate support from the Kremlin.

The ITA confirmed reports that Valieva tested positive for the banned substance trimetazidine at the Russian national championships in St. Petersburg six weeks ago.

The positive test was flagged by a laboratory in Sweden only on Tuesday — the day after Valieva helped the Russians win the team event and just hours before the medal ceremony, which was then postponed. Whether the Russians will lose that gold medal will be decided later.

The Russian anti-doping agency said it was told the delay was caused by the coronavirus, with lab staff in Sweden having been either ill or in isolation. The agency, known as RUSADA, added that it was also investigating Valieva’s entourage “to identify all the circumstances involved in a possible breach of anti-doping rules.”

It also said it was first told of the positive result by lab on Monday, not Tuesday, as reported by the ITA.

The hospital that oversees the Swedish lab said in an emailed statement that “the laboratory is not allowed in any way to comment on a pending case," when asked by The Associated Press to explain the weekslong delay in testing the sample. It is not clear when Russian anti-doping officials sent the sample or when it arrived at the lab.

Valieva was hit with an immediate interim ban from the Beijing Olympics by RUSADA, which oversaw testing at the national championships. On Wednesday, a RUSADA disciplinary panel upheld her appeal and overturned the skater's interim ban.

The rushed hearing at CAS will only consider the question of the provisional ban at these Olympics, said the International Testing Agency, which is prosecuting on behalf of the IOC. The ITA was formed by the IOC in 2018 in the wake of the Russian doping scandal to manage international testing and to design the anti-doping program for the Olympics.

“The IOC will exercise its right to appeal and not to wait for the reasoned decision by RUSADA, because a decision is needed before the next competition the athlete is due to take part in,” the testing agency said.

As a 15-year-old, Valieva has protections in the World Anti-Doping Code. Under the guidelines, she could ultimately receive just a simple reprimand.

When a minor is implicated in doping rules violations, the rules say her entourage, such as coaches and team doctors, must be investigated, too. That isn't typically the case for athletes 18 and over.

“Such cases are not helpful to the Games," IOC spokesman Mark Adams said. “These cases need to be prosecuted properly, taken care of properly and due process needs to be gone through. Otherwise I think the confidence of people would be even less. So I think it’s very important for everybody concerned, not least the 15-year-old athlete that’s concerned, that we have due process, that it’s seen to be done properly and that people can have confidence in the decisions that are taken.”

Valieva will likely be stripped of her Russian national title from December.

The Russian Olympic Committee said it would defend Valieva and fight to keep the team event gold she contributed to. It added that a doping test Valieva took while at the Olympics came back clean. All medalists are tested at the Olympics.

Kremlin spokesman Dmitry Peskov was vocal in calling for support for Valieva.

“We're waiting for the proceedings to end. And infinitely, absolutely infinitely, and completely and in any case we are supporting our Kamila Valieva,” he told reporters Friday.

“And we call on everyone to support her. And we say to Kamila: 'Kamila, do not hide your face, you are a Russian woman, walk proudly everywhere and most of all, compete and win against everyone.”

For the second straight day, Valieva worked out early at the main rink inside Capital Indoor Stadium as if nothing was amiss. She was flanked by Russian teammates Alexandra Trusova and world champion Anna Shcherbakova, both of whom are also coached by Eteri Tutberidze.

During the 45-minute session, Valieva threw down four quad jumps, including one in a potentially high-scoring combination with a triple salchow. She returned later in the day for another practice.

Despite missing on that combo at the Rostelecom Cup in November, when she did a quad-double, Valieva still set a world record there for her free skate. She also set the world record for the short program and total score at the same Grand Prix event in Russia.

A ruling on the Olympic team event likely will take much longer, preventing any medals from being awarded in Beijing. RUSADA will first investigate the full merits of the doping case and give a judgment. That verdict would lead to an appeal and could also end up at CAS.

“The decision on the results of the ROC team in the Team Figure Skating event can be taken by the ISU only after a final decision on the full merits of the case has been taken,” the ITA said.

The latest doping case involving a Russian athlete could have broader implications for the country’s sports program.

Russia is competing in the Beijing Olympics as ROC without its anthem or flag. That’s because of the fallout from years of doping disputes including steroid use and cover-ups at the 2014 Winter Olympics, which Russia hosted.

Another scandal could extend its two-year ban beyond the scheduled December end.

Dasha Litvinova in Moscow and AP Sports Writer Dave Skretta in Beijing contributed to this report.