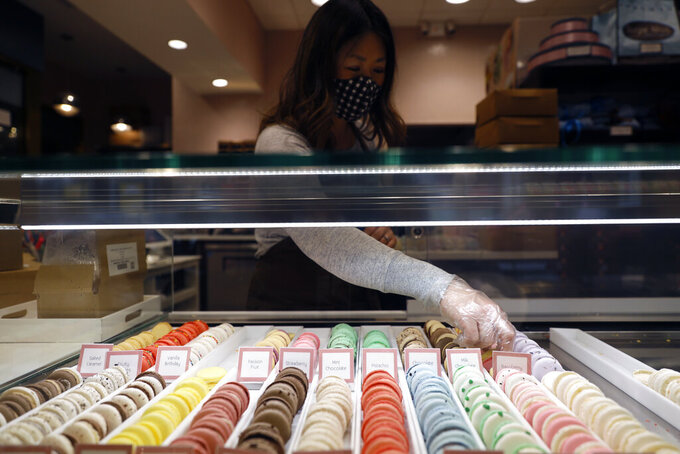 Sugar Bliss Bakery owner Teresa Ging organizes arranges bakery items in her shop in Chicago's famed Loop, Tuesday, May 4, 2021. In many downtown areas where companies closed their offices and commuting ground to a halt, sandwich shops, bakeries and other small businesses are waiting with guarded optimism for their customers to return. (AP Photo/Shafkat Anowar)

NEW YORK (AP) — In many downtown areas where companies closed their offices and commuting ground to a halt, sandwich shops, bakeries and other small businesses are waiting with guarded optimism for their customers to return.

Teresa Ging could count on a steady stream of office workers coming to Sugar Bliss Bakery for muffins and cupcakes before COVID-19. They all but disappeared when the Loop, Chicago’s downtown area, became deserted amid government stay-at-home orders.

In March, a local business group, the Chicago Loop Alliance, found in a survey that a year into the pandemic the number of people coming downtown for work was still below 20% of normal. But Ging is optimistic; some of her regular customers have returned to their office one or two days a week.

“I definitely think the Loop will return back to normal at some point,” she says, although she doesn’t expect that to happen before 2022.

The next few months will be an uneasy time in business districts across the country. With cities reopening and more people vaccinated, office workers are expected to return — especially with big companies like Goldman Sachs and Bank of America notifying staffers that they'll need to return to work. But many businesses are expected to give their employees the flexibility to work from home. And some companies have permanently closed their offices and gone fully remote.

That will keep small business owners waiting and wondering, with varying degrees of optimism. When people began working at home, early-morning and lunchtime crowds turned into a trickle. Many restaurants and stores went out of business, and those that survived relied on government help, concessions from landlords and, when possible, selling online to shore up their revenue.

The downtown Philadelphia bakery owned by Edna Cruz and Michael Caro has just a fraction of its usual customers. Before the pandemic, office workers accounted for about 70% of their business. Now, Cruz worries that Nook Bakery & Coffee Bar’s customers may never return in force.

The couple have kept going thanks to a Paycheck Protection Program loan, leniency from their landlord and sales of their roasted coffee and custom cakes. But they still see a lot of juggling ahead.

“If the rent stays the same and the foot traffic declines, it’s going to be very, very difficult for us,” Cruz says.

But Cruz will likely see more people on the streets — Philadelphia officials announced last week that all restrictions on office capacity would be lifted starting this Friday.

Downtown Atlanta is filled with office towers and businesses typically expect to get a boost from visitors to Mercedes-Benz Stadium, the city’s convention center and tourist attractions. There is just a fraction of that traffic nowadays and city officials have yet to say when Atlanta will fully reopen.

Kwan’s Deli lost about 80% of its business, reduced its hours and laid off its two full-time employees as well as its handful of part-timers. But co-owner Andrew Song is optimistic — even if the number of office workers doesn’t return to pre-pandemic levels, the deli will be able to survive as hotel guests, convention goers and tourists come back.

“As we in our personal lives return to normal, there’s sort of an understanding that the rest of the country will as well,” he said. “There’s definitely some hopefulness.”

Claudio Furgiuele, who owns nearby sandwich shop Reuben’s Deli, is less upbeat. His business has rebounded from the pandemic’s worst days, but he doesn’t expect workers to commute to downtown offices as regularly as they did before. And he needs their business.

“If you’re your anticipation is normalcy in the fall, there’s a good chance you’re not going to be here in the winter,” he said. “Because it’s not business as usual.”

Salons, dry cleaners and other service providers are also waiting to see how many customers return. Beret Loncar’s massage therapy office in midtown Manhattan is serving just half its usual number of clients, and many commute from other parts of the city or the suburbs because they’re not in the office. Her company, Body Mechanics, is actually busier on the weekends than it is during the week.

“Normally they’d come over on lunch hours or after work and that is not the case anymore,” Loncar says. “My sense is they’re coming to us to get out of the house.”

Many of Loncar’s clients are mothers who can’t come back to work until they have childcare options. She’s advertising for new clients for the short term but is optimistic her business will return to normal.

“I think we’re going to be OK. I’m hopeful,” she says. New York Mayor Bill de Blasio has said the city will reopen fully by July 1, but many New Yorkers are expected to continue working from home.

Michael Edwards, who heads the business group Chicago Loop Alliance, is also optimistic. Downtown Chicago pedestrian traffic at its worst was 25% of normal, encompassing only local residents and essential workers. Now, that number is up to 60%.

“It was been trickling upwards,” Edwards says. He’s hoping office building occupancy will reach 50% during the summer, up from the current 20%. While Illinois aims to fully reopen on June 11, Chicago officials have not said when they’ll follow suit.

Although many people would rather work at home, Edwards believes they’ll want to come back when they realize their co-workers are socializing without them.

“There’s the fear of missing out — if enough people are coming back, then they’re missing out on the cocktails after work,” he says.

“It seems like a few more people are coming back slowly,” says Fluellen, who has a cupcake shop bearing his name. Customer traffic at his shop is down about 35% although there aren’t restrictions on offices.

Fluellen knows a complete recovery is a long way off: “We’re around the corner from AT&T headquarters, and we did business every day, all day, with different meetings, group walkovers with their teammates. And we’re not seeing that yet.”

Fluellen closed two other stores during the pandemic, but if business is good enough, he might consider opening another.

“You don’t want to make any plans until you have a good half a year of solid sales, until everything’s back to normal,” he says.

AP Writers Maryclaire Dale in Philadelphia, Kathleen Foody in Chicago and Sudhin Thanawala in Atlanta contributed to this report.