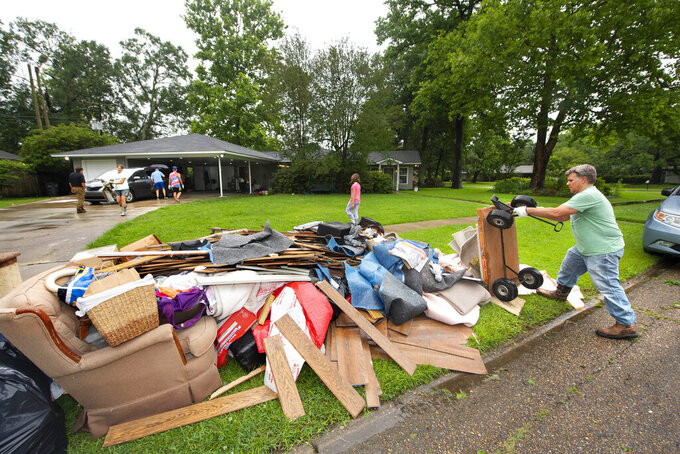 Homeowner Stephen Punkay, right, dumps a cart-load of wet carpet to add to the debris pile, after the Baker Drive home that he and wife Amy share with their six children got at least six inches of water in Monday night's deluge of rain in the Westminster subdivision, as they clean up with the help of family, neighbors and "church family" from Community Bible Church, on Tuesday, May 18, 2021, in Baton Rouge, La. Heavy rains have swept across southern Louisiana, flooding homes, swamping cars and closing a major interstate. (Travis Spradling/The Advocate via AP)

Lake Charles was hammered once again by nature’s fury in a coastal zone still recovering from back-to-back hurricanes last fall and a deep freeze in February.

The National Weather Service said south Lake Charles in western Louisiana saw 12 to 15 inches (30 to 38 centimeters) of rain in a 12-hour period Monday, while elsewhere in the parish as much as 10 inches (25 centimeters) fell.

As the storm moved east, as much as 13 inches (33 centimeters) of rain fell overnight in Louisiana's capital city of Baton Rouge, according to East Baton Rouge Parish Mayor-President Sharon Weston Broome.

By Tuesday the waters had largely receded, but more rain is expected across the region this week.

“It is mind-boggling,” said Lake Charles resident Patrick King. He was at a car rental office Tuesday after his truck was flooded Monday. He still hadn't moved back into his house after it flooded during October's Hurricane Delta but had recently had new furniture delivered to the home. Then it flooded again.

“I picked up everything I could get off the floor and got it elevated," he said.

Lake Charles Mayor Nic Hunter estimated that 400 to 500 structures flooded during Monday’s downpours. Hunter was mayor last year when the city was hit by Hurricane Laura on Aug. 27 and then six weeks later by Delta. Then in February, a deep freeze settled over the region, freezing pipes and causing widespread drinking water problems. Layered on top of all those disasters has been the coronavirus pandemic.

“We are a very resilient people. We are a very strong population. But, you know, eventually you do kind of get to a point where you ask Mother Nature: What more can you do to us?” Hunter said Tuesday.

Some parents in Lake Charles picked up their children from school in kayaks Monday because the roads were impassable, and other residents reported on social media taking winding trips through town to avoid flooded roads.

Lake Charles resident Don Dixon said there was intense rainfall for about 12 hours Monday. He lives on Lake Street but he said it was more like a raging river.

“Water came up about 6 inches from going into my house," he said. “It got pretty close. I was very, very lucky."

The Baton Rouge Fire Department responded to more than 300 calls overnight of people either trapped in cars or in homes that were starting to flood, The Advocate reported.

Gov. John Bel Edwards said at a news conference that there were two weather-related deaths. The body of 33-year-old Justin Blaine Thompson was found in a vehicle submerged in water under a Baton Rouge overpass, the coroner’s office said. Across the Mississippi River near Port Allen, 40-year-old Alvarado Morentes Hermelindo died and another person was missing after their car crashed into a canal Monday evening, Louisiana State Police said.

“Unfortunately, more rain is on the way," Edwards said and pointed out that the ground is already saturated. "While we hope that the worst of this rainfall is behind us, we can’t be sure of that.”

Officials in the Baton Rouge area didn’t yet have estimates of how many homes took on water and were asking people to report their damage. The downpours come five years after similar rains swamped large swaths of the capital region for days. Broome acknowledged the “heightened sense of anxiety” residents were feeling.

“Our community has had more than our fair share of severe rain events,” she said. But she tried to calm residents: “We are not under the same threat as we were in 2016.”

Schools and universities in the parish were closed Tuesday to try to keep people off roads, and the parish was working to clear streets where flooded vehicles blocked passage.

Between the hurricanes, the freeze and the coronavirus pandemic, Lake Charles has been part of four federally declared disasters over the course of a year, the mayor said. He said he’d talked with federal disaster officials who said they could not think of another city that has been subject to as many federal disasters in a similar time period.

Hunter said the city is still waiting for a supplemental disaster relief package from Washington to help the region recover from Hurricane Laura, whose 150 mph (240 km/h) winds scoured western Louisiana in what state officials said was the most powerful hurricane to ever hit the state.

“The plight of the average homeowner in Lake Charles is unthinkable at this moment. You have people that are possibly ripping out Sheetrock and renovating a home for now the third time," he said. “The financial capability of this of this city, the human capital that we have here, is finite.”

Edwards has requested $3 billion in federal aid to help Louisiana with its ongoing recovery from the 2020 hurricanes.

This story has been corrected to show that Alvarado Morentes Hermelindo's car crashed near Port Allen, not in Port Allen.