Duke looks for spark against Charlotte after 1-5 start 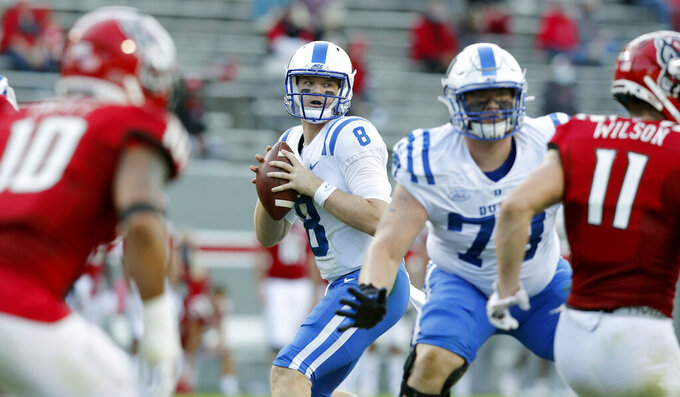 Duke quarterback Chase Brice (8) looks for a receiver during the first half of an NCAA college football game against North Carolina State at Carter-Finley Stadium in Raleigh, N.C., Saturday, Oct. 17, 2020. (Ethan Hyman/The News & Observer via AP)

The turnovers piled up fast for Duke through the first six weeks. So did the losses. The Blue Devils are hoping that’s behind them now entering Saturday’s game against Charlotte.

Duke (1-5) emerges from an open week with a national-worst 22 turnovers. Finding ways to avoid those miscues sat atop coach David Cutcliffe’s list of things to focus on – along with finishing drives with touchdowns after reaching the opponent’s 20-yard line – in the extra time following an Oct. 17 loss at North Carolina State.

“Those two things, you take possessions away and then you’re not getting the ball in the end zone in red-zone opportunities, your point production is going to be poor,” Cutcliffe said.

To his point, Duke is in the middle third of the 15-team Atlantic Coast Conference in total offense (401.5 yards) and passing (252.2) but 14th in scoring at 21.3 points. Duke has thrown 12 interceptions and lost 10 fumbles, while scoring touchdowns on just eight of 21 trips into the red zone.

The instate 49ers (2-2) have had their own difficulties through the first month after having two games postponed and another canceled related to coronavirus issues.

The 49ers are coming off a Conference USA home win against UTEP last weekend and have only played twice against ACC teams since moving to the Bowl Subdivision ranks in 2015.

“You can help your brand if you go and you put a good product on the field,” Charlotte coach Will Healy said. “But it’s important for us to continue to make waves in the state. Obviously we’re recruiting the Carolinas extremely hard. … So it’ll be important that we do things that will continue to make sure that people take us seriously.”

The Blue Devils need Clemson graduate transfer Chase Brice to clean up the mistakes that have plagued the quarterback's play so far.

Brice, who has thrown 11 interceptions, said he spent the open week working on footwork and trying to improve his accuracy while maintaining his aggressiveness.

“I think throughout the game, you can kind of get away from those little things and those little details and they’ll start adding up,” Brice said.

Charlotte has lost both of its games against ACC teams and all five against teams in the five power conferences overall. The two ACC losses came against Louisville in 2016 and Clemson in 2019 since moving to the Bowl Subdivision level in 2015.

The 49ers were scheduled to play another instate ACC team, North Carolina on Sept. 19, but that game was canceled due to coronavirus issues within Charlotte’s offensive line.

Charlotte’s offense has avoided turnovers for the past two games and put up solid offensive totals each time.

The 49ers finished with 599 yards in a 49-21 win against North Texas on Oct. 10, which included Aaron McAllister amassing 214 yards of total offense with two touchdowns. Charlotte followed with last week’s 38-28 win against UTEP, with McAllister having another two-touchdown performance.

Injuries have hit hard for Duke at the most important position on the offensive line.

Duke lost starting center Jack Wohlabaugh to a preseason knee injury. Then the Blue Devils lost Will Taylor, who started the first six games to his own knee injury suffered against N.C. State.

That elevated true freshman Graham Barton, both to finish the game against the Wolfpack and now atop the depth chart for Saturday.

“Graham never dreamed he would be starting at center for Duke,” Cutcliffe said. “He probably dreamed he was going to start at tackle one day. But here he is, and he will be our starting center.”

The game is the second of four straight against instate opponents for Duke.

After losing to N.C. State in the first meeting between the programs since 2013, the Blue Devils host No. 15 North Carolina on Nov. 7 then host Wake Forest on Nov. 21.