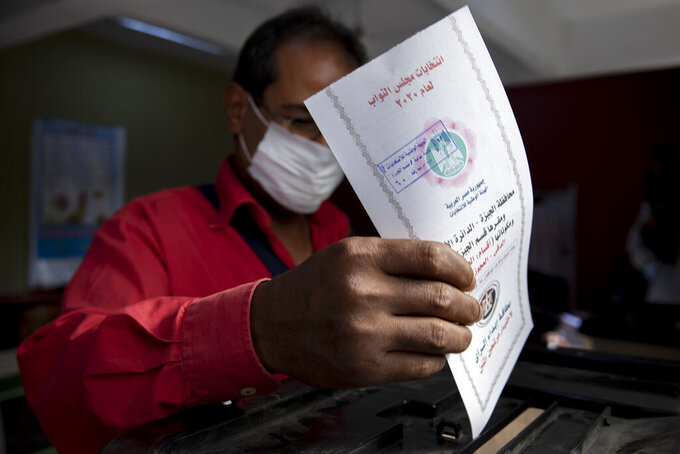 A man casts her ballot on the first day of the parliamentary election inside a polling station in Giza, Egypt, Saturday, Oct. 24, 2020. Egyptians began voting Saturday in the first stage of a parliamentary election, a vote that is highly likely to produce a toothless House of Representatives packed with supporters of President Abdel-Fattah el-Sissi. (AP Photo/Nariman El-Mofty)

CAIRO (AP) — Egyptians cast ballots Saturday in the first stage of the country's parliamentary election, a vote which is highly likely to produce a toothless lower chamber packed with supporters of President Abdel-Fattah el-Sissi.

The election took place place as the Arab world’s most populous country faces a slight increase in coronavirus cases, with authorities warning that a second wave of the pandemic lies ahead.

Like the Senate election in August, Egyptian election authorities said face masks would be handed out to voters for free and polling stations were disinfected.

Prime Minister Mustafa Madbouly urged Egyptians to take part in the vote that he described as having a “democratic atmosphere,” as he cast his own ballot early in the morning in a Giza suburb.

Since coming to power in 2014, el-Sissi has presided over a rolling crackdown on dissent that has discouraged public criticism of the government. Security forces detained thousands following small, sporadic street protests against corruption last year.

Most Egyptian media are supportive of el-Sissi and regularly berate critics as traitors or supporters of the Muslim Brotherhood, a banned Islamist group that is officially designated as a terrorist organization.

Egyptian officials push for people to turn out in high numbers for elections. Election authorities have reiterated previous warnings that individuals who boycott voting could be fined up to 500 Egyptian pounds ($32).

Polling stations closed at 9 p.m. local time on Saturday. They are scheduled to reopen Sunday for the second and last day of first-round voting. Some 63 million voters were eligible to vote in the two-stage election, with results announced in early December.

Only 14.23% of voters participated in the Senate election in August. The government restored the upper chamber to the country's constitution following a referendum last year that sought to extend the presidency's powers and term limits.

A total of 568 seats in the lower chamber are up for grabs in this month's parliamentary election, with over 4,000 candidates running as individuals competing for 50% of the seats. Prominent, wealthy government-affiliated power brokers have an advantage.

The other 50% of seats in the House of Representatives are reserved for over 1,100 candidates running on four party lists. El-Sissi will name 28 seats, or 5%, bringing the total number of seats in the lower chamber to 596.

The first stage of voting was scheduled to take place Saturday and Sunday in 14 of Egypt’s 27 provinces, including Giza and the Mediterranean port city of Alexandria. Egyptian expatriates abroad voted earlier this week.

Voting in the country’s 13 other provinces, including the capital Cairo and the two provinces in Sinai Peninsula, will take place on Nov. 7-8. Each stage of the vote will be followed by runoff elections.

The new chamber is expected to hold its inaugural session shortly after final results are announced in December.

In the run up to the election, Cairo and towns across the country were awash with banners advertising candidates, mostly pro-government businessmen and politicians. In Giza, for example, the main front-runners are staunchly pro-government candidates including businessman Mohammed Abu el-Enein.

In Alexandria, lawmaker Haitham el-Hariri, who was one of the few opposition figures in the outgoing parliament, urged his supporters to vote. He said that he faces “a fierce battle” against what he called “candidates of political money,” in an apparent reference to businessmen loyal to the government who are running against him.

In recent years, authorities have ratcheted up their crackdown on dissent, targeting not only Islamist political opponents but also secular pro-democracy activists, journalists and online critics. The tactic has left the president and his supporters with no formal political opposition.

Last year, police arrested eight people, including former lawmaker and Social Democratic party member Zyad el-Elaimy, after they met with political parties and opposition lawmakers to hash out how to run in the 2020 parliamentary elections. The arrested were accused of spreading fake news and conspiring with an outlawed group to commit crimes, a reference to the Muslim Brotherhood.

El-Sissi’s government has also pushed through sweeping reforms and austerity measures to overhaul the country’s battered economy. The reforms, which included floating the currency and slashing key subsidies, won the Egyptian government praise from its key allies abroad and international financial institutions. But the economic overhaul dramatically hiked prices for everything from electricity to drinking water, squeezing the poor and middle class.

Critics say the 596-seat legislature will be like the previous one, which was little more than a rubber stamp for el-Sissi's policies, leaving the general-turned president with almost unchecked power.

The election's outcome is highly unlikely to produce a parliament that can form its own legislative agenda or hold the government accountable, according to Ahmed Abd Rabou, a visiting assistant professor at the Josef Korbel School of International Studies, University of Denver.

“The coming Egyptian House of Representatives will just continue to remain a puppet in the hand of the government,” he said.