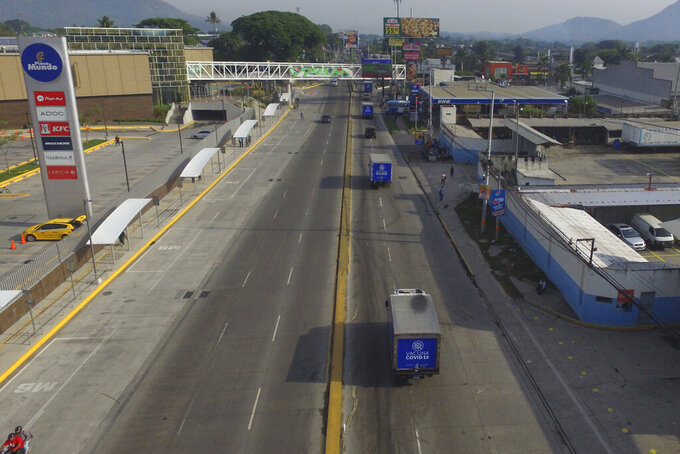 The small-scale diplomacy by President Nayib Bukele raised eyebrows in El Salvador and Honduras, but most people agreed that ultimately it would benefit a population in desperate need of vaccine. El Salvador has been more successful than neighboring Honduras and Guatemala in obtaining vaccine, though all lag in vaccinating their people.

The highly public move also provided a distraction at a time of growing concern among some Salvadorans and international observers over the consolidation of power in El Salvador’s three branches of government by the party led by Bukele, who is highly popular domestically.

On Tuesday, the same day Bukele met with White House Special Envoy Ricardo Zúñiga, who expressed the U.S. government's reservations about developments in El Salvador, the president received the seven Honduran mayors and told them his government would help.

“When I saw your videos, what I saw was a little desperation,” Bukele told them. “I said to the minister and the vaccine people in El Salvador: ‘How can we help?’”

In one video, Amable de Jesús Hernández, mayor of San José Colinas, said, “Our people are dying of COVID, our government doesn’t respond, that’s why we come to you.”

Carlos Galeano, the mayor of Santa María del Real, who also traveled to El Salvador for the vaccines, said Thursday he decided to make his plea because he wanted to help his community and the Honduran government was moving too slowly.

“We didn’t do it to confront the government, nor the political party that is in power,” Galeano said, responding to critics who suggested the mayors were trying to embarrass Honduran President Juan Orlando Hernández. “We aren’t causing any damage to the country. Rather, we want to save lives.”

The towns were to divide the doses according to their respective populations. Galeano said his town was getting 4,000 doses that would be given to senior citizens and teachers.

El Salvador has given at least a single dose to nearly 1 million people, less than a quarter of its target population, but it is far ahead of its two Northern Triangle neighbors in obtaining vaccine. It already received 1.9 million doses and expects more shipments in the coming days.

Honduras, by contrast, had gotten only about 59,000 vaccine doses before Thursday’s donation. In March, Mexican customs agents seized 5,700 doses of purported Sputnik V vaccine from a private plane in the Gulf coast state of Campeche. The Russian Direct Investment Fund identified the doses as fake and a Honduran businessman later said he had been trying to obtain vaccine for his employees and their families.

Ida Berenice Molina, the Honduran official in charge of the country’s vaccination program, told local media that the government had not received any official information about the vaccine donation, including the type and expiration date.

El Salvador’s health secretary, Francisco Alabí, supervised the vaccines’ departure. “We hope that in the coming hours our Central American brothers can begin applying this immunization model we are sharing,” he said.

“To a certain point it is a humanitarian act,” said Mario Gamero, head of the El Salvador Infectology Association. “In the medical field we are more human than political and so we see it from a more human point of view.” He added though that the government can’t “ignore our patients who urgently deserve the vaccine.”

Amílcar Santillana, a cab driver in San Salvador, had a similar view

“You have to help your neighbor, but first you have to vaccinate all Salvadorans,” said Santillana, a 55-year-old awaiting his second dose.

In Honduras, Fernando Anduray, leader of the governing National Party, suggested Bukele's motivation was political, though he wouldn’t complain about more vaccine coming to Honduras.

Bukele “is in his political game there. He’s pressuring for other things and he’s probably using this as a small distraction,” Anduray said on “Frente a Frente,” a Honduran news show. “He’s scoring a political point for his purposes in El Salvador and in front of international political opinion.”

Bukele has offered help to neighbors before. Recently, Costa Rica’s government asked the Central American Integration System, the region’s economic and political organization, for loans of medicine. El Salvador donated 10,000 doses of the powerful painkiller fentanyl, which is used in COVID-19 patients who require intubation.

“You don’t loan help, you give it without conditions,” Bukele said at the time via Twitter. “They would have done the same for us.”

Bukele said Thursday’s vaccine donation would not hinder El Salvador’s vaccination campaign. He said that the government is vaccinating people as quickly as possible and that scheduled vaccine shipments would give the country a margin for some donations.

El Salvador has so far tallied more than 70,000 confirmed coronavirus infections and more than 2,100 deaths from COVID-19.