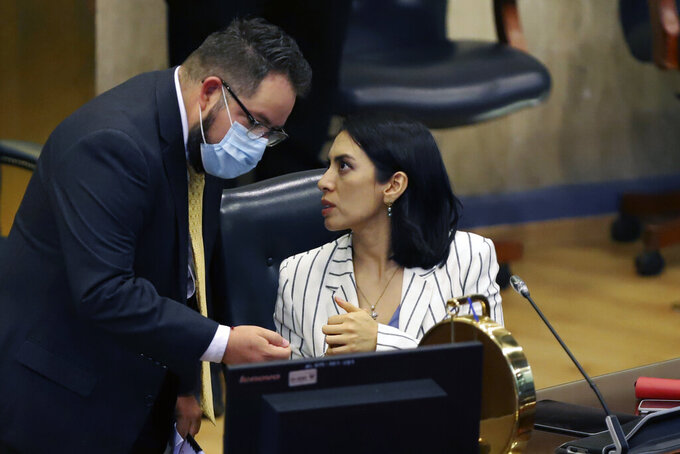 Suecy Callejas, Vice President of the Congress, center, talks to an unidentified man during the first session in San Salvador, El Salvador, Saturday, May 1, 2021. For the first time in three decades the traditional conservative and leftist parties have been sidelined by a resounding electoral defeat, clearing the way for President Nayib Bukele's party to help him advance his agenda. (AP Photo/Salvador Melendez) 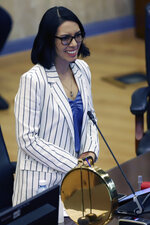 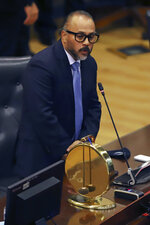 The assembly voted 64 to 19 with one abstention to oust the five magistrates on the chamber, which had angered Bukele by ruling against some of his tougher measures during the pandemic.

Ruling party lawmakers defended the decision, saying the court had put private interests above the health and welfare of the people, while the opposition called it a power grab by a populist president seeking total control.

“This is an outrage against the Republic and democracy,” the conservative opposition National Republican Alliance, or ARENA, said on its Twitter account.

ARENA party president Erick Salguero called the initiative a violation of the constitution and part of Bukele’s “search for complete power.”

Bukele defended the process, saying the Legislative Assembly’s ability to dismiss the court’s judges is “an INCONTROVERTIBLE power clearly expressed in article 186 of the Constitution of the Republic.”

El Salvador’s constitution states that the magistrates of the Supreme Court of Justice may be removed by the Legislative Assembly for specific causes established by law. Both the election and dismissal of its magistrates must have the support of two thirds of the lawmakers.

“We note with concern the proposal by some members of the National Assembly to remove five magistrates of El Salvador’s Constitutional Chamber,” tweeted Julie Chung, acting assistant secretary for the U.S. State Department's Bureau of Western Hemisphere Affairs. “An independent judiciary is the foundation of any democracy; no democracy can live without it.”

José Miguel Vivanco, director of Human Rights Watch’s Americas division, wrote on Twitter that “Bukele is breaking with the rule of law and seeks to concentrate all power in his hands."

The 39-year-old Bukele, a populist who has been criticized for having autocratic tendencies, is by far the most popular politician in Central America.