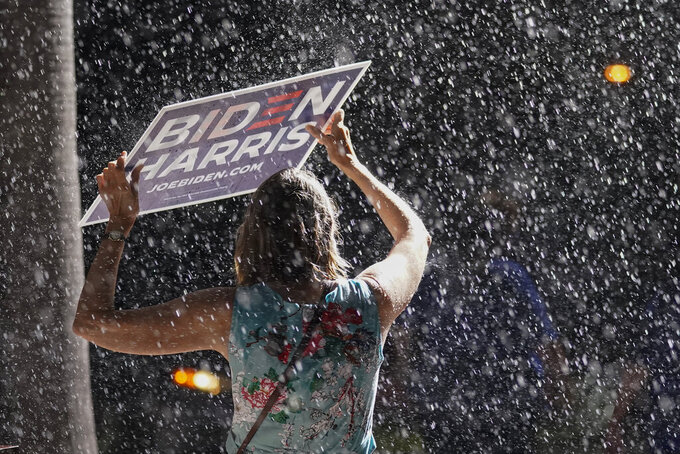 ON THE TRAIL: Joe Biden is in Michigan for two stops. President Donald Trump is in Pennsylvania for four events.

ROAD TO 270: Trump and Biden each has a path to the 270 Electoral College votes needed to win the 2020 election. Biden’s is appreciably wider. The former vice president is competitive in all the battleground states Trump carried in 2016 and has put a handful of traditional Republican states, including Georgia and Arizona, in play. That has Trump scrambling to defend a wide swath of territory and putting his hopes for reelection on two of the most populous swing states, Florida and Pennsylvania. Election Day is Tuesday.

BIDEN, OBAMA HEAD TO MICHIGAN: Biden — with help from his old boss Barack Obama — is focusing on Black voters in Michigan as the Democrat looks to head off a repeat of 2016 nominee Hillary Clinton’s epic collapse in the state. Biden and Obama will hold a pair of drive-in rallies Saturday in Flint and Detroit, predominantly Black cities whose turnout will play a large factor in whether Biden turns the state back to the Democrats’ column.

BIDEN ON THE ISSUES: Biden is promising to take the country on a very different path from what it has seen over the past four years under Trump, on issues ranging from the coronavirus and health care to the environment, education and more. The Democratic presidential nominee is promising to reverse Trump policy moves on things such as withdrawing the U.S. from the Paris climate agreement and weakening protections against environmental pollution.

TRUMP ON THE ISSUES: Expect to see a lot more of the same if there’s a second Trump administration. President Donald Trump has consistently pointed to tax cuts and regulatory relief as key successes of his first four years in office. He has repeatedly pushed for the end of the Obama-era health law, but hasn’t yet delivered a plan to replace it. There’s no indication of any big policy switch if he gets another four years in office.

AP FACT CHECK: An AP Fact Check finds that Trump has persistently warned about a catastrophe in mail-in voting that hasn’t materialized. He also makes a false point that the big rise in virus cases is simply the result of increased testing. His own officials have refuted him on that. Meantime, Biden got it wrong when he said the trade deficit with China is worse now than during the Obama administration. That trade deficit has shrunk under Trump.

AP EXPLAINS: As it has for more than 170 years, The Associated Press will count the nation’s vote in real time on Election Day and report the results of presidential, congressional and state elections on Nov. 3 and beyond. Read more about how that's done.