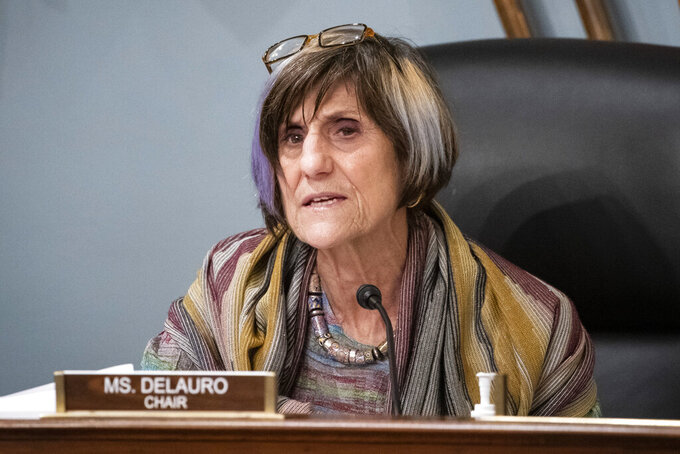 With a record number of new voters on the rolls since the last presidential election, Connecticut officials on Monday urged people planning to cast their ballots in person to have patience but not be scared off by long lines, noting 6-foot social distancing rules could make things look worse than they really are.

“When you get in line, it will move and we will get you in as quickly as possible,” said Sue Larsen, president of the Registrars of Voters Association of Connecticut and a registrar in South Windsor. “It’s just going to look like it’s taking longer because the lines seem to be much longer. So I think time-wise we’ll will be able to handle this as quickly.”

Secretary of the State Denise Merrill, a Democrat, said more than 700,000 new voters have registered in Connecticut since 2016, which she called “an absolute high mark” for the state. However, roughly a quarter of the state's now 2.3 million voters have already cast their ballots by absentee, due to a temporary law change that made COVID-19 a valid excuse, and that could help ease crowds at polling places somewhat.

“This is a big year. We’re going to have a big turnout,” said Merrill, who predicted Connecticut might see 80% voter turnout. The state typically hovers around 75%. “It’s the best thing I’ve seen in the 10 years since I’ve been secretary of the state. I think it’s great. Everyone wants to express themselves.”

Here's a breakdown of what to expect Tuesday in Connecticut:

Much of the interest in this year's election is due to the presidential election, even though former Democratic Vice President Joe Biden is expected to defeat Republican President Donald Trump in Connecticut. But all five of the state's incumbent Democratic members of the U.S. House of Representatives are up for reelection as well as members of the General Assembly.

The congressional races that have received the most attention include those of Rep. Jahana Hayes, who is seeking a second term in the northwestern 5th congressional district, and veteran Rep. Rosa DeLauro in the southern-central 3rd congressional district. For the first time in decades, DeLauro has been running ads to defend her record as she seeks a 16th term in Congress.

DeLauro is facing an aggressive challenge from Republican Margaret Streicker, a real estate executive from Milford who has raised more than $1.6 million, $1 million coming from her own pockets. Hayes, who became the first Black woman elected to Congress from Connecticut in 2018, is facing Republican David X. Sullivan, a former federal prosecutor, who has won the endorsement of police unions throughout the district.

Meanwhile, Democrats have a firm grip on the majority in both chambers of the Connecticut General Assembly, 22-14 in the Senate and 91-60 in the House of Representatives. But Republicans hope to pick up some seats, galvanizing against police reform legislation that was passed during a special session.

All voters are being asked to wear face masks when they go to the polls Tuesday because of the pandemic. However, Merrill said if people refuse, they will still be able to vote. Local election officials are offering options such as separate rooms where maskless voters can privately fill out their ballots or curbside voting, where completed ballots will be placed in privacy folders and brought inside to the tabulating machines.

People without masks will not be allowed inside polling places where others are voting.

Meanwhile, voters who are in line at 8 p.m., when polls close, will still be able to vote and should stay in line, Merrill said. Voters can locate their polling places at myvote.ct.gov/lookup.

Also, eligible voters who are still in line at 8 p.m. for Election Day Registration, a program that allows people to register to vote on Election Day, will be allowed to register and vote just like those waiting in line at the polling places. This is due to a recent change in state law.

Voters who still want to vote by absentee must drop their ballots off by 8 p.m. on Election Day, preferably in the new ballot boxes set up in all 169 towns. While some local election officials have begun processing the large numbers of absentee ballots they've already received — the legislature allowed them to begin opening the outer envelopes on Friday — the counting won't actually begin until Tuesday.

“Basically, we’re starting at 6 a.m. We’re going through until we’re finished,” Larsen said. “Some small towns may be able to be finished on election night. The larger medium-to-large towns and cities are probably going to do some of the counting on Wednesday to ensure that every absentee ballot is counted."

She said if someone does go to the polls and also drops an absentee ballot into the box, their votes will not be counted twice.