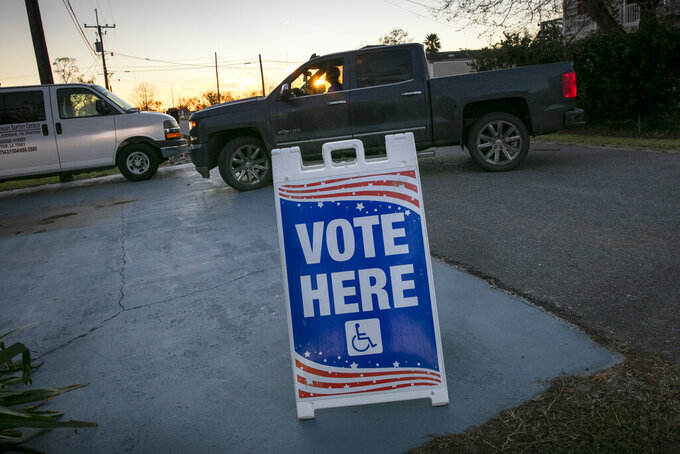 BATON ROUGE, La. (AP) — Voters thought they’d settled Louisiana’s congressional seats last fall, but only a few months later, they’re being asked to return to the polls for a sort of do-over.

A weeklong early voting period opens Saturday in the March 20 special elections to fill two U.S. House positions that opened again shortly after the fall elections wrapped up: the New Orleans-based seat that Democrat Cedric Richmond departed to work as a special adviser to President Joe Biden and the northeast Louisiana-based seat left unfilled when Republican Luke Letlow died of COVID-19 complications before he was sworn into office.

The vacancies have drawn crowded competitions. Fifteen candidates are seeking Richmond's old seat, while Letlow's widow and 11 other contenders are vying for the seat Letlow won in December but never assumed.

Julia Letlow, a university administrator and Republican from the small town of Start in Richland Parish, is considered the frontrunner in the 5th District race, lining up the big-name endorsements quickly, including the backing of the last man to hold the seat, Ralph Abraham. Luke Letlow had been Abraham’s chief of staff and had Abraham’s support for the job once the three-term congressman decided not to run for a new term.

Julia Letlow is the only GOP contender in the race to get the state Republican Party's endorsement. She faces several opponents her husband defeated, including last fall’s third-place finisher, Sandra “Candy” Christophe, a social worker and Democrat from Alexandria.

The sprawling, largely rural district covers all or part of 24 parishes, including the cities of Alexandria and Monroe.

In the southeastern part of the state, several high-profile contenders are jockeying for the New Orleans-based 2nd District seat, a majority-minority district whose footprint extends along the Mississippi River into Baton Rouge.

They include two Democratic state senators from New Orleans, Troy Carter and Karen Carter Peterson; and Gary Chambers Jr., a Baton Rouge Democrat, community activist and local publisher who gained prominence during protests of the 2016 shooting death of Alton Sterling by local police. Also in the field is Desiree Ontiveros, a New Orleans Democrat who owns a balloon and party decor company.

The Republican Party-backed candidate is Claston Bernard, a Jamaican-born decathlete who competed in the Olympics and lives in the Baton Rouge suburbs.

Also on the ballot is a special election for a seat on the state Board of Elementary and Secondary Education representing northwestern Louisiana. That race has five candidates, including a former state senator and the wife of a current state House member.

Voters wishing to cast their ballots ahead of Election Day for those congressional jobs, the state education board seat and other municipal elections can do so Saturday through March 13 from 8:30 a.m. to 6 p.m., except Sunday, at early voting locations around the state. Eleven of Louisiana's 64 parishes don't have anything on the March ballot, according to the secretary of state's office.

In any race where no candidate tops 50% of the vote, the leading two vote-getters will face each other in an April 24 runoff.