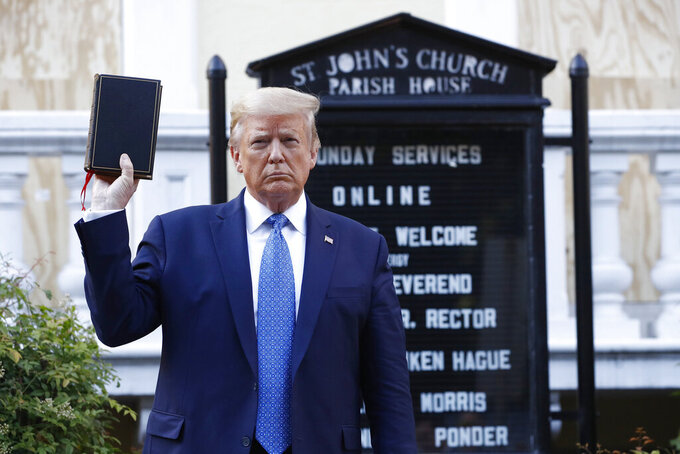 President Donald Trump holds a Bible as he visits outside St. John's Church across Lafayette Park from the White House Monday, June 1, 2020, in Washington. Park of the church was set on fire during protests on Sunday night. (AP Photo/Patrick Semansky)

WASHINGTON (AP) — President Donald Trump toured a Catholic shrine on Tuesday in his second straight religious-themed appearance as the nation grappled with widespread unrest over the death of George Floyd in Minneapolis.

Critics said the president was misusing religious symbols for partisan purposes. The White House said Trump and first lady Melania Trump were observing a “moment of remembrance," laying a wreath in a quiet visit to the Saint John Paul II National Shrine.

The visit came a day after Trump declared himself to be the “president of law and order” and then walked to St. John’s Episcopal Church across from the White House after Lafayette Park was forcibly cleared of protesters. He held up a Bible for photos in front of the church, known as “The Church of the Presidents," which had been damaged by fire during weekend protests.

On Tuesday's drive to the shrine, Trump’s motorcade sped past National Guard members deployed around the World War II Memorial. Some onlookers along the route booed, held “Black lives matter” signs or made obscene gestures as the convoy rolled past.

Back at the White House, Trump signed an executive order to advance international religious freedom during a private Oval Office event with the first lady, Vice President Mike Pence and others, according to senior adviser Kellyanne Conway.

Conway defended Trump amid continued criticism of the St. John's visit, telling Fox News Channel that he held up a Bible outside the church as a “symbol” to those who set it afire.

On Monday evening, Trump had appeared in the White House Rose Garden and threatened to deploy active duty military across the country to quell sometimes-violent unrest in the wake of the death of Floyd.

Trump made his declaration to the sound of tear gas clearing largely peaceful protesters from Lafayette Park. It created a split screen for the ages, with Trump's critics saying the president was deepening divisions at a time when leadership was crucial to help unify a fractured country.

Washington Archbishop Wilton D. Gregory said he was “baffled” by Trump's visit to the shrine and called it “reprehensible that any Catholic facility would allow itself to be so egregiously misused and manipulated in a fashion that violates our religious principles, which call us to defend the rights of all people even those with whom we might disagree.”

Gregory said the late pope was an “ardent defender” of human rights.

“He certainly would not condone the use of tear gas and other deterrents to silence, scatter or intimidate them for a photo opportunity in front of a place of worship,” Gregory said in a statement.

The president’s forceful turn to a partisan posture was reminiscent of the us-vs.-them rhetoric he has often used when under pressure, including in the face of the coronavirus pandemic. He has responded to the violence with a string of polarizing tweets, one starkly laying out the political stakes by underscoring the approach of Election Day.

Trump vowed to deploy the U.S. military to America’s own cities to quell a rise of violent protests, including ransacking stores and burning police cars. He offered little recognition of the anger coursing through the country as he demanded a harsher crackdown on the mayhem that has erupted following the death of Floyd.

Floyd died after a white Minneapolis police officer pinned him down and pressed Floyd's neck with his knee as the man pleaded that he couldn’t breathe. Violent demonstrations have raged in scores of American cities, marking a level of unrest unseen for decades.

The political ground beneath Trump has greatly shifted in the spring of this election year. He was supposed to be running on a strong economy, but now he’s facing a pandemic, an economic collapse and civil unrest not seen since the 1960s.

Indeed, some around the president likened the moment to 1968, when Republican Richard Nixon ran as the law-and-order candidate after a summer of riots and captured the White House. But Trump is the incumbent who risks being held responsible for the violence, despite his efforts to portray himself as a political outsider.

Joe Biden, the likely Democratic presidential nominee, commented Tuesday in Philadelphia on Trump's posing with a Bible. “I just wish he opened it once in a while.," Biden said.

House Speaker Nancy Pelosi said at the Capitol, “We would hope that the president of the United States would follow the lead of so many other presidents before him and be the healer in chief, and not a fanner of the flame." She also quoted verses from the Bible.

“The president just used a Bible and one of the churches of my diocese as a backdrop for a message antithetical to the teachings of Jesus and everything that our church stands for," she said.

The church stop and Rose Garden speech followed a video teleconference Trump held on Monday morning with governors, during which he derided them as ineffective in dealing with protests in their cities.

“You have to dominate” and “if you don’t dominate you’re wasting your time,” Trump said, demanding the protests be swiftly crushed, even as some warned that such an aggressive law enforcement response could lead to an escalation of violence.

He urged governors to make more use of the National Guard, which he credited for helping calm the situation Sunday night in Minneapolis. He demanded that similarly tough measures be taken in New York, Philadelphia, Los Angeles and other cities.