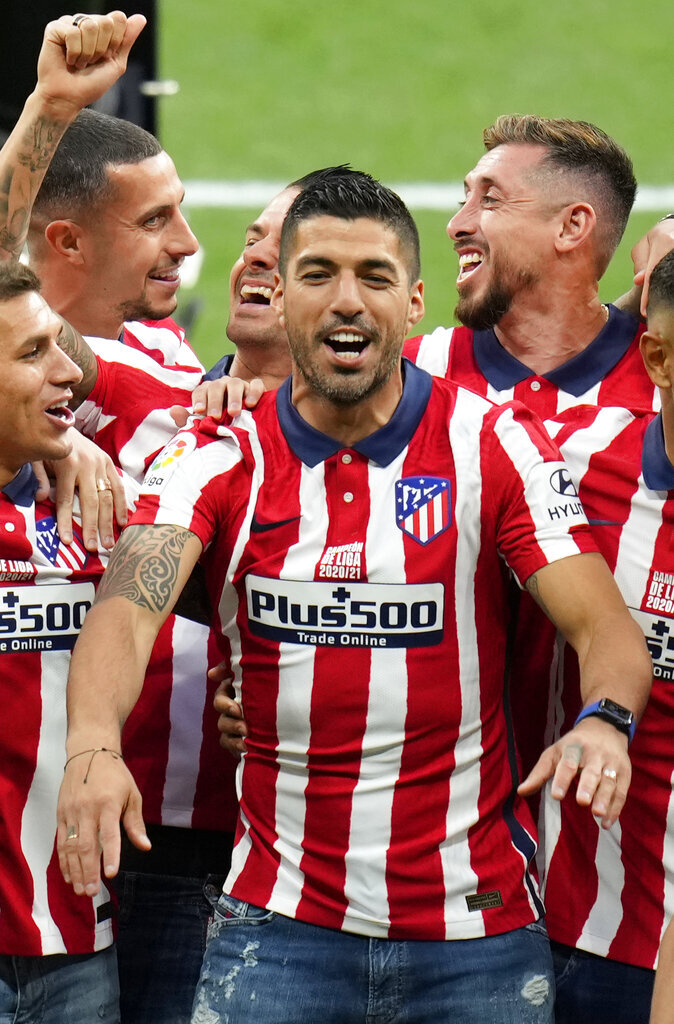 Atletico Madrid's Luis Suarez, centre, celebrates with the team at the Wanda Metropolitano stadium in Madrid, Spain, Sunday, May 23, 2021. Atletico Madrid survived a dramatic final round to clinch its first Spanish league title since 2014 with a 2-1 come-from-behind win at Valladolid on Saturday. (AP Photo/Manu Fernandez)

The presentation came a day after Atlético beat Valladolid 2-1 to secure its first league title in seven years. The away victory left the team two points ahead of defending champion Real Madrid after the final round.

Atlético players lifted the trophy as the club's anthem played through loudspeakers and confetti exploded into the air in the background.

Fans were not allowed in the Wanda Metropolitano because of the coronavirus pandemic, but they filled some of the streets of Madrid as the team paraded across the Spanish capital.

“We need to thank the fans for their support in the good and the bad moments,” club president Enrique Cerezo said. “They have always been there for us.”

Fans were told to stay in their cars to accompany the team during the parade but many stood on sidewalks along the route, as well as at the Fountain of Neptune plaza, which is the club's traditional celebration spot.

Koke draped a club scarf around the Neptune statue after the team arrived from Valladolid earlier on Sunday. He also placed a black armband on the statue's arm in honor of a teenage Atlético fan who died in an accident while celebrating the title.

Spanish media reports said the boy died after his head hit a wall at the entrance of a parking garage while he was leaning out of a moving vehicle.

He was among the thousands of Atlético fans who were out on the streets of Madrid after Saturday's match to celebrate the team’s 11th league title.

The club expressed its condolences to the boy’s family, and Cerezo mentioned him during his speech during the title celebrations at the stadium.

“Our happiness is not complete,” he said. “We lost a member of the ‘Red and White’ family.”

Luis Suárez, who was key in the title campaign after being let go by Barcelona against his wishes, confirmed that he will be coming back with Atlético next season. The Uruguay striker scored the winning goals as the team rallied to victory in the final two rounds. He finished as the team's leading scorer in the league with 21 goals.

Coach Diego Simeone is also set to return for the final year on his contract, and his squad will remain mostly the same, led by Suárez, Koke, Jan Oblak, Marcos Llorente and João Félix.

Only Barcelona and Real Madrid had won the league since Atlético clinched the title in 2014. Atlético's previous league win before 2014 had been in 1996, when Simeone still played as a midfielder for Atlético.