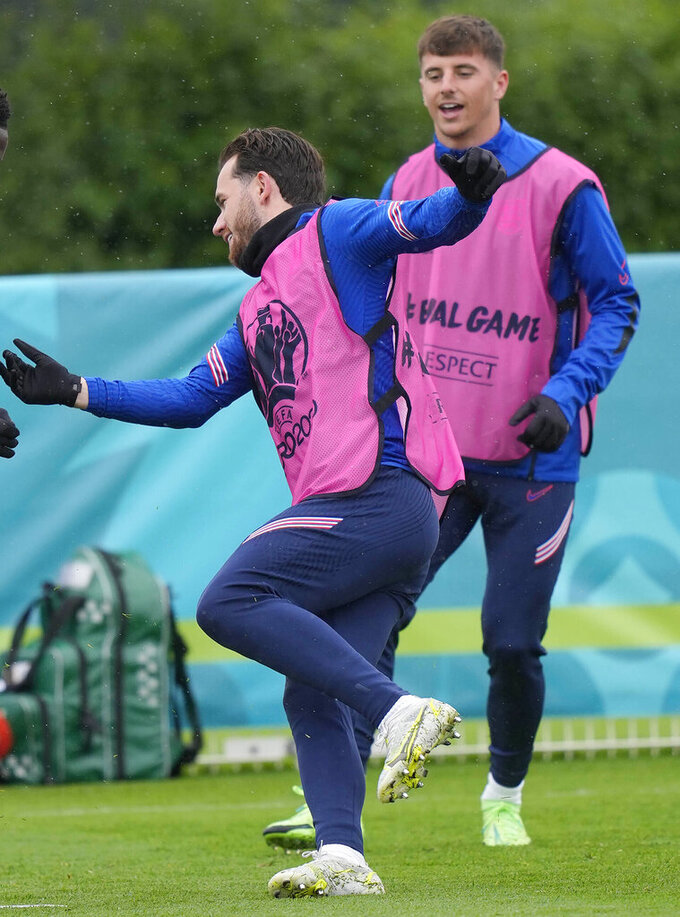 England's Mason Mount, right, and England's Ben Chilwell, left, during a team training session at Tottenham Hotspur training ground in London, Monday, June 21, 2021 one day ahead of the Euro 2020 soccer championship group D match against Czech Republic. After a positive test for Scotland midfielder Billy Gilmour, Mason Mount and Ben Chilwell have been told to self isolate following "interaction" with Gilmour during England's 0-0 draw with Scotland at Wembley Stadium on Friday. (AP Photo/Frank Augstein)

Separated from their England teammates, Mason Mount and Ben Chilwell are trying to fill the days until they can end self-isolation at their St. George's Park training base and hotel complex.

It's a frustration so many millions have endured during the pandemic, having to quarantine after being considered a close contact of a person who later tested positive for the coronavirus.

At the European Championship, it's meant the playing availability of Mount and Chilwell is more in the hands of the Public Health England government agency than national team coach Gareth Southgate. They are due to exit isolation on Monday, on the eve of the last-16 meeting with Germany at Wembley Stadium, but there's hope they can be eased back into socially-distanced training over the weekend.

There is still lingering frustration in the England camp over the determination that led to Mount and Chilwell being told to isolate until Monday. It followed a lengthy post-match interaction with Scotland midfielder Billy Gilmour, a Chelsea teammate, after England's 0-0 draw at Wembley Stadium last Friday.

While Gilmour later tested positive, none of the Scotland players he was in the camp with were considered close contacts.

With Scotland knocked out on Tuesday, Mount and Chilwell are the only players of the 16 teams still standing in Euro 2020 currently in isolation.

Coronavirus protocols, including banning family members from team hotels, have prevented outbreaks in teams at Euro 2020, unlike at the ongoing Copa America in Brazil, where half of the teams have reported COVID-19 cases.

While most Euro 2020 teams restrict media access to remote video links, England is a rare case of allowing a limited number of reporters into its training base to speak to players face-to-face — and even play darts against them, with regular disinfecting.

Technology helps keep Mount and Chilwell connected with the rest of the England squad as they dial into live streams of team meetings and training sessions.

When Sheeran was brought to entertain the players at St. George's Park on Wednesday, the acoustic live gig was set up in sight of the isolating players' windows. They just couldn't go downstairs to join the BBQ.

A separate bubble has been created around Mount, who had started the opening win over Croatia and the Scotland game, and Chilwell to include a physiotherapist to help them on fitness work while consigned to their rooms.

Mount being separated from the squad is particularly hard on his best friend, Declan Rice.

“A few of the lads said you look lost,” the England midfielder said Friday. “I said, ‘Yeah I am.’”