English sports gets $400M bailout, in talks on fans' return 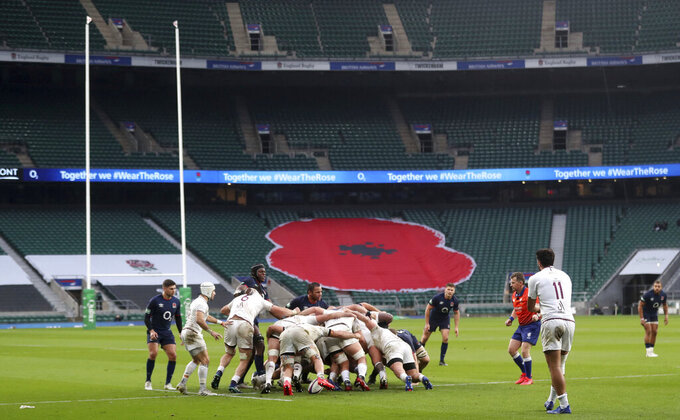 LONDON (AP) — English sports are receiving 300 million pounds (almost $400 million) from the government — with half going to rugby — to help them survive without fans being allowed into venues during the pandemic.

It has been eight months since full stadiums were allowed, although the government also expressed hope Thursday that fans could soon be allowed back in to watch games.

Even with England in a second national lockdown that runs through Dec. 2, Culture Secretary Oliver Dowden said there is “definitely a chance” that supporters could return to sports before the end of the year as restrictions are eased.

The government had originally planned to start allowing spectators back into sports events in October but shelved those plans because of a second wave of coronavirus cases.

Rugby is receiving half of the “Sports Winter Survival Package," which is mainly in the form of loans, but men's professional football and cricket are not included.

Football will receive 28 million pounds, with 3 million pounds for the Women's Super League and second division Championship, and the rest going to men's teams outside of the four professional divisions.

“These are unprecedented times for our sector, and those sports and leagues that rely so heavily on spectators for their income that have been especially impacted by the pandemic,” said Tim Hollingsworth, chief executive of Sport England. “The role they play in their local communities is vital and this package of support from government will be hugely welcomed.”