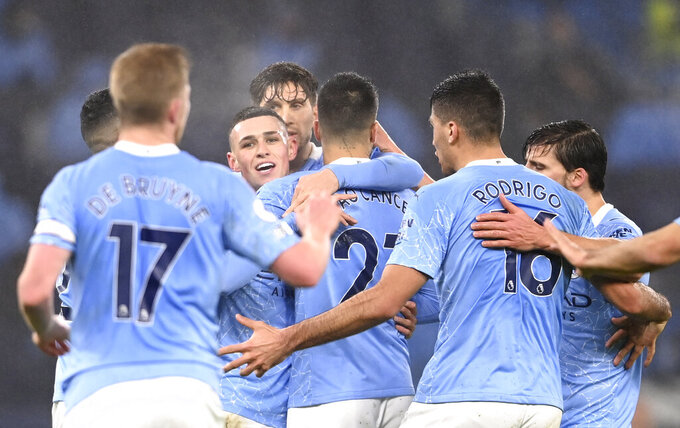 The coronavirus outbreak at Aston Villa has led to the postponement of another game as the Premier League holds talks with captains and managers of clubs to urge compliance with enhanced regulations.

“A significant number of players and staff remain in isolation" at Villa, the league said on Thursday after granting the central England club's request to no longer play Everton on Sunday.

Villa, whose game against Tottenham on Wednesday was also called off, said it expects the isolating players and staff to be part of trainings again from Sunday.

The league has tightened coronavirus protocols, including telling players and managers to avoid shaking hands and hugging during goal celebrations. That message was being reinforced in virtual meetings with club captains and managers before this weekend's games.

“Some of the scenes we have seen have been brainless and give out an awful message,” said Julian Knight, who chairs the House of Commons select committee overseeing sports policy.

The Premier League is among the elite sports competitions allowed to continue during England's third national lockdown which began last week. But the government expressed concern on Wednesday about players not adhering to the regulations when they are so closely celebrating goals — just as the public is largely told to avoid such close contact.

Some players also flouted national rules by holding gatherings in their homes around Christmas.

The Premier League issued a statement Thursday together with the organizers of the lower men's divisions and the Women’s Super League assuring the government that the rules will be followed.

“Safety is a collective effort and football requires the ongoing support of clubs, managers, players and all those involved in staging matches to continue to manage the spread of infection and set the right example to the public on and off the pitch," the statement said.

“The game has a responsibility and during this critical period it is down to everyone involved to ensure they follow government rules and our protocols. We have seen the huge contribution players have made to the national effort and they must continue to use their influence in demonstrating the importance of following the rules.”

While Harry Kane celebrated on his own after scoring in Tottenham's 1-1 draw with Fulham on Wednesday, Manchester City's players still hugged after Phil Foden scored in a 1-0 victory over Brighton.

“Sometimes the brain is a subconscious one and you are just there in the moment,” City manager Pep Guardiola said. “You are not thinking.”

The first game postponed this season because of COVID-19 was Villa’s match against Newcastle in early December, but that was because of virus cases in the Newcastle squad. The league said it hopes to play that game on Jan. 23 since Villa and Newcastle have been eliminated from the FA Cup and will not have matches in the competition that weekend.

A more contagious variant of COVID-19 is sweeping across Britain where there have been more than 84,000 known deaths from the disease and hospitals are struggling to cope with the demands caused by an increase in infections.

A further 1,564 deaths were announced on Wednesday, the highest on a single day since the start of the pandemic last year.

While the government has given football special privileges to continue, West Bromwich Albion manager Sam Allardyce wants politicians more focused on why Britain has one of the highest COVID-19 death tolls in the world.

“We all want to carry on playing football, and if we all adhere to the rules and regulations slightly better than we already have, we will,” Allardyce said. “But I get a little peeved with players called for being irresponsible. Why the government want to intervene is an absolute nonsense with the mess they’re making of it at the moment.

“Their care has not been the greatest and it’s irresponsible the government wants to intervene in football, they need to look at their own house before they look at ours."