EPL postpones another game but doesn't want to pause season 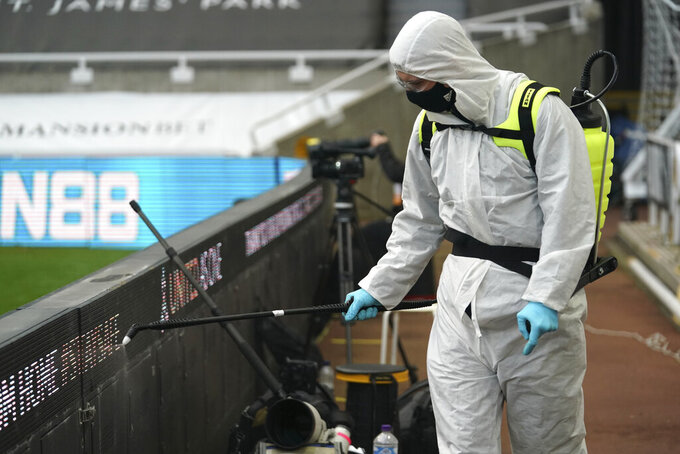 A worker disinfects part of the ground before an English Premier League soccer match between Newcastle United and Everton at the St. James' Park stadium in Newcastle, England, Sunday Nov. 1, 2020.(Owen Humphreys/Pool via AP)

LONDON (AP) — The Premier League made it clear it doesn't intend to suspend the competition despite being forced to call off a second game this week amid concerns across England about a fast-spreading new variant of the coronavirus.

Fulham's game at Tottenham had to be postponed on Wednesday, while the government's tightening of coronavirus restrictions meant no Premier League stadiums will be allowed to have fans going forward.

But the league is resisting calls, including those from West Bromwich Albion manager Sam Allardyce, to suspend the competition for a second time during the pandemic. It was halted for 100 days from March to June last season during the first infection wave.

“The Premier League has not discussed pausing the season and has no plans to do so,” the league said. "The league continues to have confidence in its COVID-19 protocols to enable fixtures to be played as scheduled, and these protocols continue to have the full backing of government.

“With the health of players and staff the priority, the League is also fully supportive of how clubs are implementing the protocols and rules.”

Two days after coronavirus cases in the Manchester City squad led to its game at Everton being postponed on Monday, Fulham told the Premier League it could not play Tottenham because of an outbreak of coronavirus cases.

Fulham has had a “significant rise” in coronavirus cases and “a number of players showing symptoms” on Wednesday, according to the league. Fresh coronavirus testing will now take place at the club.

“The Premier League board has consulted its medical advisors and the decision to postpone the game has been taken as a precaution and with the health of players and staff as the priority," the league said.

The Premier League on Tuesday reported its highest number of weekly positive cases: 18 after 1,479 tests on players and club staff from Dec. 21-27.

But Manchester City was able to resume first-team practice on Wednesday, two days after the training ground was closed, because new coronavirus testing revealed no new positive cases. Others, including players Gabriel Jesus and Kyle Walker, are continuing to isolate after contracting the coronavirus.

“Safety remains our number one priority, and the club will continue to proceed with great caution,” City said.

But the lack of clarity over how and when postponement calls are being reached has caused irritation among some clubs.

While waiting for a decision, Tottenham manager Jose Mourinho wrote a post on Instagram laced with sarcasm: “Match at 6 pm... We still don’t know if we play. Best league in the world.”

Across England, forms of lockdown are being re-imposed due to concerns about the spread of a more transmissible variant of COVID-19 that the government disclosed details of two weeks ago.

More than 50,000 cases were reported in a single day for the first time on Tuesday, and the number of hospitalized COVID-19 patients has surpassed the first peak of the outbreak in April.