Erin Jackson favored to end US speedskating drought in China 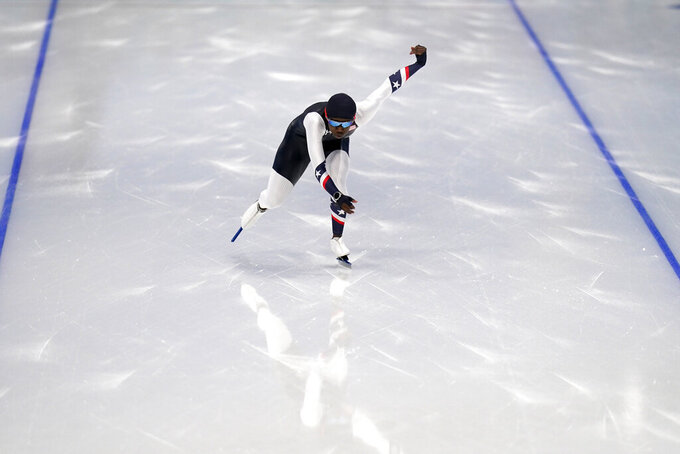 Erin Jackson of the United States skates during a speedskating practice session at the 2022 Winter Olympics, Wednesday, Feb. 9, 2022, in Beijing. (AP Photo/Gerald Herbert)

BEIJING (AP) — Erin Jackson shocked herself by making the U.S. Olympic team four years ago. Barely confident of staying upright after just four months on the ice, she was just happy to be in Pyeongchang. Now, she’s the favorite for speedskating gold in Beijing.

“This time around I’m coming in swinging and I’ve got my sights set,” she said.

The former inline and roller derby skater from balmy Ocala, Florida, has made huge strides since 2018, when she finished 24th in the 500 meters in South Korea.

Jackson became the first Black woman to win a World Cup race in November. She took four of this season’s eight races in the 500, medaled in two others and is No. 1 in the world in the sprint race, which seemingly made her a lock for the Olympic team.

A slip of her blade nearly did her in. She stumbled mid-race at the U.S. trials in early January and finished third. Only the top two were guaranteed berths, leaving Jackson sleepless that night wondering if her dream had been dashed.

Brittany Bowe wouldn’t hear of it. Bowe, a close friend of Jackson, gave up her spot in the 500. Bowe will compete in the event on Sunday, too, after the U.S. picked up a third quota spot.

No American woman has won the 500 since Bonnie Blair claimed three straight Olympic titles from 1988-1994. The last individual medal of any kind by a U.S. woman came in 2002.

"Erin is absolutely on the top of her game now,” Bowe said. “I cannot wait to see what she has in store.”

Neither can coach Renee Hildebrand, who will be watching from Florida.

Jackson and Bowe, along with teammate Joey Mantia, are all from Ocala and grew up training as inline skaters on two wheels under Hildebrand before transitioning to ice.

“Erin's technique is still not what she wants it to be on ice," Hildebrand said. “She’s really quick right now. Eventually, she’s going to be really quick and really good with her technique. I think she will break some records.”

Jackson began skating at age 10, quickly transforming into a self-described rink rat. She looked up to Bowe, who at 33 is four years older.

“This just makes it so much sweeter,” Jackson said of Bowe’s gesture. “It makes it 10 times more awesome.”

Jackson’s stumble is one of several obstacles she’s overcome. In 2019, she endured back problems. Then she missed the entire 2020-21 season because of COVID-19 quarantines for being a close contact and because of an eye injury caused by a bungee cord snapping loose.

Through it all, Jackson kept the same composure she showed after her slip at trials.

“She’s a class act through everything,” said Matt Kooreman, national sprint coach for US Speedskating.

Jackson describes herself as more of a student than an athlete. She certainly has the credentials, having graduated with honors from the University of Florida in 2015 with a degree in materials science and engineering. She earned an associate’s degree in computer science and is working toward another associate’s in kinesiology.

“I couldn’t imagine not taking every opportunity I can to better my education,” she said. “I value education so much.”

Jackson took a year off from classes to prepare for the Olympics, but she’s missing the academic grind.

“I’m better all around when I’m a little busier,” she said. “Right now, I feel like I’ve gotten really lazy.”

Among her many goals is increasing diversity in a sport dominated by white athletes. She has reached out to Edge Outdoors, a Washington state non-profit that provides scholarships to cultivate women of color in snow sports, about possibly starting a Utah chapter.

“Young girls are writing to her. She’s enjoying that part of it now,” Hildebrand said. "She’s understanding that she can make history in more ways than one. We need more diversity in our sport, both inline and on ice. To see skaters of all different colors would be great.”

The racial reckoning that took hold in the U.S. after George Floyd was killed by police in 2020 helped lay the groundwork for change decades in the making in sports. Jackson has her own thoughtful approach.

“I stay out of all the things that are going on like that. I feel that, of course, because it’s something you can’t really escape,” she said. “But I try to help by being a positive example. There’s a lot of negativity in the world and I try to fight it by being an example of something good.”

One of her inspirations is her 72-year-old father, Tracy. He moved to Salt Lake City from Florida last June to live with his only daughter. Her mother, Rita, died in 2011 when Jackson was a senior in high school.

“He means a lot to me,” Jackson said. “I’ve always been a daddy’s girl. Just having his love here and now, it’s like I never left.”

Jackson’s evolution from the rough-and-tough pack skating of roller derby on four wheels to racing on blades in a pair against the clock has been gradual. Her coach Ryan Shimabukuro got her biking, lifting weights and dry-land training, things she’d never done as an inliner.

“The ice is so much more technical,” Shimabukuro said. “You make one mistake, you can lose 10 spots, especially in the 500 meters where the smallest margin is a thousandth of a second.”

Jackson has proven a quick study, to the point where Shimabukuro has had to tell her to knock off wearing herself out.

“She’s a game-day racer,” he said. “That’s one of her biggest attributes. No matter what the situation is on the day of the race she can up her level.”

A lifelong learner, Jackson figures she’s still early in her education on ice.

“I can’t see myself stopping now when I’m just figuring out what I’m doing,” she said. “I feel like it’s the beginning.”