Ethiopia says Eritrean troops are pulling out of Tigray 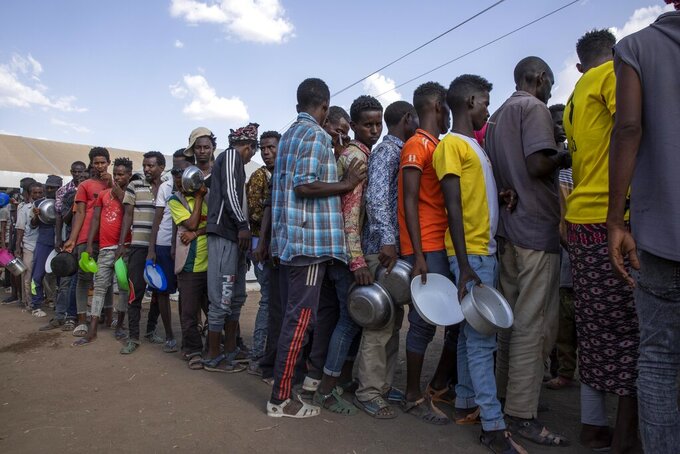 KAMPALA, Uganda (AP) — Ethiopian authorities said on Saturday that Eritrean troops have started withdrawing from Tigray, where they have been fighting on the side of Ethiopian forces in a war against the region's fugitive leaders.

The Eritreans “have now started to evacuate” Tigray and Ethiopian forces have “taken over guarding the national border," Ethiopia’s Ministry of Foreign Affairs said in a statement.

It's not clear how many Eritrean troops have left, and some in Tigray assert that the Eritreans aren't leaving at all. The region's leaders have charged that Eritrean troops sometimes dressed in Ethiopian military uniforms.

Ethiopia's government faces intense pressure to end the Tigray war, which started in November when Prime Minister Abiy Ahmed deployed troops there following an attack on federal military facilities. The region's fugitive leaders do not recognize Abiy's authority after a national election was postponed last year amid the coronavirus pandemic.

The G-7 group of nations on Friday issued a strong statement calling for the “swift, unconditional and verifiable” withdrawal of Eritrean troops from Tigray after Abiy said last week the Eritreans had agreed to go.

That statement also urged “the establishment of a clear, inclusive political process that is acceptable to all Ethiopians, including those in Tigray, and which leads to credible elections and a wider national reconciliation process.”

The International Crisis Group, in an analysis released Friday, warned of the risk of a “protracted” war, citing an entrenched Tigrayan resistance combined with Ethiopian and Eritrean authorities’ determination to keep Tigray’s fugitive leaders from power.

“That would further devastate Tigray and greatly harm Ethiopia, the linchpin state in the Horn of Africa,” the report said. “With a decisive battlefield win for either side a remote prospect, parties should consider a cessation of hostilities that allows for expanded humanitarian aid access. This practical first step would reduce civilian suffering and ideally pave the way for a return to dialogue down the road.”

There are increasing reports of atrocities such as massacres and rapes in the war, and concern is growing about a lack of food and medical care in Tigray, home to 6 million of Ethiopia’s more than 110 million people.

The United States has characterized some abuses in Tigray as “ethnic cleansing,” charges dismissed by Ethiopian authorities as unfounded. Officials in Addis Ababa, the Ethiopian capita, haven’t cited a death toll in the war.

The United Nations and an Ethiopian rights agency announced last week they had agreed to carry out a joint investigation into abuses in Tigray, where fighting persists as government troops hunt down fighters loyal to the Tigray People's Liberation Front, the party that dominated national politics for decades before the rise of Abiy.