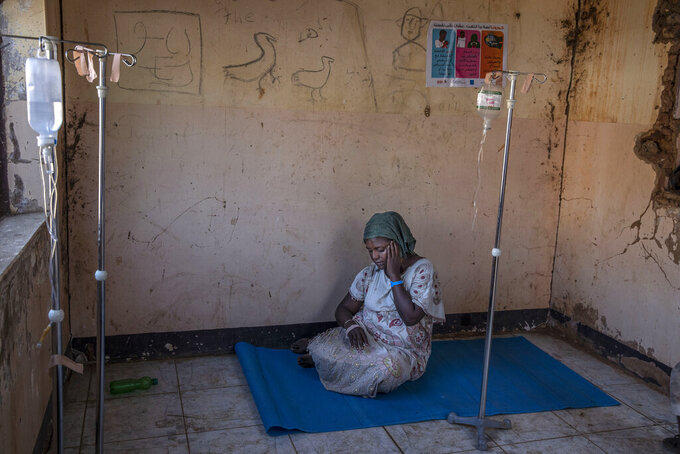 FILE - In this Nov. 25, 2020, file photo, a woman who fled the conflict in Ethiopia's Tigray region waits to get treatment at a clinic in Umm Rakouba refugee camp in Qadarif, eastern Sudan. In a remote part of neighboring Sudan, no coronavirus testing is taking place in the crowded camps that are now home to more than 45,000 Ethiopian refugees. People share shelters and stand close together in lines for food, cash and registration. There are few face masks to be seen. (AP Photo/Nariman El-Mofty, File)

HAMDAYET, Sudan (AP) — Ethiopia’s month-long war in its northern Tigray region has severely hampered efforts to fight one of Africa’s worst coronavirus outbreaks, as the fighting has displaced almost 1 million people and strained local humanitarian services to the breaking point.

Tens of thousands of those fleeing the conflict between Tigrayan and Ethiopian federal forces have crossed into neighboring Sudan, where countrywide virus numbers are also rising rapidly.

More than 45,000 refugees from the Tigray conflict are now living in remote parts of Sudan, where they have taken shelter in crowded camps that have no coronavirus testing or treatment capabilities.

“With COVID-19, it’s not comfortable in these buses,” said one refugee, Hailem, who said over 60 people were crammed onto the transport that took them from Hamdayet, on the Sudanese side of a main border crossing, to the camps.

Many staying in the camps are forced to share shelters and crowd together in lines for food, cash and registration with different aid agencies. There are few face masks to be seen — or available for distribution.

At the Umm Rakouba camp, Javanshir Hajiyev with aid group Mercy Corps told The Associated Press that the number of chest infections was high, but that humanitarian workers had no materials to test for the coronavirus.

Few of the refugees see the pandemic as their first concern, having witnessed deadly attacks as they fled Ethiopia, and now living in fear for family members left behind.

“I just escaped from war,” said one, Gebre Meten. “I think the war is worse.”

The virus outbreak is a threat, Gebre said, but the drastic conditions in the refugee camps make people forget its risks, as they face hunger, heat, and thirst.

But Sudan’s growing virus cases has raised concerns that a new countrywide lockdown could be imposed — including measures that could stop further refugees from crossing the border.

“The people that are fleeing from conflict and violence are also fleeing for their lives,” U.N. refugee chief Filippo Grandi said last weekend about the Tigray conflict. “So we have a difficult dilemma.” He added that with the right health measures, “the policy of open borders” can be maintained.

According to humanitarian officials, the crisis in the Tigray region of 6 million people remains critical, with medical supplies running low, including those needed to fight the coronavirus pandemic.

“The pandemic is still with us, despite the fighting and a new humanitarian crisis unfolding in its wake,” the International Committee for the Red Cross said recently after visiting struggling health centers in the Tigray and neighboring Amhara regions.

The largest hospital in northern Ethiopia, in the Tigray capital of Mekele, “is running dangerously low on sutures, antibiotics, anticoagulants, painkillers, and even gloves,” said the ICRC’s Maria Soledad.

All humanitarian aid to the Tigray region, from medical supplies to food, has been blocked since the fighting began, to the growing distress of the humanitarian community and health experts alike. On Wednesday, the U.N. said it had signed a deal with Ethiopia’s government to allow aid access in Tigray — but only to those areas of it under the federal government’s control.

Norwegian Refugee Council chief Jan Egeland said aid workers still “have a lot of concerns” as they prepare to return to the Tigray region, where there has been scant information on how the conflict has impacted local health facilities and infrastructure, or the outbreak’s spread.

Ethiopia’s health minister, Lia Tadesse, did not respond to a request for comment and details on whether the ministry has received any updates from the region on new infections over the past month.

“Clearly, an effective response to pandemic outbreaks is always challenged when there’s instability,” the director of the Africa Centers for Disease Control and Prevention, John Nkengasong, told reporters recently. The coronavirus situation in Ethiopia “will be very challenging to bring under control,” he added.

As an example, Nkengasong said it took more than two years to end a recent Ebola outbreak in eastern Congo under the constant threat of attack by rebel groups despite having “the best tools we’ve ever had” against the disease, including new vaccines.