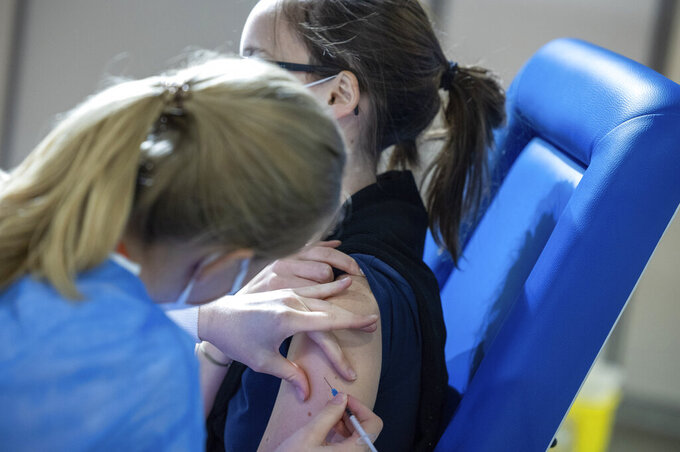 A healthcare worker administers a dose of the AstraZeneca COVID-19 vaccine to a woman at the Brussels Expo center in Brussels, Thursday, March 4, 2021. The Expo is one of the largest vaccination centers in Belgium. (AP Photo/Olivier Matthys)

BRUSSELS (AP) — European Union figures show that the 27-nation bloc has allowed the export of well over 34 million doses of COVID-19 vaccines over the past weeks, despite shortages at home as it continues to struggle to get its vaccine drive up to speed.

The EU said more than 9.1 million doses were exported to the United Kingdom alone, at a time when diplomatic tensions rose over vaccine exports and the implementation of the Brexit divorce agreement.

The figures show that even if the EU is accused of “vaccine nationalism” by checking some exports, only one shipment of a quarter-million doses was effectively held back. The exports are almost as high as the roughly 45 million doses that have been distributed within the EU as of last week.

In the wake of rumors that doses that should have stayed in the bloc had been siphoned off, the EU instituted a special export transparency system late in January to make sure companies with delivery commitments to the EU would not ship them elsewhere. On Thursday, the system was extended until the end of June.

With the publication of the figures the EU wanted to show it remains a fair trading partner to both third nations and big pharma companies based in and producing out of Europe. "Even during a very critical health situation, the EU has made a considerable effort to be a reliable and responsible trading partner,” said Trade Commissioner Valdis Dombrovskis.

The bloc has contract commitments with six companies for 2.6 billion doses for a population of 450 million, and has openly clashed with one — AstraZeneca — after the company said its first-quarter promises of 80 million doses would in reality amount to less than half as many due to what it called technical issues.

Health Commissioner Stella Kyriakides warned that the EU would clamp down if any company tried to dupe it. “Not all companies are honoring their agreements with the EU despite having received a down payment to enable sufficient production. We will insist that compliance is ensured,” she said.

The EU said that of 249 authorizations for export granted only one was refused. Last week, a shipment of more than a quarter million AstraZeneca vaccines destined for Australia was blocked from leaving the EU.

EU exports still go beyond the 34.1 million doses that left under the special export regime, since the system does not cover shipments to countries like Israel, Norway and Switzerland, regions like the Western Balkans and most developing countries around the world.

The EU has been under pressure to increase the pace of vaccinations but member nations have complained that deliveries woefully trail demand. Nowhere is the discrepancy in vaccinations more glaring than in a comparison with Britain.

The last available figures show that 35% of the U.K. adult population has had a vaccine shot while the figure in the EU stands at 9.6%.

The U.K. heads the EU export list, with Canada coming second with 3.917 million doses, while Mexico was sent 3.134 million. The United States came 8th in the list with export approvals standing at 953,723.

The figures leave a sour taste for some, especially considering the export numbers to the U.K. EU Council President Charles Michel lashed out this week saying that “the facts do not lie. The United Kingdom and the United States have imposed an outright ban on the export of vaccines or vaccine components produced on their territory.”

Prime Minister Boris Johnson has denied there is such a ban, but the EU export figures do indicate that the bloc has had a role in the success of the British drive.

The figures were provided by the EU's executive Commission to representatives of member countries. Overall, the representatives have no issue with companies that respect their EU contract to continue such exports.

The EU is a major multinational pharmaceuticals hub with massive production capacity and wants to ensure that the companies that respect their commitments continue exporting. “The EU has never stopped exporting," said Michel.

Samuel Petrequin in Brussels contributed to this report.