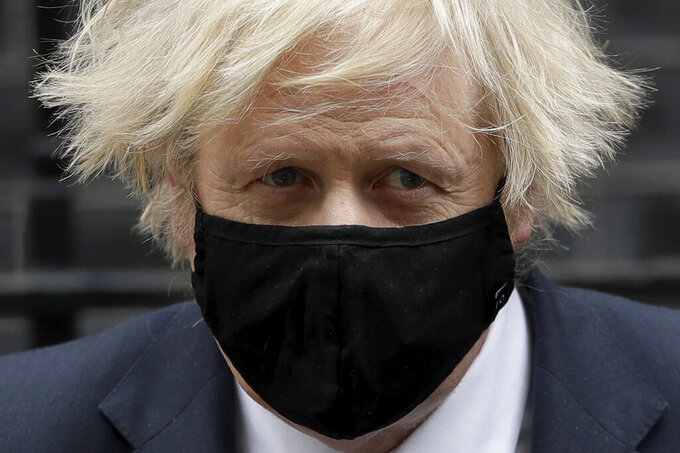 BRUSSELS (AP) — The European Union moved Wednesday toward stricter export controls for coronavirus vaccines, seeking to make sure its 27 nations have more COVID-19 shots to boost the bloc's flagging vaccine campaign amid a surge in new infections.

The EU’s executive Commission said on the eve of a summit of the EU's leaders that it has a plan to guarantee that more vaccines produced in the bloc are available for its 450 million citizens even if that comes at the cost of helping nations outside the bloc, most notably Britain.

EU officials said trade with the United States should not be affected and assured nations that sought to have an open, transparent relationship with the bloc that they had little to fear.

The EU move is expected to be a blow to Britain, whose speedy vaccination rollout has been eyed with envy by many EU nations, especially since it came as the U.K. formally completed its Brexit divorce from the bloc. The latest figures show that 45% of Britons have had at least one vaccine shot, compared to less than 14% for the bloc.

“So it’s clear that we also need to look at those aspects of reciprocity and proportionality,” he said.

In the post-Brexit era, both sides have been fighting over everything from diplomatic representation to border controls and red tape, but they did not want to take the same confrontational tone over live-saving vaccines, especially when the World Health Organization is raising alarms over rising new infections across Europe.

“In the end, openness and global cooperation of all countries will be key to finally overcome this pandemic and ensure better preparation for meeting future challenges," the statement said.

European Commission President Ursula von der Leyen said global cooperation over vaccines has been the EU standard. The bloc has approved sending 41 million vaccine doses to 33 countries in the last seven weeks and believes that it stands at the forefront of international vaccine-sharing efforts. The overall total of exported vaccines is bigger still since many more were not covered by the recent export regime.

Some EU member states gearing up for Thursday's summit were fearful, however, that too tough an export stance could amount to a de facto export ban that undermines the EU's reputation as an open trading bloc.

Under a less stringent export control system in force so far, only one vaccine shipment in 381 has been barred. That was heading to Australia, which has a very limited coronavirus outbreak compared to the third surge of infections now facing many EU nations.

“We have secured more than enough doses for the entire population. But we have to ensure timely and sufficient vaccine deliveries to EU citizens,” von der Leyen said. "Every day counts.”

Under the new regime, EU officials would also take into account reciprocity and finding a right balance.

Canada also gets vaccines shipped from Europe and has received assurances "that these measures will not affect vaccine shipments to Canada,” a Canadian government spokesperson said.

The EU has been feuding with AstraZeneca for months over exactly how many vaccine doses would be delivered by certain dates. Several vaccine producers, including Pfizer-BioNTech and AstraZeneca, were hit by technical production delays over the winter, just as worldwide demands for coronavirus vaccines soared. AstraZeneca has been producing less than half the doses the EU was counting on.

British Prime Minister Boris Johnson has sought to ease the tensions over vaccines, speaking by phone in the past few days to European leaders including von der Leyen and French President Emmanuel Macron.

“The partnership we have with our European colleagues is very, very important and we continue to work with them,” Johnson told lawmakers on Wednesday. “I don’t think that blockades of either vaccines … or ingredients for vaccines are sensible.”

“I would just gently point out to anyone considering a blockade … that companies may look at such actions and draw conclusions about whether or not it is sensible to make future investments in countries where blockades are imposed,” Johnson said.