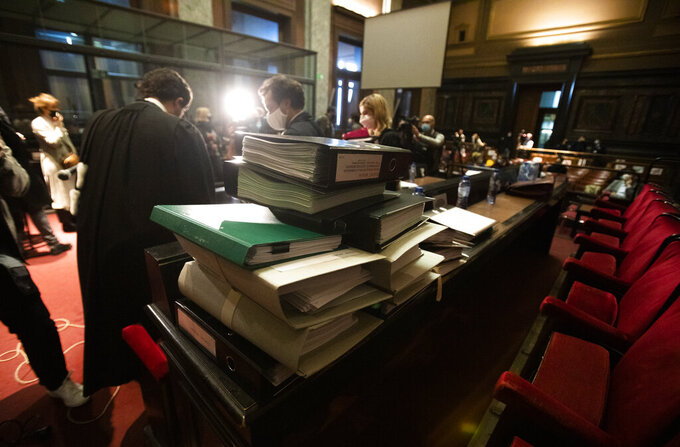 Stacks of documents are placed on a table at the start of a hearing, European Commission vs AstraZeneca, at the main courthouse in Brussels, Wednesday, May 26, 2021. The European Union took on vaccine producer AstraZeneca in a Brussels court on Wednesday with the urgent demand that the company needs to make an immediate delivery of COVID-19 shots the 27-nation bloc insists were already due. (AP Photo/Virginia Mayo)

BRUSSELS (AP) — The European Union took on vaccine producer AstraZeneca in a Brussels court on Wednesday and accused the drugmaker of acting in bad faith by providing shots to other nations when it had promised them for fast delivery to the EU's 27 member countries.

During an emergency hearing, the EU asked for the shipment of missing doses to the region and accused AstraZeneca of postponing deliveries so the Anglo-Swedish company could service others, and Britain in particular.

AstraZeneca lawyers denied any wrongdoing and said the pharmaceutical firm has always done its best to fulfill delivery commitments.

AstraZeneca’s contract with the European Commission, the EU's executive arm, foresaw an initial 300 million doses being distributed, with an option for another 100 million. The doses were expected to be delivered throughout 2021. But only 30 million were sent during the first quarter.

Deliveries have increased slightly since then but, according to the EU commission, the company is set to supply 70 million doses in the second quarter when it had promised 180 million. A lawyer for AstraZeneca said Wednesday that “more or less 60 million doses” from the total order have been delivered so far.

EU lawyer Rafael Jafferali told the court that AstraZeneca expects to deliver the total number of contracted doses by the end of December, but he said that “with a six-month delay, it’s obviously a failure."

Until the company has caught up with the delays, Jafferali asked the court to force AstraZeneca to pay 10 euros per day for each non-delivered dose and to fine the drugmaker 10 million euros ($12.2 million) per day and breach of the company's contractual obligations.

A lawyer representing AstraZeneca, Hakim Boularbah, said it's impossible for the company to meet the deadlines and accused the Commission of trying to change the terms of their contract. He argued that the delivery schedule was based on estimates and that AstraZeneca could not be liable in case of delays.

A judgment is to be delivered at a later date. In addition to the emergency action, the European Commission has launched a claim on the merits of the case for which a hearing hasn’t yet been set by the court.

The EU has insisted its gripes with the company are about deliveries only and has repeatedly said that it has no problems with the safety or quality of the vaccine itself. The shots have been approved by the European Medicines Agency, the EU’s drug regulator.

The EU's main argument is that AstraZeneca should have used six production sites for EU supplies as part of a "best reasonable effort” clause in the contract. Jafferali said that 50 million doses that should have been delivered to the EU went to third countries instead, “in violation” of the contract. The European Commission agreed to pay 870 million euros for the shots.

Charles-Edouard Lambert, another lawyer on the EU team, said AstraZeneca decided to reserve production at its Oxford site for Britain.

“This is utterly serious. AstraZeneca did not use all the means at its disposal. There is a double standard in the way it treats the U.K. and member states," he said.

AstraZeneca said it informed the EU's executive Commission in a detailed production plan that the UK manufacturing chain would firstly be dedicated to British supplies. The company noted that delays in deliveries not only affected the EU, but the whole world.

Boularbah said the company's May 2020 agreement with the U.K. government and Oxford University, the vaccine's co-developer, to supply 100 million doses of vaccine at cost clearly gave priority to Britain.

“It’s very shocking to be accused of fraud,” Boularbah said, calling it “a groundless accusation.”

The EU also accused AstraZeneca of misleading the European Commission by providing data on the delivery delays that lacked clarity.

While the bloc insists AstraZeneca has breached its contractual obligations, the company says it has fully complied with the agreement, arguing that vaccines are difficult to manufacture, with dozens of components produced in several different nations, and it made its best effort to deliver on time.

“Unfortunately, to this date, more or less 60 million doses from the order have been delivered,” Boularbah said, adding that AstraZeneca does everything it can to increase production and will deliver the 300 million of doses agreed to as soon as possible.

He played down the urgency claimed by the EU, saying 13 million AstraZeneca doses were stocked in EU member states. However, since the AstraZeneca vaccination takes two shots up to 12 weeks apart, member states can opt to reserve some of their supplies to make sure that recipients can get their second dose on time.

As part of an advanced purchase agreement with vaccine companies, the EU said it invested 2.7 billion euros ($3.8 billion), including 336 million ($408 million), to finance the production of AstraZeneca’s vaccine at four factories.

The long-standing dispute drew media attention for weeks earlier this year amid a deadly surge of coronavirus infections in Europe, when delays in vaccine production and deliveries hampered the EU’s vaccination campaign.

Cheaper and easier to use than shots from rival Pfizer-BioNTech, the AstraZeneca vaccine developed with Oxford University was a pillar of the EU's vaccine rollout. But the EU’s partnership with the firm quickly deteriorated amid accusations it favored its relationship with British authorities.

While the U.K. made quick progress in its vaccination campaign thanks to its AstraZeneca supplies, the EU faced embarrassing complaints and criticism for its slow start. Concerns over the pace of the rollout across the EU grew after AstraZeneca said it couldn't supply EU members with as many doses as originally anticipated because of production capacity limits.

The health situation has dramatically improved in Europe in recent weeks, with the number of COVID-19 hospitalizations and deaths on a sharp downward trend as vaccination has picked up. About 300 million doses of vaccine have been delivered in Europe — a region with around 450 million inhabitants, with about 245 million already administered.

About 46% of the EU population have had at least one dose.

Fanny Laune, another lawyer from the European Commission’s legal team, insisted the case needs to be treated urgently despite vaccination campaigns picking up across the bloc. She said other producers in the EU vaccine portfolio have experienced delays in deliveries and could still be hampered by production problems.

She added that several EU countries have based their vaccine strategy on the AstraZeneca shots and that five member states won’t be able to reach the targets set by the EU by the end of June if the drugmaker doesn't provide the promised doses in time.

“If this legal action allows to save just one life, it justifies an urgent ruling,” Laune said.

AstraZeneca’s lawyers asked the judge to properly assess whether citizens in the EU can’t actually get vaccinated with the company’s shots because of the delivery delays before determining whether the case should be settled urgently.

In total, the European Commission has secured more than 2.5 billion of vaccine doses with various manufacturers, but is now shying away from placing more orders with AstraZeneca. It recently sealed another major order with Pfizer and BioNTech through 2023 for an additional 1.8 billion doses to be shared among EU members.