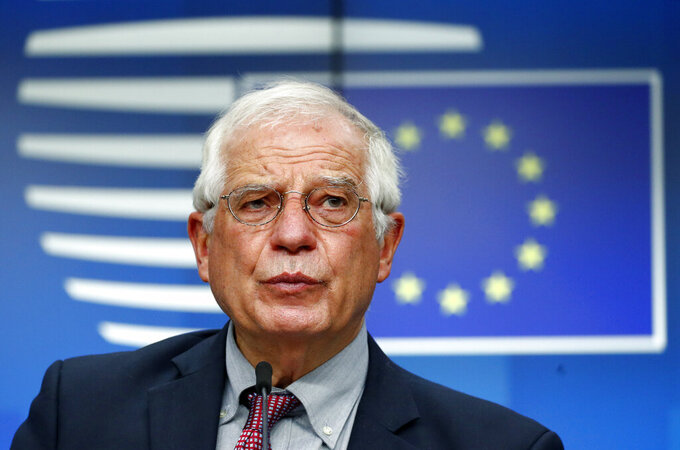 European Union foreign policy chief Josep Borrell speaks during a media conference after a meeting of EU foreign ministers at the European Council building in Brussels, Monday, July 13, 2020. European Union foreign ministers met for the first time face-to-face since the pandemic lockdown and will assess their discuss their relations with China and Turkey. (Francois Lenoir, Pool Photo via AP) 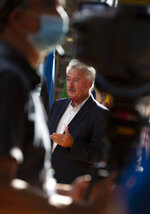 BRUSSELS (AP) — Turkey and the European Union clashed on Monday over Ankara's decision to change the status of Hagia Sophia from a museum to a mosque and its continued energy exploration in disputed Mediterranean waters.

After their their first face-to-face meeting in months, the 27 EU foreign ministers said that they “condemned the Turkish decision to convert such an emblematic monument as the Hagia Sophia," EU foreign affairs chief Josep Borrell said.

“This decision will inevitably fuel the mistrust, promote renewed division between religious communities and undermine our efforts at dialog and cooperation," he said after the meeting of EU foreign ministers.

He said there was “broad support to call on the Turkish authorities to urgently consider and reverse this decision." Hagia Sophia was originally built in Istanbul as a Christian cathedral, and the pope and others have expressed their sadness and criticism of the move by President Recep Tayyip Erdogan.

Greek government spokesman Stelios Petsas said Monday that the EU was “faced with a challenge and insult" meted out by Erdogan.

Turkish Foreign Minister Mevlut Cavusoglu hit back and rejected international intervention concerning its decision to convert Hagia Sophia back into a mosque.

“Hagia Sophia was left as a legacy as a mosque and must be used as a mosque,” Cavusoglu told state broadcaster TRT. “We strongly reject comments that amount to an intervention in Turkey’s sovereign rights.”

Borrell was in Turkey last week where he also discussed Ankara’s disputes with Greece and Cyprus over energy exploration in the eastern Mediterranean region. Turkey has dispatched warship-escorted vessels to drill for gas in an area where Cyprus insists it has exclusive rights. The Turkish government has said it’s acting to protect its interests in the area’s natural resources and those of Turkish Cypriots.

Petsas said that Turkish drilling was blatantly contrary to international obligations and international law" and said that Greece would be looking to prepare a list for possible “political, diplomatic and financial" sanctions.

“If Greece were to turn away from its maximalist ways and agree to a fair sharing (of rights), and if it were to convince Cyprus to a fair sharing of revenues (from the exploration of natural resources), then 80% of our problems would solved,” Cavusoglu said.

Borrell said there were no immediate decisions at Monday's meeting but that the ministers would revisit the issue at their next meeting in Berlin in August.

Even as the rift between both sides was deepening, the 27 EU ministers couldn't get that close among themselves either. It was their first in-person meeting since the coronavirus lockdown set in, but because of social distancing rules, there was only room for lots of elbow bumping for a greeting and little reading of lips, since ministers were wearing masks around the meeting table.

Suzan Fraser in Ankara, Turkey, and Derek Gatopoulos in Athens, Greece, contributed to this report.