EURO 2020: Fans moving across borders will be complicated 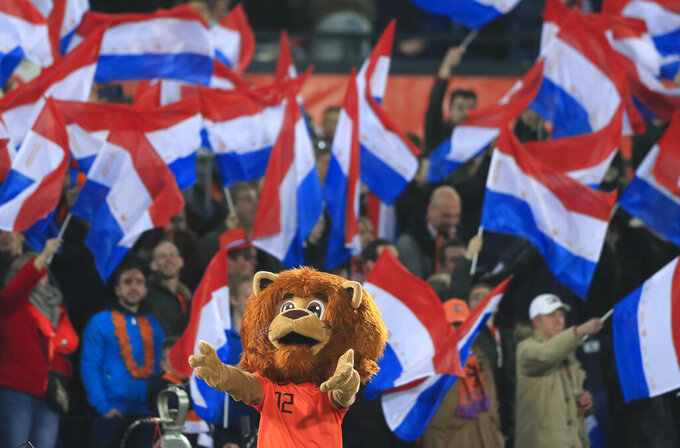 FILE - In this Netherlands Thursday, March 21, 2019 filers, fans wait for the start of the Euro 2020 group C qualifying soccer match between Netherlands and Belarus at the Feyenoord stadium in Rotterdam, Netherlands. With games scattered across 11 cities from London to Baku, this year's European Championship is going to be hard on the fans. Amid the coronavirus pandemic, it remains to be seen how many supporters will be able to attend matches or if any can follow their teams across borders into different countries. (AP Photo/Peter Dejong, File)

Fans traveling across borders to attend European Championship matches face a complicated array of entry requirements amid the coronavirus pandemic.

But — and the situation is still developing on a day-to-day basis — UEFA maintains that the 11 host cities spread around the continent are all accepting visiting fans.

“And then there are some countries where you just need evidence of a PCR test. So again, it changes from one country to another. But none of them have said, ‘We won’t allow foreign fans.’ It’s just that they need to, obviously, comply with the entry conditions at the time.”

UEFA is advising traveling fans to check a dedicated page on the tournament’s website for up to date information, as well as local government regulations.

In the 11 host cities, separated by four time zones and up to 4,700 kilometers (3,000 miles), each ticket holder will also be assigned a dedicated 30-minute entry time slot to arrive at the stadium. All fans will be required to wear face masks at all times and temperature checks and rapid COVID-19 exams may also be required at certain venues.

Making matters more complicated is that some nations have warned their supporters against traveling to certain countries for games.

The Welsh soccer association, for instance, has told its fans to avoid traveling to group games in Azerbaijan and Italy — both countries currently listed on Britain’s amber travel list.

While travel is no longer banned by Britain to countries on the amber list, the British government has advised people not to travel to those nations.

Russia, meanwhile, was still in the process of making special provisions for visiting fans coming to St. Petersburg — meaning that Sweden supporters might still be able to take a ferry across the Baltic Sea for group games against Slovakia and Poland.

Still, the easiest solution remains for fans to attend games in their home country.

Interactive fan zones and public viewing areas with strict COVID-19 regulations are being setup across the continent.

In Rome, for example, one of the public viewing areas is placed next to the Colosseum, as less than 16,000 fans will be allowed to attend the four matches inside the 72,000-seat Stadio Olimpico.

World Cup champion France is the biggest team that will play all of its matches abroad, with one of its group games in Munich and the other two in Budapest.

Germany currently lists France as a “high-risk” country and requires 10 days of quarantine upon entry, although ticket holders going to Budapest will not be required to quarantine under special procedures put in place by the Hungarian government.

Wembley Stadium in London will be at 25% capacity for group games and perhaps more for the final stages of the tournament.

“We expect to have more information in the beginning of June on what is going to happen,” Giordano said. “(Britain) are planning to lift a whole series of restrictions on June 21, which potentially could also mean a new increase of the capacity for the semifinals and final.”

The British government’s plans are contingent on falling COVID-19 rates, however, and the rates could be adversely affected by the Indian variant.

“It will depend on how the situation evolves there. Things can change quickly. But there is a potential to upscale,” Giordano said.

Still, even if capacity is increased, visiting fans for the final rounds should still have to abide by Britain’s entry rules.

“Obviously,” Giordano said, “they won’t know at the beginning of June which teams will make it to the final.”